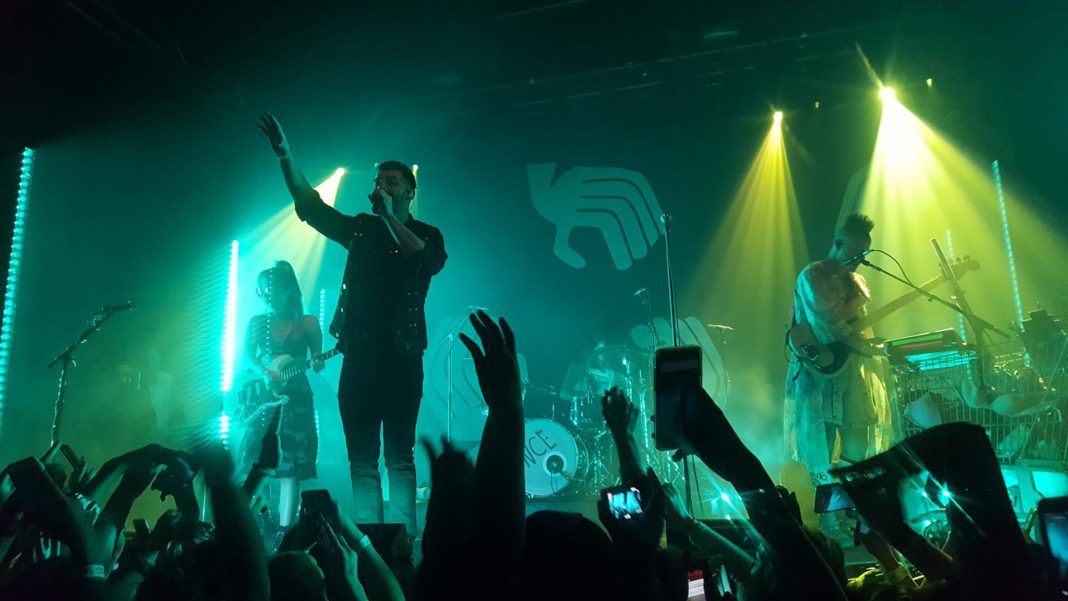 One wouldn’t imagine mainstream radio booths 93.3 and 103.7 perched outside of Granada Theatre, but that’s exactly what the chilly Saturday evening looked like. People had no complaints as they danced to The Weeknd, Ariana Grande, and Justin Bieber while waiting, eventually pouring into and the sold out show.

When opening band The Skins took the spotlight, everyone’s jaw dropped at how cool the bass intro was. Two voices could be heard introducing the band, but they couldn’t be seen. When the two vocalists finally appeared, they danced their way to the center, choreographed and energized. All the band members looked exceptionally attractive and moved by the music, catching the audience’s attention at once. To say the least, The Skins truly fit the definition of “opening band” and the purpose it should entail. The crowd was pumped and 100 percent ready for the main course.

After 30 minutes of more waiting and the same top 40 tunes, DNCE greeted the crowd with the Star Wars theme playing. Two storm trooper men marched into view, each waving gigantic violet DNCE flags. The crowd had a mixture of confusion and uncontrollable excitement as the anthem ended and the band members jumped onto the stage, wearing storm trooper masks and fighting each other with light sabers. This bizarre behavior set the mood for the rest of the night.

Throughout the show, the band acted like no band acted before. Multiple times the crowd threw undergarments and handcuffs onto the stage, in which DNCE took in gladly, hanging a pink lacy push up bra on a microphone. The set even had a shopping cart filled with lingerie and stuffed animals, a strange stand for their synth. The audience received multiple goodies from the band, ranging from t-shirts, guitar picks, a sweat towel, and even ladies’ underwear. A not so pleasant souvenir from the band included beer, spit straight from bassist Colt Whittle’s lips and into the singing fans’ mouths. On top of the multiple hand touching sessions and conducting singing instructions, vocalist Joe Jonas took a face timing phone from the crowd and sang to her for the world to see.

Towards the end of the show, the audience had yet another huge surprise. When “Pay My Rent” played, the ceilings suddenly shot fake money, all with the faces of the band members on them, followed by an astronomical amount of confetti while playing “Cake By the Ocean”. The crowd was overwhelmed. DNCE gave Dallas a show of a lifetime in the best venue possible. The night really couldn’t get any better with the amount of intimacy and gifts the band gave to their fans.