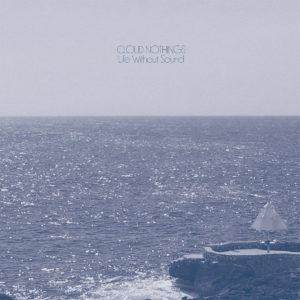 Originally garnering critical acclaim for their post-hardcore tinged indie rock with 2012’s Attack on Memory and 2014’s Here and Nowhere Else, Life Without Sound captures Cloud Nothings in a state of transition. “I’ve just been trying to write pop songs, in a way — or my own version of them” bandleader Dylan Baldi told Entertainment Weekly when discussing his writing process for the new album. In attempt to capture a more accessible sound, the band chose John Goodmanson, who is best known for his work with Sleater-Kinney, to produce the record. This decision led to an album that tones down the aggression and presents a clean production style that contrasts sharply from their past, relatively lo-fi albums.

Unfortunately, despite adding an additional guitarist to the lineup, the album is less lively and creative than their previous full length efforts. The band members have never been known for being great lyricists, but Baldi’s penchant for delivering his simple mantras with such conviction typically allows the trite songwriting to be easily forgiven. Yet, with Cloud Nothings’ aggression and hook filled guitar work mostly absent throughout the album, the poor lyricism becomes painfully apparent.

Due to the bland production and uninspired choruses, few of the tracks are able to convey the unique, colorful sound that was present throughout Cloud Nothings’ previous two records. Even Baldi’s typically vehement, engaging vocals are neutered to the point that he would blend into any standard indie rock fair. For example, when “Darkened Rings” gains momentum near the back half of the track, Baldi’s trademark strained shouts (typically the highlight of any Cloud Nothings track) are regrettably drowned in the guitars. Similarly, the rousing closing track “Realize My Fate” effectively builds tension throughout the track, but the inevitable instrumental freak out is disappointingly restrained.

There are a few successful moments throughout the record. Album opener “Up to the Surface” encapsulates the best aspects of Life Without Sound’s slickly produced, reserved sound. The track begins with a lone piano melody that eventually bleeds into guitars (reminiscent of Attack on Memory’s fiery beginning “No Future/No Past”). Riding a steady groove, Baldi forms a cohesive pop rock song while still retaining the passionate elements that made past releases so enthralling. Album highlight “Internal World” provides the album’s most memorable chorus and Baldi’s best vocal delivery. More than any other point on the album, the band is successfully able to truly embrace their pop ambitions during this song. The penultimate track “Strange Year” props up the tepid back half of the album with a moody, Sonic Youth-inspired jam. Functioning as the passionate core of the album, this piece has Baldi and the rest of the band finally loosening up and kicking ass.

While there is nothing inherently wrong with mid-paced, traditionally structured rock songs, Cloud Nothings prove with Life Without Sound that they still need some work before they can fully transition into this pop-oriented style. The band seems to be stuck in limbo between their past work and their current aspirations. As a result, Life Without Sound fails to distinguish itself from the plethora of uninspired indie acts.