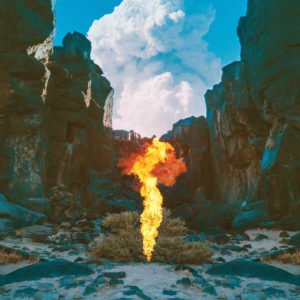 Simon Green’s work as a producer is a long arc. Electronica is without doubt a cyclical genre – waves of subgenres and the artists that ride along crop up and die off just as regularly as the tides – but the fandom surrounding a few pragmatic sounds and styles keep them alive and evolving, and most importantly improving. This is evident on the newest effort from Bonobo, Migration, his sixth studio album, taking and embracing downtempo from past albums and blending with the new-age electronic that Green has found along the way.

Notably over the past 5 years has the UK producer found his success in music, and really the people came to him for various reasons and/or particular songs (e.g. “We Could Forever,” “Cirrus”). Much like finding rare shells among the detritus after a storm, Green does this with songs on the album. As his sixth studio release, Migration is the natural stream of consciousness which grounds him after a serious whirl (or in Green’s case, a vast world tour). He picks up the pieces from prior releases, such as the straightforward downtempo of tracks from Black Sands, thumpers of heavy synth and rhythm from The North Borders, and classic sampling techniques from anything preceding and including Days to Come. This amalgamation on Migration is great, but wouldn’t go as far as stellar.

The conciseness of style from Bonobo’s two previous albums in a certain view is the thematic presence needed for an artist such as Green, but Migration is a mixbag. “No Reason” featuring the talented Nick Murphy dulls the grandeur and worldiness of the tracklist, and the mammoth “Outlier” might seem a tinge overbearing. But these are only scratches of the surface which keep the release from entering the stratosphere. The reason for Migration is more understood behind the music; a coordination between people collaborated with; places recorded at; connections and relations developed over travel. The expression is only true due to the prior success of Bonobo and this entry actually shows its complexity.

The impressive part is maintaining timbre over such a range of speed and samples. Lead single “Kerala” bridges the dance-centric feeling of his last album to the present but heralds the reminiscent “Ontario” on the album, and the rest is equally balanced as well. I suppose it doesn’t matter how much variation an album can hold, just as long as the feeling is told and heard. Spanning from track one to twelve, the vastness, temperate, and dynamic scope of the world and its sounds are played and true as performed by a migrant between homes and families.

“Break Apart” sums up Migration with emotional, slow and open sentiment. The feature with contralto wonder, Mike Milosh of Rhye, evokes such a passion for the world, as much as Bonobo wants to convey, and the lyrics tell a story both specific, and yet, universal. The production showcases the now-songwriter, Simon Green, as an apt and truly impassioned musician capable of a lot, but mostly as a producer with a love for cultures, sounds and is indifferently so.