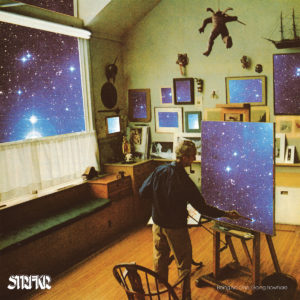 STRFKR’s name turns heads but at the expense of being written off or not getting airplay for its lewdness. STRFKR’s struggle with its name and being taken seriously as artists is demonstrated in the indie-electronic band’s newest album, Being No One, Going Nowhere.

The content of the album sees an unlikely mix between philosophy and FUN, from its focus on heavy dance-able beats, which contrast with the pensive title and samples from Alan Watts. It’s an audible shift from their previous four albums, which were held together by abstract but disconnected themes and lush dreamy soundscapes penetrated by Joshua Hodges’ boyish voice.

The album starts off with the infectiously catchy “Tape Machine” with whirring laser effects that takes you to straight into into the magical room of the album cover. The magic subsides a little on the second track “Satellite”, but picks up with the 80s synths of “Never Ever” and almost ominous chord progressions in “Something Ain’t Right.” “Open Your Eyes” opens with organ-like effects in an orgasmic intro that makes you feel like you’re zipping through space. One has to admire STRFKR’s attention to sonar detail; sound effects of what one would imagine twinkling stars and meteors to sound like are present in each transition between songs.  Hodges speaks to his middle school self in a coming-of-age themed piece that also reflects STRFKR’s obvious maturity in this album that is cohesive in both style and theme.

Despite the strong start, the album slows as it reaches the middle. This is marked the sixth track “Interspace,” which features a reintroduction of samples from the philosopher Alan Watts – also present in “Isabella of Castille” (Starfucker). STRFKR’s indie dance funk is oriented by a more philosophical lean, repositioned with two minutes of Watts’ soothing voice, matter-of-factly saying, “you are a function of this total galaxy, bounded by the Milky Way, and that furthermore this galaxy is a function of all other galaxies.”

After Watts’ finishes picking our brains, the rest of the album begins to fade and is generally unremarkable. The end track “Being No One, Going Nowhere” is the slowest and most mellow of the tracks. Hodges and a ghostly female voice repeat the title as a mantra, softly bringing the album to a close.

STRFKR’s new funky electronic lean is catchy and fun, but doesn’t plunge into remarkably new territory, instead staying familiar and true to their sparkly, celestial-humper selves. At the end of the day STRFKR never fails to compel us to dance and forget about the future of indie music.