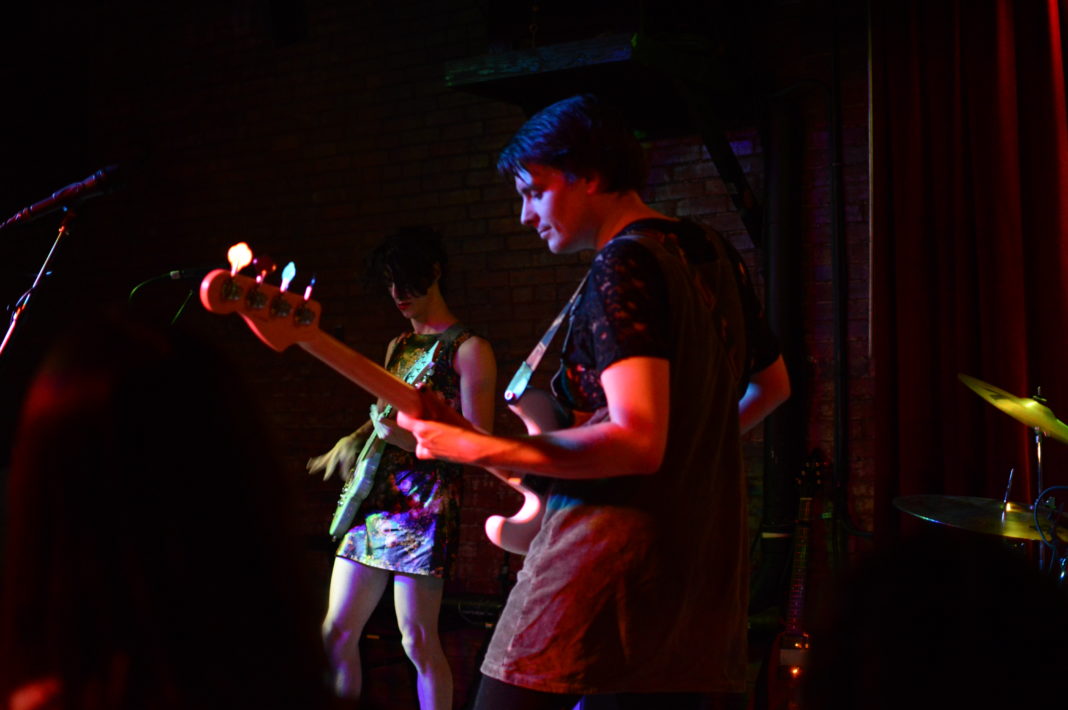 On a quiet Tuesday night in Deep Ellum, around a hundred young trendy and gender-bending people mingled around the stage at Club Dada. They wore thrift store treasures and glitter on their faces and smoked out back in anticipation for the intergender, queer punk band PWR BTTM (pronounced “Power Bottom”) to emerge and shower them all with happiness and gayness on their first headlining tour.

Lisa Prank opened the night with her upbeat songs of love and heartbreak punctuated with a sparkly foam crown from the aisles of Michael’s Arts and Crafts. Robin, the woman behind the band name, sported a sunflower dress and matching shorts and played beats off her phone sitting on a stool beside her while strumming her baby blue guitar. She gave off a socially awkward but friendly vibe starting with when she dropped her phone before the first song and supported by her acapella rendition of the first verse of “All Star” by Smash Mouth at the crowd’s urging.

Bellows followed with their four piece band comprised half of hip kids who look like my dad when he was their age (tucked in t-shirt, white Nike sneakers, baseball hat) and half of kids sporting the thrift store chic look (baggy black jumpsuit, brown capris with boots). It’s an aesthetic that makes sense considering they’re from the same scene as bands like Florist. They mostly played songs from their new album Fist & Palm. Their performance brought new life to my perception of the recordings with their fullness of sound on stage. The most entrancing part of their set was their drummer. From where I stood, I had a perfect view of him hunched over the small drum set, his round blue glasses sliding down his nose and his arms flying to support the three people in front of him. Altogether, I came away with a new appreciation for their discography.

Now we get to the real fun stuff. I knew vaguely what to expect coming into this show: fabulous thrift store drag outfits, runny makeup, the occasional joke. Still, I was blown away. In their backwards frilly robe over a patterned maxi dress with a mess of colorful makeup and glitter smeared on their face, Ben began the show telling everyone that this room is a safe space, then led his two other bandmates into the song “West Texas.” Right after, they told us the story of their odd experience on Grindr earlier that day with Nicholas, the new bass player addition, gesturing to illustrate the story. Liv, on the drums with crisp red lips and their curly hair clipped back, added quips and led into a different funny story.

That set the pace for the rest of the night. They balanced their short, energetic songs with conversations about Harry Potter, the Tulsa softball team with the same name as their album Ugly Cherries, Ben’s dad, and everything else. There was always something to laugh at, always something to sing and dance to. Liv and Ben switched instruments halfway through, then back again, though Ben is so tall that they stood often to encourage the crowd.

Right before the last song, they told us that, if we couldn’t already tell from the makeup, they have a flare for the dramatic. So, instead of walking off stage then returning minutes later at the crowd’s request for an encore, they wanted us to impress them so much that they would be convinced to not leave the stage. How? We had to make our best impressions of what a giraffe sounds like. If we were good enough, Ben would do a dramatic costume change and the band would play two more songs. The throaty noises started at the last note of the song. It took only seconds for them to pause before reaching the stairs and tell us to stop that noise. Ben ripped off their robe to reveal their dress and they played the two songs.

This was one of the funniest, most comfortable and uplifting shows I’ve been to. Well worth the sleep I lost to wait to take a selfie with Ben and Liv and ask Nicholas where they got their cute outfit. Dallas will wait patiently for PWR BTTM to return and show us how to be gaymazing.