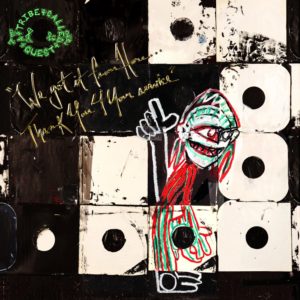 In 1993, A Tribe Called Quest dropped Midnight Marauders and changed the hip-hop game forever. Nearly everything on the album, from the seductive jazz samplings on “Electric Relaxation” to the positive party vibes of “We Can Get Down” cemented the LP as a nearly perfect project.

The album’s lyrics may be the groups best in its catalogue and is full of classic lines spit between Q-Tip and Phife Dawg, but the best may be when Tip confesses: “I really can’t say, I guess I laugh to keep from crying/So much going on, people killing, people dying.”

Over two decades later, with the release of We Got It from Here … Thank You 4 Your Service, their first release in 20 years., Tribe’s message of drowning out the terrible with a steady dose of the beautiful still resonates as loudly as ever and it couldn’t come at a more necessary time.

Earlier this year, Phife Dawg, the beloved MC who often layered flare and flavor to Q-Tip’s more straight laced and sober observations of the world, lost his lifelong battle with diabetes, taking away one of hip-hop’s most respected and joyful voices.

With the album already in the works, the rest of the group had to band together to finish …Thank You 4 Your Service without Phife’s contribution. Still, Phife had already laid out some bars before his passing and his impact is still felt. The Five Foot Assassin’s presence hovers over the project like a guardian angel, with verses on tracks like “Black Spasmodic” arguably ranking among his best ever.

Just like old times, Phife Dawg is witty, observant and sly, but listening to him on the mic is a bittersweet experience. Knowing Phife is no longer here to spread his love to listeners makes every syllable and simile he spits feel like a parting gift from a dear friend. It’s funny how, even in death, Phife Dawg is full of more life than nearly anyone else.

This loss is addressed directly on “Lost Somebody,” where Q-Tip and Jarobi pen a tribute to their fallen comrade and remember the good times. The chorus stressing for “No more crying, he’s in sunshine/he’s alright now, see his wings” acts as the final commandment to move on, but never forget.

Even though ATCQ is missing their brother in arms, they still manage to produce a project that is, track for track, one of the best hip-hop projects this year. Sonically, the album sounds years ahead of its time while simultaneously feeling like it could have been made right alongside “The Low End Theory.” There’s jazz samples a plenty, but there’s also Jack White guitars. This is a new Tribe, but it’s also the old Tribe, if that makes any sense. It’s accessible and ready for listeners both young and old.

While rooted in the folklore of the golden era of hip-hop, there is no superiority complex exhibited on this project. Kanye West, Anderson.Paak, Kendrick Lamar and Andre 3000 fit in right alongside longtime Tribe collaborators Busta Rhymes and Consequence without missing a beat. Like Q-Tip says on “Dis Generation” when speaking about Kendrick, J. Cole, Earl Sweatshirt and Joey Bada$$, the new breed of MC’s is the “gatekeepers of the flow” and Tip is making it clear he approves of these young bloods carrying the torch he helped light.

ATCQ has always featured some of the most outspoken voices in the culture, covering topics from rape to gun violence to drug use and on “…Thank You 4 Your Service” that mission is more clear than maybe ever before. For example, tracks like “The Space Program” lament the nearly impossible mission for black men to improve their quality of life, while “We the People…” acts as a scathing critique of this year’s presidential election.

Out of all the strong tracks on the album, “We the People…” might just be the powerful and important. The song tackles everything from gentrification to consumerism and the chorus of “All you Black folks, you must go/ All you Mexicans, you must go/ And all you poor folks, you must go/ Muslims and gays, boy, we hate your ways/ So all you bad folks, you must go” is haunting, especially for a song that appeared on an album that dropped just two days after the election of Donald Trump as President of the United States of America.

Just like in 1993, Tribe knows the score and it’s not good. For so many Americans, days are looking darker than ever before with a new president and an uncertain future. But once again, A Tribe Called Quest is giving out laughs to fight back the tears and beating back despair with hope.