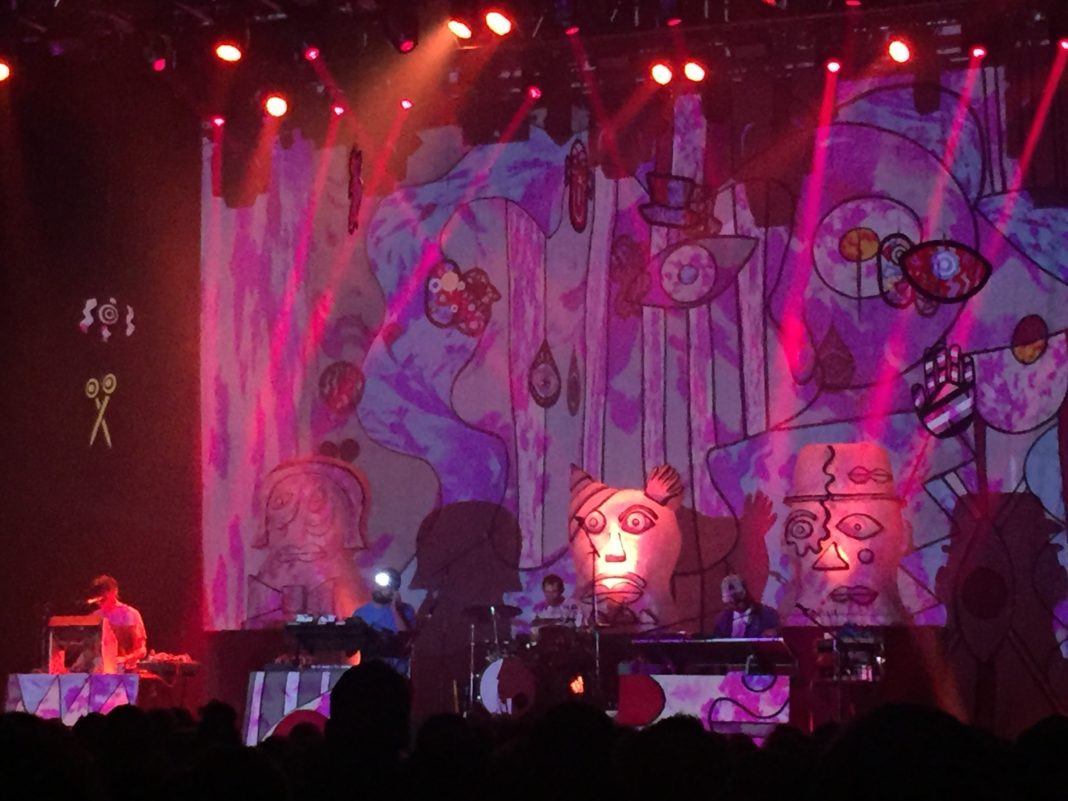 The house lights were off in the Bomb Factory as people filed in. Music was pumping through the speakers, but most occupants didn’t seem to notice UK DJ and producer Actress hidden behind Animal Collective’s set pieces. It became obvious that people didn’t realize what was happening.

Only a few people in the audience were giving Actress any attention, and an even smaller number were bobbing their heads. Actress’ music has been described as avant-garde electronic music, high concept, and not necessarily danceable. While Animal Collective fans who share love of a wide range of electronic music and its many possibilities would likely find Actress appealing, many fans who cling to Animal Collective for other reasons may not see any connection.

Actress put on a great set full of interestingly mixed tracks adhering to a slow, hazy theme. The only problems were the audience not getting engaged and the fact that the audio sounded fairly bad at times– a problem that was hard to discern given Actress’ lo-fi production techniques. It wasn’t until Animal Collective came on, that the audio in the Bomb Factory really started sounding atrocious. As a fairly avid Animal Collective fan, it was hard to accept just how poorly the show went. As AnCo drudged through multiple songs off of their new album like “Floridada” and “Spilling Guts”, it became apparent that even the songs off their new album (which I wasn’t a huge fan of) sounded muddied and drawn out. There were frequent buzzing and feedback issues that were obviously not intentional, or if they were: were a poor decision. While the Picasso-esque visuals were entrancing, and bubbled and warped in true Animal Collective fashion, they just weren’t enough to overpower the muddled rhythms, out of sync synth delays, and cringe-inducingly dry vocals.

Even when Animal Collective played a couple tracks off of their acclaimed album Merriweather Post Pavilion, such as “Summertime Clothes” and “Guys Eyes”, they seemed to be warped and distorted in the style of the rest of the set, and just didn’t hit home. While there were some hardcore Animal Collective fans dancing and singing along to the swamp of sound, faces across the vast audience stared in confusion as the show they came to stopped resonating and started frustrating. After the show, multiple groups of attendees were heard discussing the show in disappointment.

Animal Collective are a great band and many factors can contribute to a bad show. It was probably a one-off event, but it was still the event that the rest of the audience and I were forced to endure.