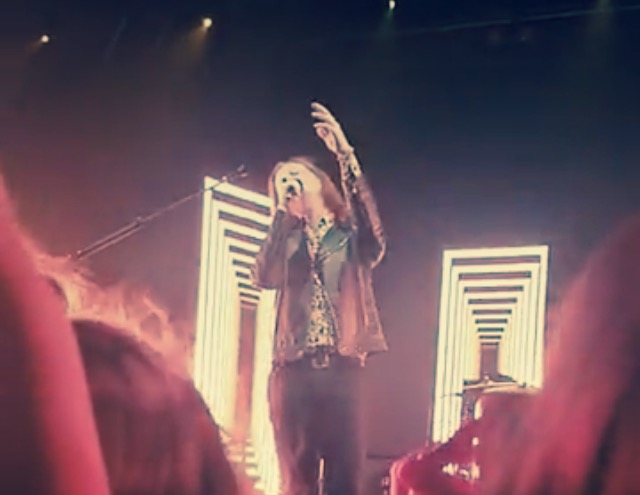 “In the South Side Ballroom / Two Door Cinema Club,” the large letters towered with an aged dandelion background behind them. The day was filled with clear skies, 80-degree sun, and an unpredictable excited air. Two Door Cinema Club hasn’t been to Dallas since the spring of 2013. Arguably, the music scene has changed since the last time the Northern Irish band has set foot on the plains.  A lot can change in three years: middle schoolers becoming high schoolers, high schoolers becoming college students, college students becoming working adults, working adults becoming senior citizens. When doors opened at 7, the line of all ages poured in.

People who haven’t had a clue about the opening band wore puzzled eyes while the stage was getting sound checked. As small as the lineup, the stage had a single drum set rose high to standing level, alongside a drum pad, keyboard, microphone, and a guitar. To everyone’s surprise, when Jack Garratt took the spotlight, his entrancing body rolls and gritty vocals caught the whole floor’s attention. His skill was unsurpassable, handling multiple instruments at once, all in perfect tempo. His light conversation with the crowd was as charismatic as the passion that poured into each song. By the end of his petite 45 minute set, people definitely wanted to sport a “33 Garratt” jersey from the merch table. After an antsy intermission, the main talent finally took the stage. Vocalist Alex Trimble and guitarist Sam Halliday were dressed to the nines with blazers, nicely fitting pants, and sparkly shoes: the staple touch that they wore to many performances before. On top of the amazing wardrobe, the visuals were remarkable: six humongous rectangular screens lined up around the band. The graphics complimented the music so well, the crowd felt like they were in another dimension. Sometimes the pictures would match the lyrics, sometimes they would loop geometric shapes, and sometimes they would have clips of black and white movies.

The usual idea is that bands use visuals to distract the audience from their poor show presence. On the contrary, TDCC had both astounding visuals and performance skills. Each of the members had their own staple stage dance moves. Bassist Kevin Baird jumped up and down, shaking his head side to side and occasionally standing up on the drum set to share a funky groove. Sam had an incredibly adorable way of shuffling his feet across the floor, the crowd ready to catch him if he ever falls. Alex was purely fabulous, his arms posing in the air, motioning the lyrics he sang, and stealing the front row’s hearts with his charming proximity. Even the people in the very back of the room were shouting and singing their lungs out. Even after three years, TDCC still knows how to please fans: playing songs from their first, second and third album – that is to be released in two weeks. The sneak peeks of the upcoming album Gameshow definitely had the crowd begging for more new live music. Everyone poured out the doors at the end of the night, fondly looking up at the large South Side sign. Fans closed their eyes and remembered, breathing in the new fall air, repeating the night all over again.