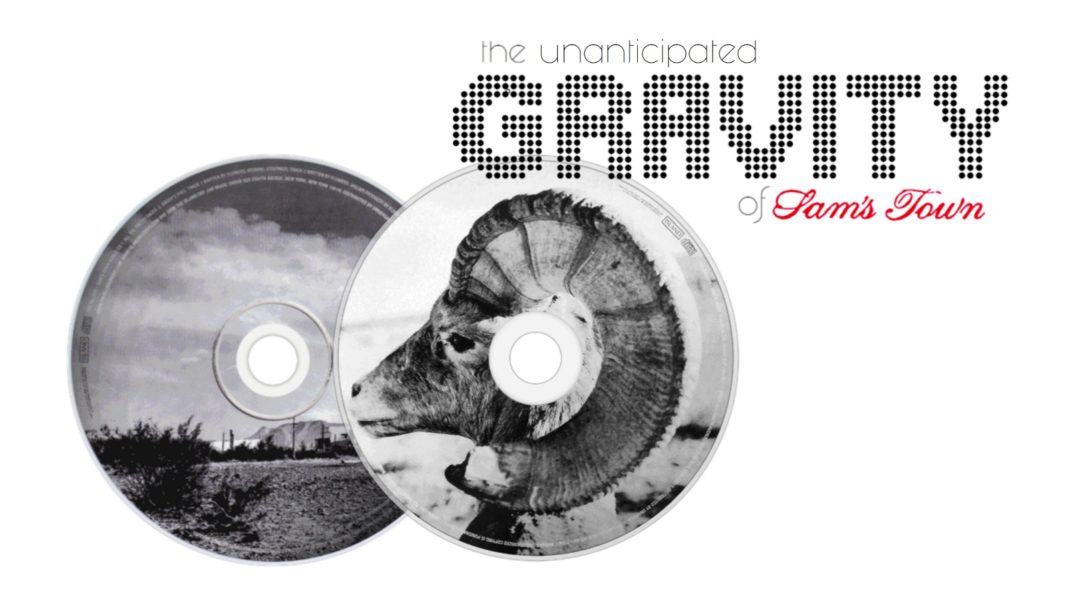 While the rest of the country descended into emo-madness over Fall Out Boy and its subsidiary label-mates, and teeny-bopper cornerstones J-14 and Tiger Beat printed fold-out posters of Gerard Way en masse, The Killers floated the boat for those still clinging to the baseline of American rock. In 2006, The Killers released their sophomore effort, the polarizing Sam’s Town. Lead singer Brandon Flowers claimed that this was the album that would “keep rock & roll afloat” for the next generation. A pompous claim, sure, but maybe not as outrageous as it initially seemed.

Sam’s Town is something of a forgotten album, awkwardly placed between a wildly successful debut and a comfortable third album that would solidify The Killers as a tent-pole of American popular music. The problem middle child of the bunch, Sam’s Town, was outright slammed by critics whose abhorred reactions no doubt affected the album’s sales as well as the long-term critical perception of the band. Rob Sheffield of Rolling Stone famously gave the album two stars out of a possible five, calling the album “not a good move” and deriding its creative direction as pompous and cliche. Even so, time certainly seems to have softened the larger public up to the record with Rolling Stone’s own readers eventually heralding Sam’s Town as the most underrated album of the decade in 2009.

So what is it? Sophomore slump or an under-appreciated masterpiece?

It’s impossible to reflect on Sam’s Town without first making a couple of quick pit stops at the albums that bookend it: the early-aughts fireball Hot Fuss (2004) and the return-to-form Day & Age (2008). On Hot Fuss, The Killers leaned into all the gritty glam that their hometown of Las Vegas had to offer and came through with eleven cuttingly perfect, synth-laden bops. The UK music press hyped The Killers to popularity, smash singles “Mr. Brightside” and “Somebody Told Me” elbowed their way into Top 40, and the album went down in multi-Platinum-plated history.

Day & Age, The Killers’ follow up to Sam’s Town, was able to blend the glammy sheen of Hot Fuss with the band’s newfound, all-American wholesomeness. Funky basslines and saxophone solos are thrown into the sonic stew and, somewhat surprisingly, it worked. Sam’s Town tries to capture Americana for an unwilling age, but Day & Age gets closer to this ultimate goal. Its imagery of celestial beings and cries for environmentalism certainly felt more in-line with the concerns of the day than the leather jacket wearing, Marlboro-puffing faux toughness of Sam’s Town.

Sam’s Town served as a warning to other rock outfits of the same era: stay in your comfort zone and stay humble. Which is a shame. Not to pile onto the dozens of other think pieces weeping over the decline of good ol’ rock & roll, but there is a strange dualism within popular rock where everything is either so-woke-it’s-nauseating or just plain meaningless. The Killers have tapped into the songwriting magic of the stadium rockers before them, consistently turning out music that is layered in singalong, ‘insert-yourself-here’ meaning. Sure, they might miss the mark a few times in their experimentation, but you never hear a Killers song and wonder what deep end they swan dived off of. It’s always been them.

Not a single review of Sam’s Town makes it a paragraph in before jumping at the chance to let you know that this album was influenced by Bruce Springsteen and his ilk. The critics aren’t wrong in their assessment – The Killers owe an increasing portion of their sound over the years post-Hot Fuss to The Boss. Fourth album, Battle Born (2012), is essentially 51 minutes of The Killers trying their hardest to recreate the glory of the last minute and a half of “Born To Run.” But Sam’s Town is no cookie cutter ripoff. It has more in common with its predecessor than critics ever admitted with the sweeping synths on “Bones” and “Read My Mind” and the monotone chug-a-lug beat of “Uncle Johnny” following in the footsteps of “Andy, You’re A Star.”

“When You Were Young” is a magnificent example of adherence to the Springsteen formula: crashing cymbals, a raging glockenspiel solo, bombastic guitar, and warbling, stadium-filling vocals. It’s brimming with youthful confusion and the promise of something better on the horizon. But other standouts like “Bling (Confessions Of A King)” and “For Reasons Unknown” are The Killers at their most underrated. Tracks like these bridge the gap between The Killers’ diverging penchants for new wave and heartland rock.

The lyricism on Sam’s Town parallels what must’ve been Flowers’ young ambition coming to terms with the darker reality of the industry he’s broken into and and pressures of crafting an album that was destined to be divisive. The album reads as an epic, arms-open-to-the-sky prayer to anyone who will listen – a search for self and a search for God. Flowers, whose devout Mormonism has been something of an eyebrow-raiser in the band’s mythos, peppers the album with forthright allusions (“He doesn’t look a thing like Jesus”) and yelping pleas for clarity (“If I only knew the answer / I wouldn’t be bothering you, father”). He pokes and prods at his faith, but never loses it.

At their worst, The Killers can be shrugged off as inoffensive, mass appeal festival rock. But at their best, The Killers are a band that has greatly shaped the taste of a generation. In that way, the album does deliver on Flowers’ farfetched promises to keep the rock & roll flame lit. Just as the band entered into an awkward phase of teenage gangliness in the wake of their debut, so did hordes of then-middle schoolers who clung to The Killers’ music like a life raft. Sam’s Town is an album about yearning for something better, but also a stunning hopefulness that the something better is on its way – a message that any young adult needs to hear and believe. After all, Flowers sings, it “seems like heaven ain’t far away.”

Sam’s Town is a real place – a Las Vegas mega-casino Brandon Flowers grew up across the street from, in fact – but it’s also a stand-in for Anywhere, USA. It’s a liminal space, and whether that place is your forgotten middle America hometown or the space between where you are and where you want to be is up to you. For me, Sam’s Town is driving through your own two-star town, desperately wanting to free yourself from the monotony. It is watching your childhood years grind to a halt as your adulthood responsibilities and decisions fly towards you full speed ahead. Sam’s Town is feeling too damn young for everything life is throwing at you. But it’s also the promise and the hope that “We’re gonna make it out of the fire.” We’re going to get to that other side someday, somehow.