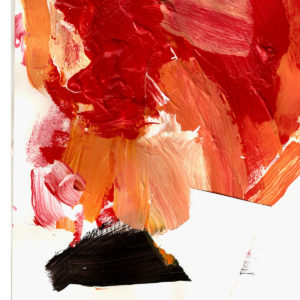 Antonio Mendez is probably unsure as an artist. Like so many before and after him, musical presence can only go so far, especially without a formal album, and constant self refining/ experimentation/ exploration can be more taxing than fruitful. A total divergence in sound is often frustrating to listeners, as well, so Mendez just did away with his Lindsay Lowend moniker altogether. But that wasn’t enough. Enter: Pigarette, the blues induced intricacies of Lindsay Lowend’s future; proving to be better and more consistent than past efforts, but not without its trade-offs.

The quirky, whimsical bedroom-beats that many have sought asylum and success within soundcloud, bandcamp and further, no longer has the same pull and probably not the same satisfaction as it once did. Mendez’s talents wouldn’t just waste away however – the need to create is incessant – and Pigarette is the appropriate outlet for this expression. Poinsettia is a EP of sorts that display the sunshiny, affectionate musicalities as traditional as blues rock may come, but evolved. Guitar help from Beau Diakowicz has a most notable influence on the collaborative process, or maybe considered a feature with tracks like “Bodø” (Poinsettia) and “Anapola” (Anapola). Together, though, smooth sensibilities of are the product of the joint effort, undoubtedly, where both Mendez and Diakowicz come correct.

The promoted “Poinsettia” has instant stylistic fulfillment per Lindsay Lowend, but that doesn’t do it credit. Albeit Lindsay Lowend production expands into ambient and dark territory, the similar compositions are derived from electronic synthesization where looping and impressing on a theme/riff is articulated with texture. The use of guitars and gentle rattle of drums to a quickened rhythm is mono-textured, at least achieved by the project Pigarette, and the only feeling brought out is bright and grinning.

Extrapolations even improve upon this to the neo-soul “Traps” featuring the exquisite vocals of Merryn Jeann. Both Anapola and Poinsettia beckoned for a feature, where the obvious choice motions to the jazz insight of vocals. The lyrics sing “My body is tired from my heart’s confusion,” paired well to the rolling bounce of the instruments like an old cheese to a fine wine. The concise and consistent nature follows, but the variance is minimal.

Only the track “Transit” gleans from a more industrial space, pushing the tempo, and because of this is an outlier on an otherwise thorough walk through a vivid and clear image of a cool red. A la cover art, this makes sense of the mood.

Mendez seems to have leaned right and left until he decided to roll over and find himself on Pigarette. As a project, his and Diakowicz’s expression is accessible and sweet with an off kilter take at blues guitar. The pairing is effective per two releases this year – unknowing if this is a short pursuit or a musical shift – but the evidence of good music, smooth in performance and centrally radiant, shows up as a contending persona for what Mendez wants to produce.