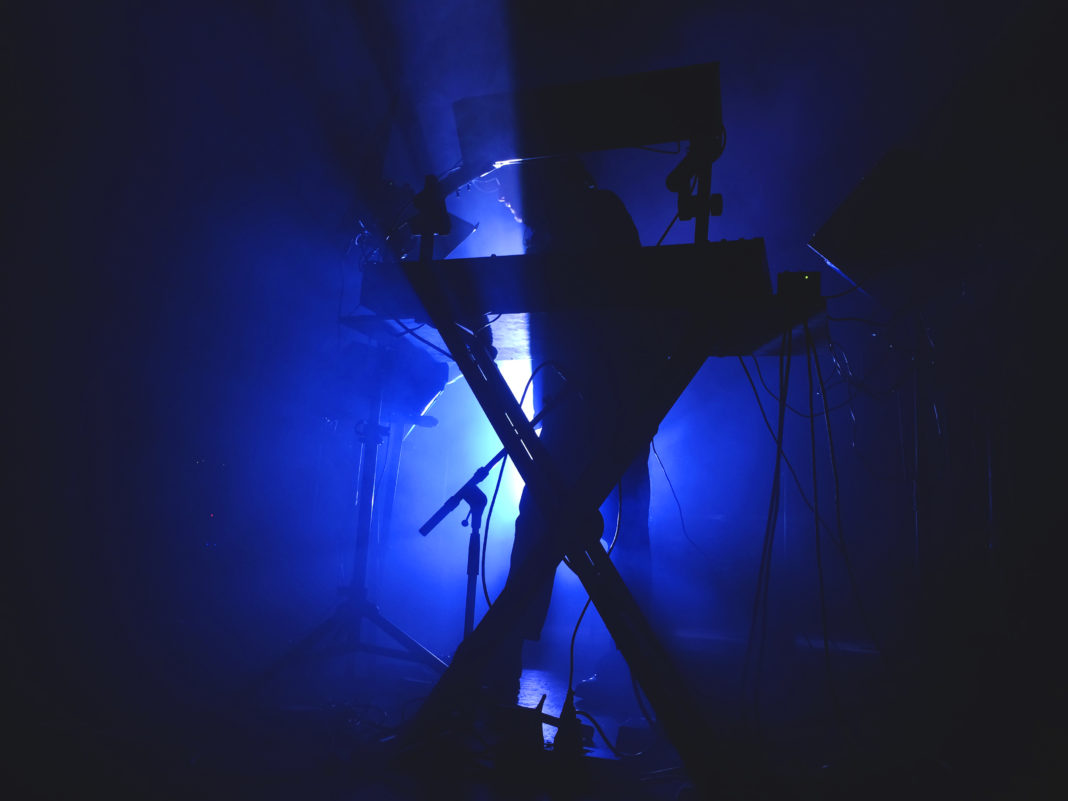 Granada Theater piled in more people as the clock struck closer to the 9:30pm set time. No opener was billed. By the minute, people made their way to get their central view of the impressive layout of synthesizers, hanging wires and an all-encompassing light coordination. Nicolas Jaar was eminent, and nearly on cue he revealed himself and approached his controls.

Any futurist would be dazzled by the synthesized textures and impeccable displays that underlaid most of Nico’s starting pieces. From introduction to transitions, a twinkling, bleeping metallic quality trickled across the speakers, stirring up a cosmic sonic scene. The dim of the lower lights went from faint to shallow, then to bright, then to beaming into the faces of the audience, casting a silhouette of the setup. Colors spilled over Nicolas Jaar and his tech with the feeble and shine of oscillating light, matching the reverberation of the lowest bass that throbbed in and out. No rhythm was apparent, but a purely auditory experience paired with the impressive light display to match was explored and presented, grabbing everyone’s attention for the first half of the show. A gradual yet consistent interweave of sounds kept the climactic nature going long, at one point increasing the intensity and velocity of the lights which struck a deep and deathly red and eventually gradienting to white. The white soon receded, marking the end of his string of songs and the crowd let out their first cheer.

Close to an hour through the set, a necessary pause was held for technical repairs. The audience’s building chatter was soon enough broken by the distorted thump of a drum beat through the sound system. Many let out a “whoa” in response and reoriented themselves toward the stage. Massive orange lights emitted their color from behind him, thickening the veil between him and the crowd as the fog, which poured from a seemingly unknown source, became occluded by tangerine light.

Nico’s silhouette still stood tall behind the controls as the gentle and quiet tones of a kick took shape. The familiar rhythm of a low bass became the bump of the track in four-to-the-floor manner, filtering in the warm and welcoming melodies of notable songs to a cool and enticing pace. The crowd went from swaying idlers to dancing bobbers when songs like “The Three Sides of Audrey and Why She’s All Alone” or “Fight” infected the floor, taking intricate and experimented directions as Nicolas Jaar modulated his way through. The variety for this half of the set until the end of the show felt something of a DJ set, concise and energetic throughout, bringing strong rhythms and fan favorites to the (now) dance floor.

The transitions quickened and slowed to accommodate the extensive number of tracks. “Swim” took the set time past 1.5 hours; the lights swallowed the stage in a vibrant palette of peach, indigo and magenta. The anticipatory halt of the song quickly dimmed all lights to a black. He waved goodbye, only to be beckoned back for an encore. The continuation of dance-infused music kept the motion, and more. The auditory pleasure and physical gesticulation was without doubt succeeded this fine night. Even without any noticeable performance of his newest release, Sirens, the electronic maestro secured his place as a still potent artist.