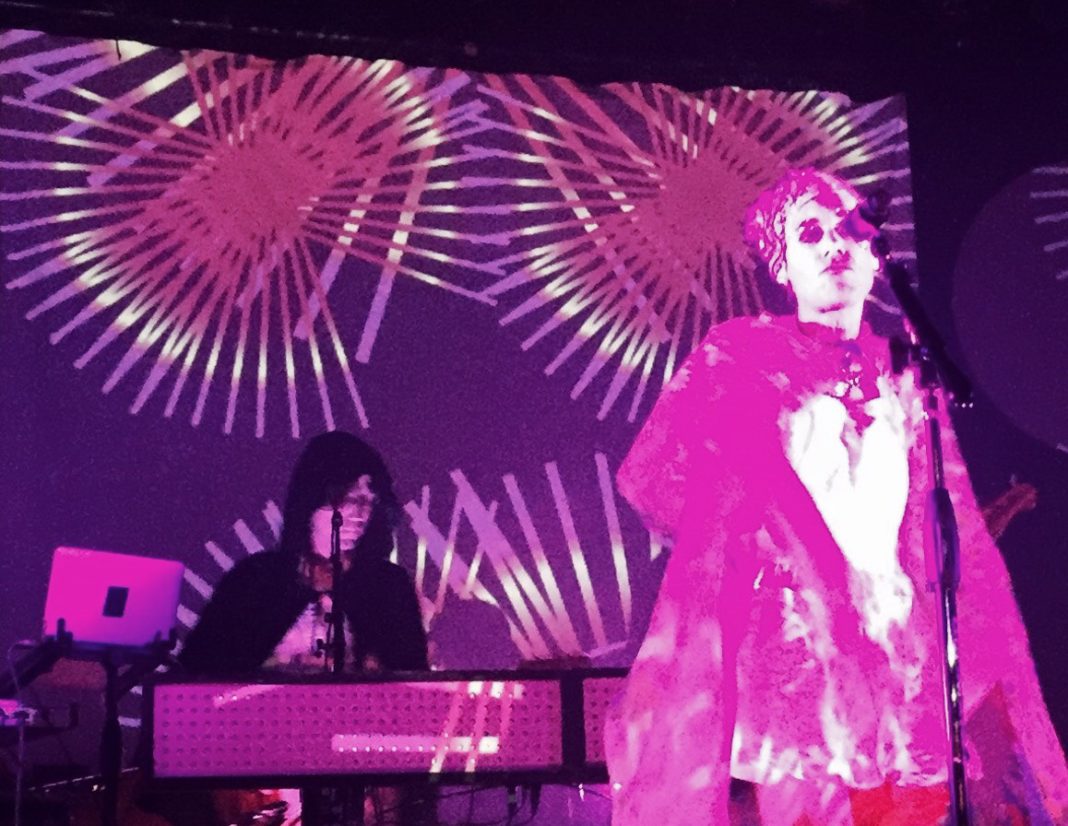 Last night, indie-pop cult heroes of Montreal made an electrifying return to Deep Ellum’s Trees venue. This time around, the group were armed with both their EDM-inspired newest record and their psychedelic mid-00s classics.

The standing room of Trees felt somewhat barren around 8:00 PM, but opener TEEN filled up the space with their kinetic art-pop. Lead singer Teeny Lieberson filtered her voice through various eerie robotic effects, harkening back to the vocoder mastery of Laurie Anderson or Kanye West. TEEN’s nimble rhythm section suggested a potential dance party, but the crowd wasn’t invested enough to take part.

Fortunately, by the time of Montreal made their way to the stage, the venue was packed to the gills with young folks ready to shake their psych-pop groove thang.

The group is notorious for its stage theatrics, which were on full display immediately. Pentagrams appeared on the screens as the musicians, shrouded in monk-like hoods, trudged forward to their instruments. If a concertgoer hadn’t heard the band before, they might’ve assumed they were about to watch a bunch of Gothic monks.

Frontman Kevin Barnes soon threw off his cloak to reveal an apron, flowing cape, and scarlet tights. The crowd erupted into applause as the band launched into their new record’s lead single, “It’s Different For Girls.”

The performance had nearly enough costume changes and dancers to rival a Broadway show. Looming Dia de Los Muertos-style creatures, stripper cops, and even an animatronic possum pranced on stage at various points. Most memorably, a penis with a Donald Trump mask bounced around, egging on the audience like a wrestling villain.

Barnes himself radiated in the role of demented dreamboat, his strutting and gyrating reflected his songs’ maniacal lust. A running motif in Of Montreal’s work is the fluidity of sexuality and gender, which Barnes reflected in his various costumes. From B-52’s-style wigs to his Kim Gordon punk chic look in the final part of the set, his wardrobe stretched the boundaries of standard masculine indie fashion. Even with all the hyper-activity around him, his voice was in full form, especially his killer falsetto on tracks like “Our Riotous Defects.”

Of course, all the showboating in the world is meaningless without great material; fortunately, the band had that in droves. Barnes and crew deftly blended their newer electronic singles with their art-funk classics like “Gallery Piece.” The slinky basslines, thumping drums, and candy-coated synths compelled the crowd to cut a rug. A sea of young hands, most with black X’s sharpied on, swayed to the band’s lurid jams. Newer songs like “Ambassador Bridge”, which felt robotic and clinical on record, were transformed by their skilled full-band setup. The sound mix was surprisingly stellar for Trees; no instrument sounded overpowered or tinny.

Of Montreal’s blend of transgressive sexuality and tight musicianship recalled that of David Bowie or Prince at his mid-80s peak. Clearly, the two departed icons were on the band’s mind as well. For the encore, Barnes went sincere and saluted the “two beautiful people we lost this year”. The band then launched into a spirited cover of Bowie’s “The Man Who Sold the World” and Prince’s “1999”. The night ended with perhaps their most iconic number, “Heimdalsgate Like a Promethean Curse.” Underneath the song’s neon façade is a desperate, wounded heart, pleading for deliverance from depression and drug abuse. “Come on, chemicals!”, the crowd yelped, saluting the rush of serotonin and adrenaline a great performance brings out. The band departed Trees on a typically exuberant, poignant note. With their dazzling display of showmanship and musical chops, of Montreal cemented their place as one of the most exciting live acts in indie music.