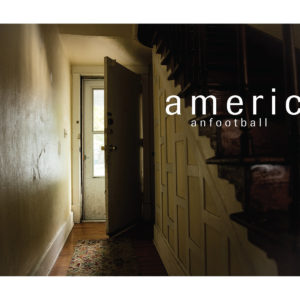 Despite the two-decade difference in between American Football LPs, the two self-titled records sound remarkably cohesive in style. This will please the fans that are expecting another LP1, or those wanting another new Owen release this year. However, some may criticize the band for sticking with what they know instead of branching out.

LP1 gained a cult following during American Football’s downtime; the twinkling guitars ultimately influencing the sound of emo and indie bands to come. A sizable portion of American Football’s current fan base were less than ten years old when their debut album was released in 1999, almost certainly unaware of the band’s existence. They’re grown up now, just like the band, who got their start young. After American Football Football’s disappearance, the members continued to make music in other projects, like Joan of Arc, and Owen, front man Mike Kinsella’s stylistically similar solo project. These projects gave the members the chance to mature as musicians, which becomes evident in the new record.

From the analytical perspective of a fan, American Football, as with any band’s hiatus, seems to be in a bit of a dilemma with LP2. Fans may want a direct continuation of LP1, but as time passes after the first listen, tastes change. Many fans have musical interests that take precedence over twinkly emo now. It’s understandable to want to relive the emotions that came with that first listen, which for many people was a gateway into emo as a genre. However, if fans have a new set of musical preferences, there’s a chance LP2 will fail to deliver the same emotional experience, no matter how similar the music may be. It’s hard to follow such a beloved album, but the band themselves believe fans will be pleased.

Things have changed for the band as well. The last time Owen played a show in Dallas in 2013, fans pleaded for Kinsella to play a rendition of LP1’s well-loved track “Never Meant.” He explained that he wrote that song a long time ago, and wouldn’t play it because he wasn’t in the same emotional place anymore. To revisit it would be insincere and painful. It’s a bit unfair to expect an album that came out so long after the previous to share the same emotional content and musical influences, but that doesn’t stop fans from wanting it anyway.

American Football won us over back in the day with post rock-esque atmospheres built from repetitive guitar tapping, sympathetic lyrics, and nostalgic romanticism.  On LP2, as opening track “Where Are We Now” professes, “We’ve been here before.” Everything remembered and loved from LP1 can be found again, hust more refined. The warm brass lines in “The Summer Ends” can be found once more in tracks like “Everyone is Dressed Up.” Pure, clean twinkling abounds. Similarities aside, LP2 doesn’t feel like American Football compromised their writing in order to live up to LP1. It’s just as wholehearted.

“Born to Lose” brings back the atmosphere of the first album; trance-inducing repetition with driving energy.  Some tracks, like “I Need a Drink (or Two or Three),” humor at what would-be a full-band version of an Owen track. Kinsella’s vocals have matured well over Owen’s fifteen years, and his solo songs have a knack for satisfying twinkly guitar cravings. The lyrics are poetic and romantic, but aren’t without that tongue in cheek emo charm: “I feel so sick/Doctor, it hurts when I exist.”

From an objective musical standpoint, nothing is missing from LP2 that should negatively impact listeners’ feelings towards it. The band successfully produced another enjoyable record within the conventions of the genre.

LP1 was lush, like laying on the roof of the famous “American Football house” staring up at the stars in your heartbroken youth. In LP2, it still feels like you’re sitting in that house, looking out the window on a cool, Midwest afternoon. It’s nostalgic and bittersweet. But it’s brighter outside now, and you’ve grown up— more understanding of the world but no less sad about it. The atmosphere of LP2 is a little more dry, giving the album expansive imagery, like walking across the wood floors of the unfurnished house. Ready to move, ready for change.

The sequel is pensive and with charm – an album that deserves your consideration given the context of its release. It exists on it’s own and will tug at your heartstrings if you’ll let it.