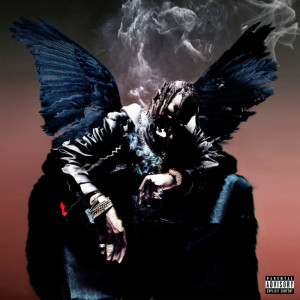 Travis Scott is quickly becoming one of hip-hop’s most iconic voices. The “Antidote” rapper, whose sound falls somewhere between the braggadocio of Kanye West and the tortured, self-consciousness of Kurt Cobain, swings back with a vicious left hook on “Birds in the Trap Sing McKnight,” his heavily anticipated sequel to 2015’s “Rodeo.” And true to form, the Missouri City, TX, native spits bars that are equal parts celebration and somber soliloquy.

The ominous signs of things to come start with the album cover, where a winged Scott sits on top of a throne, his face covered in a cloud of smoke. The message is made loud and clear from the get go: this is not music for do-gooders. This is music for night owls and ne’er-do-wells. Scott has made a career so far out of making songs that are heavy on the bass and light on morality and not much else changes here. This is music made with late night drives in cars and excursions to the seediest clubs in mind.

But Scott brings a little more to the table on Birds in the Trap than what critics have come to expect out of him. Sure, songs like “sdp interlude,” which stands for “smoke some, drink some, pop one” and “through the late night” will fill the playlists of all-night ragers from coast to coast, but songs like “the ends,” the haunting, Andre 3000-assisted opening track, reveal a deeper side to Scott that is rarely, if ever, seen. When Scott screams “Only you can stand my mind/only you can fix inside,” it’s unclear if Scott is talking to a lost love or a lost listener. Either way, what is evident is the weight of his newly acquired fame that has taken its toll on Scott.

“McKnight” is an odd mix of ‘bangers’ – straddling the line between numbed-out Xanax anthems and screams for attention – and love from Travis Scott, who isn’t riding solo. Features from Kendrick Lamar (who steals the show on “goosebumps,”) Bryson Tiller, 21 Savage and Kid Cudi round out the project and fit perfectly on the album. Nothing here is out of place and everyone fits perfectly with Scott’s auto-tuned croons.

If “McKnight” has a central thesis, it may come on “first take,” a love song that stands out for the final lines of its hook: “Let you tell it/What’s mine is yours, what’s yours is yours/All the signs I ignored/I play love like a sport.” If love is a sport, then Scott is playing a losing game. This isn’t the music made by a man happy in his place in his life, but of a man caught between the fast life and the simple life; between lust and love. If birds in the trap sing Brian McKnight, Scott is singing a lonely, spacey serenade. Some birds fly in flocks, others fly solo. On Birds, Scott proves he’s part of the latter group rather than the former.