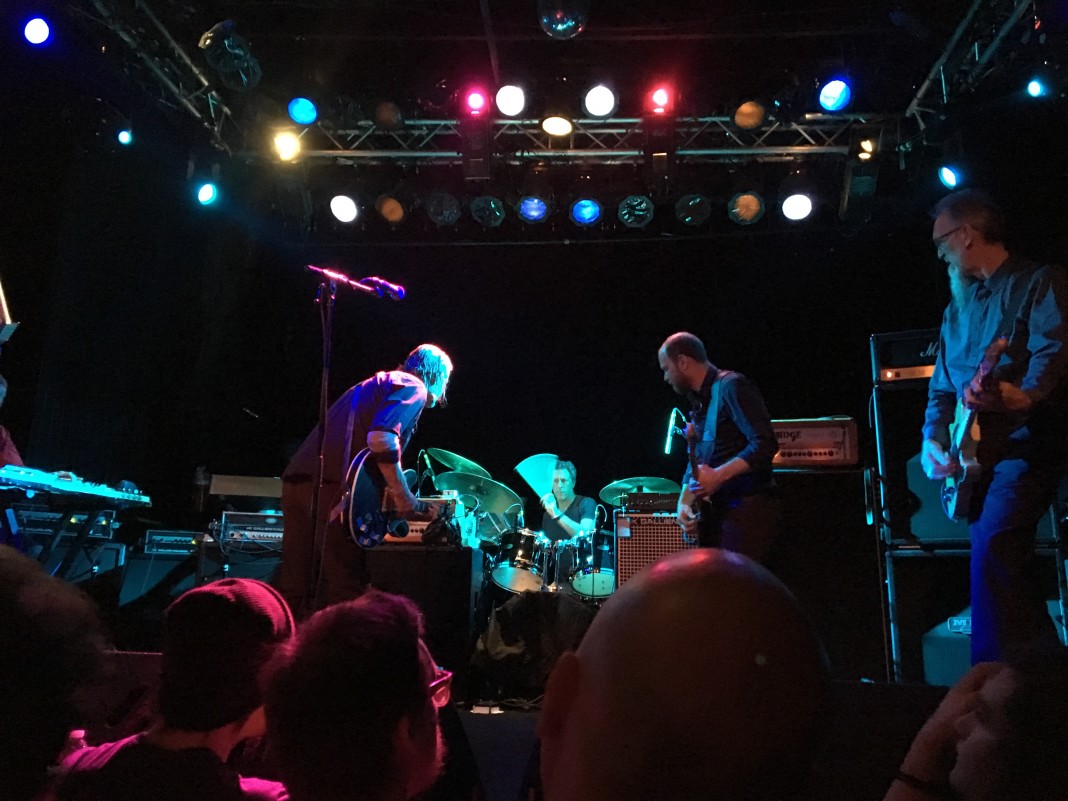 Swans returned to Trees once more in support of The Glowing Man, the last album we can expect from the current version of the band. There was talk in the crowd of this being their farewell tour, a permanent end to Swans as a whole, but that is doubtful. Although Michael Gira himself might describe The Glowing Man as “valedictory,” their performance gave no indication that Gira is finished with music just yet.

In true Swans fashion, the selected opener, Baby Dee, was equally as odd as Swans but in an entirely different way. She sat towards the front of the stage with her accordion, accompanied by her nephew on the classical guitar. Behind them, all of Swans’ gear filled the rest of the stage. Their setup was sparse and delicate by comparison, but Baby Dee soon filled the room with her fascinatingly warm and raspy voice. She portrayed so much character between her expressive vocal delivery and strange yet charming storytelling – “this song is about [her nephew’s] granny and the day Jesus beat her up.” The accordion’s ability to give droning minor chords a brightness lent itself well to Baby Dee’s songwriting, which paired lyrical themes of loss and punishment – “I’m gonna get it when I get home, he’s gonna kill me when I get home” – with harmonies that often felt like a glorious, but bittersweet, march. Her nephew proved to be an excellent accompanist; he was extremely attentive and watched Baby Dee carefully as she played, nodding to himself as he intently laid down clean and pronounced notes that balanced out her lush playing. Her accordion sprung a leak at some point during the set, and although she told the crowd it was much more effort to play, she executed the rest of the set so flawlessly no one would have known something was wrong.

According to set lists posted online, Swans only played six songs over the course of their two and a half hour set, but there’s no point in counting when each piece feels like several songs combined. The first hour flew by surprisingly quick compared to how punishingly long their set felt when they came through in support of To Be Kind, and overall just less exhausting.

Although the sets were the same length, there was a difference in tone that was immediately noticeable. Rather than being particularly cacophonous, Swans focused on repetitive lines and playing with time and structure, often merging ideas from familiar songs with previously unheard material. The songs felt brighter and less aggressive (of course, still aggressive by the standards of any band other than Swans). That being said, is it really a Swans show without some sort of tension directed out from the stage? Gira snapped at someone in the crowd shortly into their set, briefly interrupting his vocal line to bark “Put that phone away” and send a death stare their way. Those in the audience who had been guilty looked at each other sheepishly and put their phones away, because when Michael Gira says no pictures, you don’t take any pictures.

There was also a tense, but funny moment between songs when Gira asked for the house lights to be brought up repeatedly to no response. “Waiting… waiting…” he said earnestly, before giving up. Ultimately someone did manage to get the lights set to his liking, but not without causing a bit of drama. After both incidents, Gira was quick to summon back the music in full force. He swirled his arms through the air, taking his place as something between a conductor and a shaman. He gestured heavily towards his band mates at moments, cuing them in while simultaneously bringing them to the audience’s attention. Every movement he made added purpose and power to the details of the songs, crafting the specific, unmistakable dark magic that Swans embodies.

After several false endings, Swans wrapped up their long and satisfying set. They turned off their amps and lined up to face the cheering crowd. Gira introduced his band mates one by one (and himself as Johnny Rotten), and they took several deep bows, expressing their gratitude for their fans who have supported them throughout their 30 year existence. The next iteration of Swans is a mystery that will be a treat to explore.