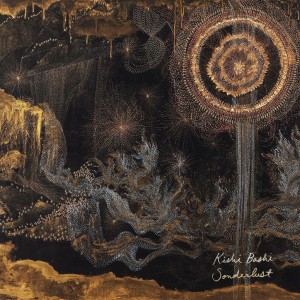 Sonderlust’s cover art is very telling of the album to come: the same delicacy and whimsy of Kishi Bashi’s previous albums, only darker; it’s different. Doing away with the bright colors on the cover of 2014’s Lighght, Kishi Bashi also tucks away his classic dreamy landscapes in exchange for some newer sounds.

Sonderlust begins with that familiar twinkling violin pizzicato, running through healthy amounts of reverb, like fireflies— a signature element of Kishi Bashi’s sound. But “m’lover” soon feels different from older Kishi Bashi tunes. His dulcet dream pop never expands into quite the lush, expansive atmosphere listeners have come to expect, instead staying more concise and sparse.

The album leans less on violin loops than on the previous two full lengths from Kishi Bashi (not entirely unabandonde, however, where its prevalence resonates throughout “Statues in a Gallery”), and picks up new fuzzy synth dance beats and disco ballad melodies. Perhaps most interesting is the tasteful incorporation of electronics; “Say Yeah” begins with a cascade or arcade sounds, transitioning into a subtle, consistent texture. “Statues in a Gallery” too plays with sample-based production over the familiar violin peeking out from the background. It’s something new from this chamber pop artist, but it never feels out of place.

These textural and atmospheric changes come from a tumultuous period in Kaoru Ishibashi’s relationship with his wife, evident in the lyrical motif of “my lover,” warranting a much more serious experience, understandably, compared to either 151a or Lighght. The melancholy of the funky 70s ballad harmonies lends itself well to Ishibashi’s earnest pleading, “All I want is one last chance as your lover.”  The album ends, though, on a more hopeful note. “Honeybody,” which begins with a soaring orchestral introduction, quickly becomes an undeniably enjoyable song, pairing the twinkling fireflies we love from Kishi Bashi with a fun, tropical vibe. The song concludes with the lush sentimentality he kept us waiting for throughout the album.

Sonderlust is the groups attempt to evade the shimmering dream pop album which perhaps was fits the expectation – the kind which evokes a feeling of loftiness and sends you into the stratosphere – but Kishi Bashi’s experimentations pay off with a cohesive release that celebrates love in a grounded way. His departure from full-on chamber pop deserves a listen, and no matter how much you wish he released another 151a, it’s hard not to dance along.