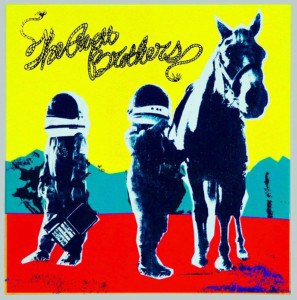 The Avett Brothers have done a lot of living since their last studio release in 2013, The Magpie and the Dandelion, and nothing attests to this more than the sounds of True Sadness. In an unprecedented leap forward, the band’s newest release stacks the instruments that started it all – banjo, guitar, and bass – on top of an expanded string section and electric guitars and even synths. Like the tide washing in, the new sounds gradually build then recede until the album breaks out completely with the song “Satan Pulls the Strings,” then flows back to their acoustic roots and finishes with a beautiful collage of instruments on “May It Last.”

It’s no secret that the band namesakes, Scott and Seth Avett, were hard at work on new material. Many of the songs surfaced in concert over two years ago just after Magpie, like “Fisher Road to Hollywood,” which took my breath away the first time I heard it in 2014. The song tells the story of the brothers’ rise to fame while reminding us of their roots with quiet guitar picking and harmonies. “Satan Pulls the Strings” has been played since 2014 as well with a long intro from the band’s growing string section – which includes two violins, a cello, and upright bass – that halts to allow the brothers to sing out the verses to the strong rhythm of the drums. Unlike the studio arrangement of “Fisher Road,” which sounds the same as when it was first played, the original arrangement of “Satan” is buried under a thick layer of atmospheric synth, voice distortion, and a somewhat antiquated bassline. I won’t lie – when I first heard the studio version of the song when it was released as a single a few weeks ago, I hated it. I listened to the first five seconds and immediately turned it off.

But this is where the magic of the album transformed the song for me. The songs are expertly ordered to create an easy transition from old to new. The album starts with “Ain’t No Man,” a song carried by heavy percussion and funky bass. Between the lyrics that beg to be sung and the rhythm that begs to be clapped, the song happily introduces us to the new sounds to come. The next songs remind us of what we love about their past albums but, without realizing it, the beats gradually turn electronic and the music is fleshed out with droning synth in the background. The uplifting piano and love-filled singing in “You Are Mine” makes the electronic sounds palatable for people like me who tend to stay away from computer-generated music. This, in turn, softens the shock of “Satan.” By the time we reach the title track and the following acoustic song, “I Wish I Was,” electronic music makes sense as a part of the folk rockers’ repertoire.

Don’t be fooled by the album’s title. This is not a sad album. Of course, like any album of theirs, there are somber parts and there are sad lyrics sung so happily that it takes a moment of reflection to realize what is being said – like the entirety of “Victims of Life” and “Divorce Separation Blues.” However, most of the songs are packed with pure love. I feel it rush through my body thinking of the spiritual lyrics to “Ain’t No Man” that boost my self-confidence every time I sing them out loud. I feel it overflowing from the collection of love letter one-liners in “You Are Mine” and my head is light by the time I reach the line “You are mine. The answer to the question ‘Who do I owe my everything?’” Don’t get me started on “I Wish I Was,” which almost made me cry when I first heard it. Yes, even “Divorce Separation Blues” is about love. Though the song is, obviously, about ending a marriage, there is no bad blood. Seth actually expresses concern for his ex-other-half. The last song extinguishes any doubt that the album is supposed to be all sad with a beautiful classic waltz played by their string section contrasted with minor chords played on the electric guitar that express doubt at the future but ultimately assure us that “There is a key and there is a light.” This song expresses the meaning of True Sadness: there are times of tragedy and sorrow, but it is necessary to experience something as beautiful as life.