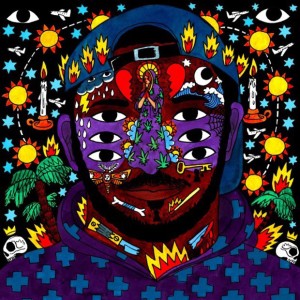 There has often been a struggle within electronic production, and in recent years the balance of that and artistry. An inevitable tug-of-war between masterful, musical craft versus technical production and precision impedes the way of the artist, notably in the solo acts of our continuing age of soundcloud, bandcamp, and more. The novelty of the loud and strange has worn off and a void of “what’s new” lingers over everyone’s ears; not quite there but always on the brink. On top of this, the statement behind an album never goes unnoticed and the desire, or necessity rather, for something great, expressive and emotive is either evident or takes the wayside with each and every release. Such a criteria makes for a critical audience but some artists like Kaytranada shine through vividly and the reception shows for it. 99.9% is the first letter as well as punctuation mark that is Kaytranada which weighs both his artist token as well as uncompromised stylistic production.

A preceding article over Louis Kevin Celestin’s recent life after soundcloud highlighted a rather complete timeline, noting peaks and troughs and the will of Kaytranada. Celestin’s difficulties – in school, the adversities of culture shock and identity, sexuality and relations of all varieties – are all contributory to the energy put forth for this album. The goal of achieving 100% is an uphill trek, made evident from his expansive releases, ranging from bootlegs of many forms to official releases, all in the spirit of self expressed dance and and hip-hop. Perhaps growing up as a Haitian-turned-Canadian is what brought out the influence for something different within his music, but the pieces for Kevin Celestin seemed to have all fallen into place since then. He thinks he’s only 99.9%, but that’s nearly there. At the top of the hill isn’t anything tangible, but a state of mind towards happiness and figuring out the life that is his own.

Parallels can be drawn from a couple artists in mind: Jamie xx and Disclosure. All three share the commonality of youth, bonafide stylization and impressive debuts because of this. Each artist’s’ use of featured vocalists, as if instruments on a track, is heavily exploited but uncompromising to each song respectively, only differing in lyrical content and execution. More so between Jamie xx and Kaytra, samples from far and wide are dug up and put forth as the epicenters of song ideas, easy to implement yet difficult to master, beautifully done on tracks such as “Lite Spots,” which is one of Kaytra’s best house beats to date. In terms of message togetherness, the album perhaps lacks any overarching meaning, but only in it’s lyrical ability. 99.9% isn’t about a story, however, but about the process and the musical styles, a subtle similarity to Disclosure’s title Settle. Heavy beats of consistent level sewn with dynamic interplay tie all the tracks together and stacked with featured guests, also similar on the the compared artist’s albums. The rest is pure Kaytra flavor.

In the aforementioned article, Celestin’s father was asked what he thought of the music: “Now I understand that he didn’t forget Haiti! You can feel it!” Without specific tracks noted, the evocation is true and resonant in the dance-laden and sample evident songs. Kaytranada, however, prevents stagnation with production of songs on his more hip-hop side. Songs such as “One Too Many feat. Phonte” and “You’re the One feat. Syd” spawn from the R&B popularity of today’s music, something Kaytra isn’t shy nor unaware of. Even more impressive is the pairing for vocalist/rapper to song, exhibited with each feature and especially on “Glowed Up feat. Anderson .Paak.” The list continues with ample coverage of styles with 90s garage vocalist Craig David, UK R&B up-and-comer Aluna Francis, electropop singer Yukimi Nagano of Little Dragon and even guest instrumentalists on a couple tracks as well. Rarely is this done well without any trade-offs and somehow Kaytranada flawlessly comes through.

The album can easily be put into two groups which add to the culmination that is Kaytranada: the dance tracks; the soul tracks. Not in attempt to discredit the track listing, because it is rightfully ordered and evenly distributed, but each group is an effort in and of itself which makes leaps and bounds of tactical and insightful composition from the artist. It’s a wonder Kaytranada hasn’t come out with anything sooner, but the obvious answer was that he just wasn’t there yet. It’s taken renown accolades, unique opportunities, inventive collaborations, and the balls to put out that one defining bootleg remix of Janet Jackson, to get Louis Kevin Celestin ready for his debut release. Now he’s at 99.9% in many aspects of his life even though his music gets a 100. Flipping the script on internet-borne music has never been so promising, and dance music gets another win this year from this album once superbly hybridized with hip-hop and a little funk. As coined by Louis Kevin himself, “Nobody beats the Kay.”