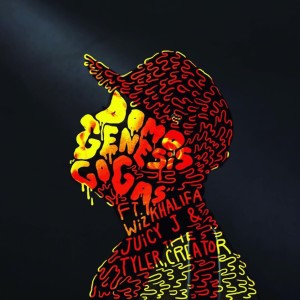 RT: One Below, My Own, Go (Gas), All Night
RiYL: Tyler the Creator, Oddisee, DOOM, Blu & Exile

Anyone who has paid attention to hip hop between the years 2009 and 2012 likely came across the collective Odd Future Wolf Gang Kill Them All. Whether you were a fanatical fan,dispassionate listener, or full-on hater, at some point it became appropriate to “grow out” of Odd Future. That is to say, the collective dissolved, and the early fans (and OF members for that matter) graduated high school and/or expanded their musical taste. The members of OF whose careers remained intact continued on to evolve their sounds in solo work. Tyler The Creator’s last album “Cherry Bomb” was a bombastic, playful, and exciting turn in contrast to his brooding beginning with Bastard. Earl Sweatshirt’s last album “I Dont Like Shit I Dont Go Outside” delves even deeper into darkness, Syd the Kyd went on to participate in The Internet, and Frank Ocean remains mysteriously absent from the music scene since his break-through album “Channel Orange”. Domo Genesis has always been a talented rapper for sheer technical value, but his bandmates cast a long shadow, and in the wake of their presence he never quite found the opportunity to shine, at least not like he deserved. Domo’s debut album Genesis is not only a moment to spotlight Domo Genesis’ maturation as an artist, but also a nostalgia trip for any OF fan to tune into.

Musically, Genesis sounds like the mellow Odd Future tracks that were always on the album to juxtapose the grimy-horrorcore-esque tracks, only with the jazz twist they always needed. The album takes the next step by focusing and expanding on those sounds, introducing new instruments to the mix and a wider range of vocal samples. There is a strong variety to the tracks, songs like “Questions” and “My Own” are driven by vocals, as are a lot of the tracks on this album; not to be confused with the iffy almost-singing that some hip-hop artists (Goldlink) use, but actual choruses by JMSN and Kendra Foster. Other songs are led by instruments, like the flute in “One Below” or the piano choir combination in “Wanderer”.

Of course the star of the show is Domo and his technical raps. Domo Gensis is a capable rapper, we’ve always known this, historically his rhymes have always been tight and creative, but with the raps on this new record he achieves something he has been lacking until now: content. Ok, yeah, so weed makes an appearance in every other song, but there’s depth to Domo’s lyrics that hasn’t been there before. “One Below” features a voice-over from his mother talking about her pride for him, then Domo goes into his struggle trying to shine in the shadow of Odd Future “And I wear my heart on my sleeves/ It’s been a while since I felt like I was part of the team/I feel like so apart, just trying to stay a part of this league”. A lot of the album is about following your dreams, and for the first time we get a sense of how badly Domo wants this, and how much he deserves it. “My Own” starts with a phone conversation with Domo and his father, calling from a federal prison, talking about the album and how Domo can’t wait until he gets out, then goes into a track about how Domo has paid his dues as an artist. In the album’s closing song “All Night” Domo sounds hopeful and maybe a little frustrated, and that carries a sense of fear in it and makes the rapper all the more relatable and human: “Still, I was never lead astray, I know I’ll see a better day / And every night I lay, I still had the same dream as the other day / Lord, listen to my Mother pray”. It almost makes you want to pay for the album, doesn’t it?

Don’t fret, the album isn’t pure emotion-rap, plenty of the songs on Genesis are fun nostalgia trips for Odd Future fans, reminiscent of the energy that made OFWGKTA so attractive in the first place. “Go (Gas)” features a trio of stoner rappers (Juicy J, Wiz Khalifa, Domo Genesis) and Tyler the Creator, out to brag about their women, their money, and the rivals they can destroy. “Dapper” sounds more Domo than OF, it’s a smooth, jazzy, feel good song about pretty women, strong drugs, and feels like something you could dance to.

Genesis has a lot of promise, it’s polished and well refined, but it still has room for growth. For someone as capable with his rhymes as Domo, his flows could have used more variety to keep the songs from blurring together. The same could be said about the features. JMSN has a stronger vocal range than he advertised in “My Own”, and Mac Miller’s hook in “Coming Back” was easily forgettable. All in all: solid album that will have you fiending for whatever Domo makes next.