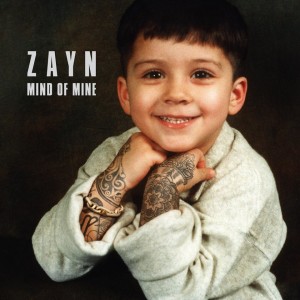 March 25, 2015 marks the day music died for millions of modern-day pop enthusiasts as the news spread that Zayn Malik had announced his departure from One Direction, the biggest pop group on the planet.  Whether Zayn released his debut album one year to the day after deserting his band as a means to rewrite history according to his terms or as one last final fuck-you to his past is unclear. However one thing is certain, Zayn is back and he is not going anywhere.

Lead single “PILLOWTALK”, has a throbbing chorus and layered crooning make for a delightfully inescapable pop hit. Malik’s R&B influences peer out just enough to announce to the world that this is a Zayn record, not a One Direction record, but contains enough pop-like sensibilities so that his massive carry-over fanbase isn’t alienated. It is a commendable feat that Malik was able to complete a full-length album (18 tracks in the deluxe version) clocking in at an hour, despite all the sex he seems to be constantly having, according to the lyrical content of Mind of Mine at least. Zayn is grown, he is singing about what he wants, in the style that he wants, and also drops the “f” bomb on 100 different occasions throughout the entirety of the record. “I’ve done this before, but not like this” declares Zayn in a hazy manner on the track “BeFoUr”. This is true, but he is now making music on his own terms. With this newfound freedom, the pressure is on for Zayn to become a fully-fledged artist with substantial things to say and an artistic vision in mind.

There are moments in which Zayn manages to live up to expectations such as in “INTERMISSION: fLoWeR” which sees Zayn sing in Urdu, a nod to his Pakistani heritage, as he is accompanied by a simple guitar and hushed-out vocals. “fOoL fOr YoU” and “iT’s YoU” crushes the doubts of anyone that was still under the notion that Zayn’s rise to stardom was due to his looks, as is custom with boybands, rather than to his talent. Zayn’s falsettos induce shivers down the spine, the vocal execution of these songs feels honest, like an all-access backstage pass to Zayn’s essence. “TiO” and “LIKE I WOULD” proves that he has the draw to get people moving at the club, or in the comfort of their bedroom, depending on who the listener is. Zayn’s smooth and effortless vocals are the highlight of the record, an hour-long auditory sensory overload for long-time fans as well as new-curious listeners.

Mind of Mine falters if only for the very fact that Zayn wears his influences on his sleeve for everyone to see. While the song themselves do not feel like the embodiment of watching a local-cover band stumble to play through an artist’s discography, it’s hard to make the distinction of were Zayn’s efforts work because we are familiar with a formula. Tracks like “tRuTh” and “BRIGHT” are reminiscent of Frank Ocean’s channel ORANGE, unsurprising because he enlisted James “Malay” Ho, who contributed extensively to Ocean’s 2012 album and is considered Ocean’s right-hand man. Meanwhile, “dRuNk” and “wRoNg” recall the same reverb-heavy vocals capped off by similar sleazy subject matters as fellow chart topper, The Weeknd. In setting his sights on becoming a “real” artist and escape the criticism of making vapid and manufactured pop, it seems as though Zayn has foregone more upbeat tracks and traded them in for an album riddled by slow-burners, a shame for those who wanted to see some real pop bangers, and a detriment to the “Fake&B” genre as a whole.

It’s difficult to not draw comparisons between Zayn and other boyband-members turned solo artists, especially since Malik rocks the same shaved hairdo and got his start in a television show aimed to showcase his talent just like his contemporary, Justin Timberlake. Such comparison however is unfair, Justin Timberlake and Zayn did not start out on equal ground. Timberlake was the stand-out member of N*SYNC and had name recognition thanks to both his role as the lead-member of N*SYNC and his high profile relationship and tabloid headlines. On the other hand, Zayn has shied away from the spotlight for the majority of his time with One Direction and lacked the mass name recognition for those outside of the One Direction machine. It’s a testament to his ability to attempt an album of slow-jams and R&B trips in the face of leaving one of the world’s biggest bands. So is Zayn the next Justin Timberlake? No, Zayn is the next Zayn; Only time will tell what lies ahead for him, but for now this record marks the emancipation of an artist eager to make the kind of music he would listen on his down-time.