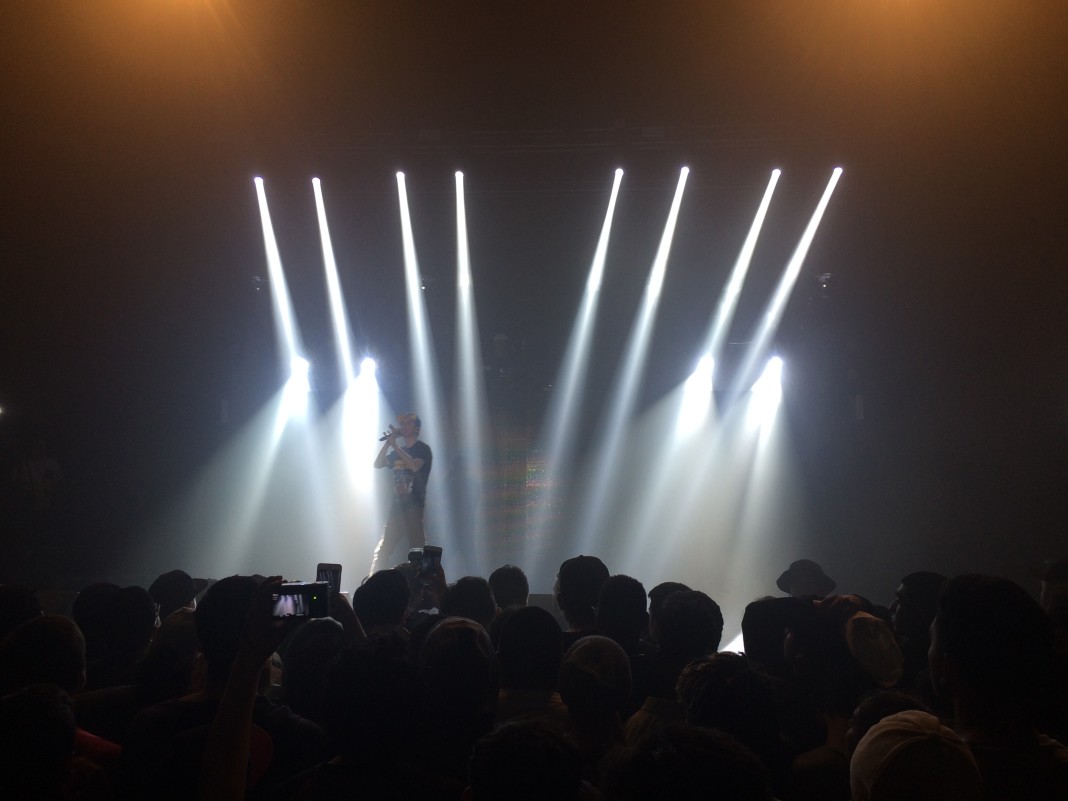 On The Incredible World Tour for his recently released studio album The Incredible True Story, Logic delivered a concert experience that close to (you guessed it) incredible. Joined by Dizzy Right, the two experienced rappers kept the crowd moving and bobbing along to their music. It was a night filled with fast flows, anime references, and audience conversations. Both artists strove to not only put on a musical experience, but also directly connect and humanize themselves with the crowd. The Bomb Factory, the venue for the sold-out show, faced lines that wrapped around three blocks before doors even opened. Many of the concertgoers sported previous Logic merch and jackets, a testament to the dedicated fan base for Logic. Inside, the crowd was dense and rowdy, singing along to the J. Cole, DMX, and other rappers that played as final sound and light checks occurred. The energy in the venue was high; many people talked about previous shows they had seen. Dizzy Wright, accompanied by DJ Hoppa, opened up the night with “Good Vibes”. Accompanied by a live band, Wright was an outstanding act, charging the audience with hype and turning the crowd into a mess of jumping, hand waving, and sweat. Throughout the show, he joked and interfaced with the audience. At one point during “World Peace”, Wright picked up a blunt from the crowd and smoked on stage with his crew. Soon after, he flung himself into the crowd while furiously rapping “Floyd Money Mayweather”. Finally ending with “Everywhere I Go”, Wright started and ended on a high note, leaving everyone ready for Logic while leaving his own mark on the crowd. DJ Rhetorik, Logic’s hypeman and DJ, then came on the stage to play a DJ set consisting of top 40 artists with some 90’s throwbacks as a warmup. As the set ended the lights dimmed, and massive LED screens came alive with a countdown before opening up to images of space travel as the pounding drums and broad vocals and strings of “Contact” played. The brief conversation at the end of the song was replaced with a short bit about how Dallas was the “baddest city”, a nice personal touch that made the crowd go crazy. With the crowd vocalizing along, Logic, in a red jumpsuit inspired by the cover of his latest album, then sprang on to the stage and launched straight into “Fade Away”. He then followed it up with “Like Woah” and “Under Pressure”. At this point, Logic killed the sound and began addressing his audience, mentioning how they were a family and talking about his life experiences. He would continue to do this between each song, playing “Young Jesus” and “5 AM”. During his songs, Logic would briefly cut the sound, going acapella in a frenzy of words and lyrics. While his interaction and playful jokes with the audience were well meaning, it was hard to pick and start back up with a crowd who had been eagerly waiting to hear his music all night. There was some discontent as he continued to drag on and ask people what their names were. After a brief intermission where DJ Rhetorik played some old school Logic classics such as “All I Do”, Logic came out swinging with “I Am The Greatest”.  He then followed it up by performing “Paradise” over the original Outkast beat it was inspired by, which was a refreshing take. In between sets, he would continue to joke with the crowd, even playing with a Rubik’s rube. The screen behind his sets played scenes from popular animes and video games, such as Akira, Cowboy Bebop, and Metal Gear Solid. Logic wrapped up the night by playing the slow jam “Never Been”, with it’s sampled vocals and simple piano. After yells of an encore, Logic came out and performed high-energy pieces “City of Stars” and “Gang Related”, ending the night on a high note.

From an individual performance standpoint, Logic was near flawless. Each song was well-performed and composed, with driving bass rhythms and synths. His acapella renditions of some songs were jaw-dropping, with him spitting lyrics like lightning. However, his show somewhat lagged at times, especially when Logic protracted his conversations and jokes. Nitpicking aside, Logic showed off his strength as a lyricist and artist, and his concert is just another part of the incredible true story for the fans that attended.