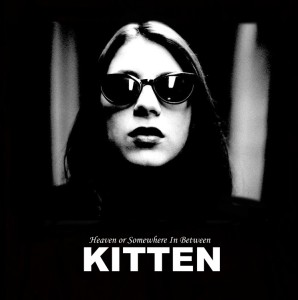 ‘Heaven or Somewhere in Between’ is Kitten’s latest release. As a band known for having an array of thematically different EPs, ‘HoSiB’ sees the band experimenting upon a sound set forth on their self-titled album. Taking hints from previous songs such as “Cathedral”, this release features an incredibly 80s-influenced track-list that intertwines a tale of love with religious symbolism.

“Fall On Me”, opening track and newest single, is the best song out of the bunch. On this one, a catchy melody unites with dreamy guitars and huge choruses that beg to be heard over and over again. The rest of the songs follow suit in instrumentation, yet fall short in overall effect.“Church” is noteworthy in that it showcases a new focus on delivering more powerful and higher-pitched vocals. This is seen throughout the EP and is a step away from Kitten’s earlier works.

Overall, ‘HoSiB’ provides easy, relaxed listening, and that’s about all that there is to it. There’s a certain lack of engagement from the EP, and any that “Fall On Me” gives off is lost by the fifth song. Maybe it’s a lack of identity. As we have seen so far, each EP released by Kitten has had a different focus, and even her debut came as a bit of surprise in terms of its direction. Yet, at the tender age of 20, singer Chloe Chaidez has more than enough time to figure herself out, and if releasing EPs is her way of doing it, then let them be heard.