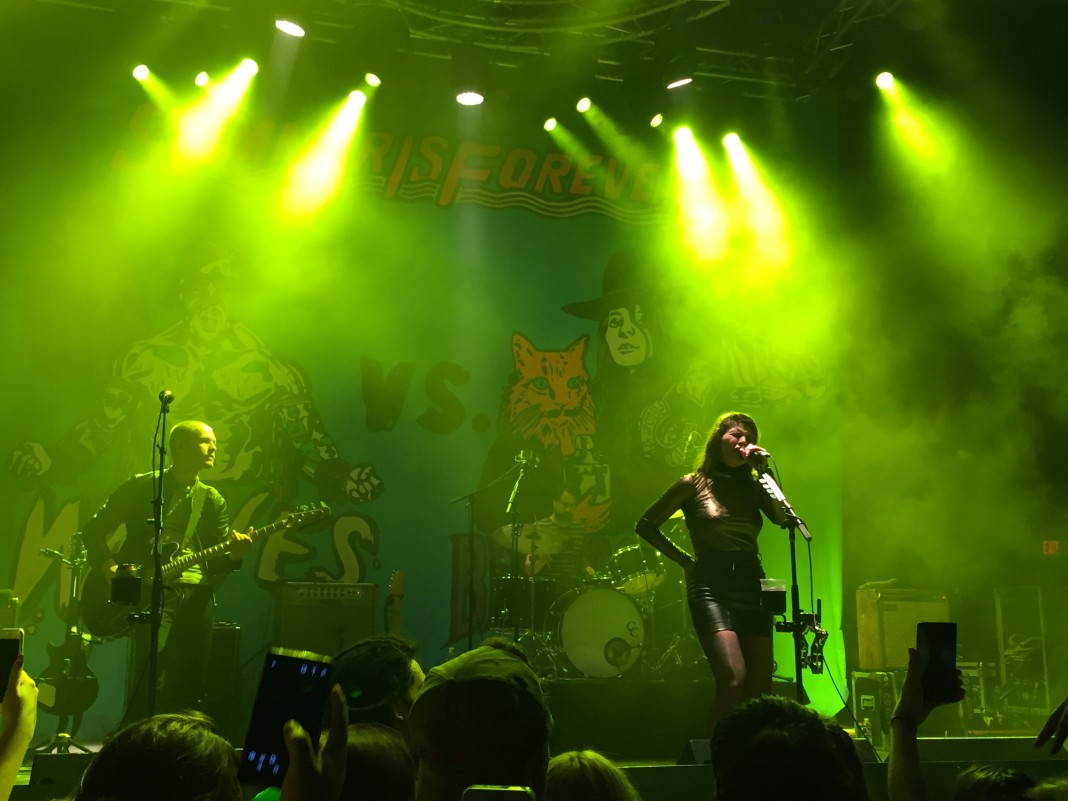 Everyone at Gas Monkey LIVE! on Friday night was either under the influence or sporting a fashionable outfit with a septum ring to match. Cherry Glazerr, WAVVES, and Best Coast came together to give their fans exactly what they knew we wanted – nostalgia of a pure angsty summer, and all three delivered. Cherry Glazerr made it clear when they arrived on stage that they “Wouldn’t take any bullshit” and after playing their single “Had Ten Dollaz”, Creevey demanded moshing and the crowd complied willingly. The noise-pop band made the most introverted individual want to go push around the bearded dudes moshing in the center. After playing some of the crowd’s favorites: “Trick or Treat Dancefloor”, “All My Friends”, and of course, “Grilled Cheese”, everyone in the room was seduced by her pin-pricked guitar, partial singing, and Creevey’s accurate depiction of youth experience, which makes her music so relatable. Sean Redman, the bassist of Cherry Glazerr, described Creevy as “the anti-Disney Channel poster child” and although two-thirds of the band is under drinking age, Cherry Glazer struts with uttermost confidence, especially when preforming in front of their lovely Gas Monkey audience. Cherry Glazerr hit the audience with the summer feel from the very beginning with their songs oozing with pop-culture; however, as the crowd’s excitement for WAVVES who was up next, the security of Gas Monkey tripled in size. At then end of their set, the audience saw Cherry Glazerr pleasing the crowd with their last song, along with the silhouettes of giant security men that looked into the crowd, which off-set the care-free feeling that Cherry Glazerr put forth for Summer is Forever II.

WAVVES did more than just simply please the audience, as everyone’s first glance was Stephen Pope’s voluptuous hair, and for some people, that’s really all you need to get you antsy to mosh. The band played a great variety of songs to please the audience, ranging from the albums King of the Beach (2010) to V (2015). After warming up the crowd with their hit songs: “Afraid of Heights” and “When Will You Come?”, WAVVES distributed blow-up alien dolls to the hungry crowd while playing “Heavy Metal Detox” emphasizing the lines “We’re not alone, I believe we aren’t alone”. At this time, there were not just blow up aliens above everyone’s heads, which made security become more belligerent and fed up with the crowd’s aggressiveness. But, like most would expect, Nathan Williams did not put up with this. Just after starting the crowd favorite, “Green Eyes” off of King of the Beach, Williams stops in verse one to tell the Big Brother like security guard to move out of the way, “I’ll wait until you move, I’m sure those people want to watch”. Williams had the audience moving, punching, and yelling, despite the overflow of security. Either the audience was too tired from throwing around alien dolls or Best Coast’s Bethany Costentino just didn’t tell the audience to mosh early enough, but it felt as if WAVVES should have been the headliner for this show. Best Coast played an overwhelming amount of tracks from their self-titled album, opening with “When I’m With You” and “Crazy for You” and when the opening songs didn’t get the audience moving as much as she wanted the crowd to, anyone could tell that Costentino wasn’t happy with the results. Her distinct taste of ‘90s alternative-rock came through, and the crowd was pleased. There wasn’t too much of the rowdy surf-pop feel as one might expect, but everyone was singing along to her newest songs “California Nights” and “In My Eyes”. During the middle of the set, Costentino said “I know they told you you can’t move, but fuck it do it anyway”, her hit track “Boyfriend” began after, and the audience was incredibly stiff, only a few moving around to dance with their partners. Despite the crowd’s lack of energy during Best Coast’s set, the line-up delivered incredible amounts of angst, fashionable moodiness, and left everyone wanting a Texas’ Summer.