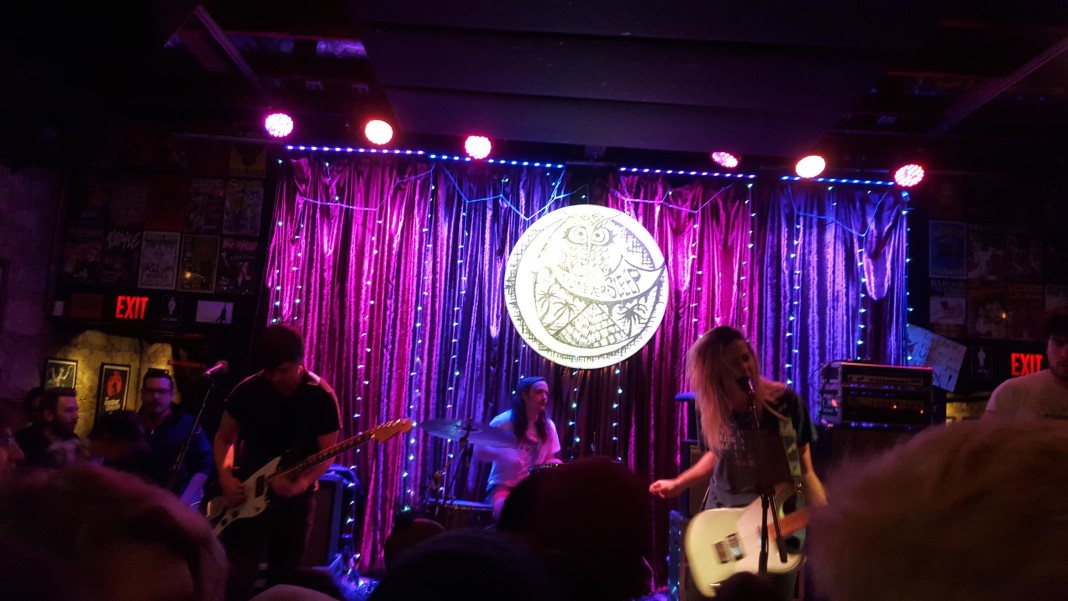 Share on Facebook
Tweet on Twitter
It’s crazy how one night can be so diverse with concerts: hard-hitters Lamb of God/Anthrax/Deafheaven/Power Trip all at Bomb Factory and the pioneering noise pop band Yo La Tengo at Granada Theater were all one night. Not too far from Bomb Factory, however, were newcomers Bully at the intimate Three Links. Opening act Malandros which comprised of Trevor Scott on vocals and guitars, Dillon Randolph on bass and vocals, Stijn Dobbelaere with drums, and Chad Herring also working guitars. It was all easy breezing at first, but picked up later as brisk surf pop with short and sweet tunes. Malandros pushed for some nice pop bops, and rightfully did so with the crowd readily feeding off of the warm vibes during an extremely chilly night. Malandros set the tone for what was to come: energy and loads of it as Diet Cig was more than eager to go next. According to Diet Cig’s bandcamp, their biography states: “two homies just making tunes and eggs on the regs”. Just their biography alone gives off the vibe that they’re carefree and fun, and that was exactly what they were. Alex Luciano, vocalist and guitarist, darted to the stage with a glee of hyperactive energy. It was as if she was going to do cartwheels any moment now, but Luciano did more than that: she and her companion brought simple yet charismatic melodies to every single corner of the stage. Noah Bowman, the drummer, shyly Snapchatted the initial reactions of them just starting their set. Luciano maneuvered back and forth with an infectiously joyous attitude that was perfect as the centerpiece of the already stacked bill. Luciano spoke of donuts and girl power before transitioning to crying out of teen angst with a complete do-whatever-you-to-do-as-long-as-it-makes-you-feel-happy attitude, which was particularly refreshing. However, all good things must come to an end but Luciano wanted to end things with a bang. Luciano climbed on top of Bowman’s drum kit and stood on it and effortlessly did what she does best. She felt like the queen of the world, and the crowd saluted her wholehearted performance with an uproar of applause. Finally, there was lead singer Alicia Bognanno’s howls sounding as distinct and fierce as their intense debut Feels Like. The whole gang composed of drummer Stewart Copeland, guitarist Clayton Parker and bassist Reece Lazarus right off the bat charged, and without a second to waste a mosh pit ensued that lasted the entire set. The mosh pit did indeed maintain their rowdy ambiance, and Bognanno even noted this halfway through the set proclaiming that the Dallas crowd was bouncing off the walls compared to their previously stiff shows. Whether or not this comment added more fuel to the fire, during the second to last second song, the riotous bunch in the mosh pit escalated to the point where a girl in the front was being completely slammed. Bognanno took note by stopping mid-song and alerting the moshers that she wants all to have a good time, but to also know that they are safe in the small confinements of Three Links. Even Diet Cig tweeted about it! In the end, Bully fell in love with Dallas and cited that their expectations far exceeded than what they originally thought. It was a first time for them in Three Links, and it won’t be their last considering how inviting the crowd was. And why was this the case? It’s those small moments of Bully feeling synchronized with the crowd by Bognanno’s shrieking, yelling and whimpering that sent chills down your spine. It could be the flickers of vulnerability that many people can relate to with Bully’s grand songwriting. The crowd swiftly shouting in unison alongside Bognanno’s with “I remember getting too fucked up / And I remember throwing up in your car” from the exquisite “I Remember”, or “Trying to hide from my mind, I am/ Trying all the time, I am” from lead single “Trying” displayed raw emotions out of everyone. But overall, it was that Bully struck the right balance of chaotic fun and charm that Dallas matched in every single way possible.