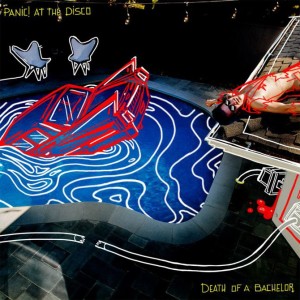 RT: “Victorious”, “Death of A Bachelor”, “Don’t Threaten Me with A Good Time”, “Emperor’s New Clothes”
RiYL: Fall Out Boy, Twenty One Pilots, Walk the Moon

If there was one word to describe the Las Vegas based band Panic! At The Disco’s newly released album Death of A Bachelor, it would be ‘confident’. Spanning a range of 10+ years, the band had not only an ever changing sound, but an ever changing lineup as well. Panic! At The Disco started in 2004 and released their first album A Fever You Can’t Sweat Out, which contains certainly the most popular song off the whole band’s discography “I Write Sins Not Tragedies”, explosively setting the band’s fan base as the notorious emo crowd, and fairly reflecting the band’s music at the time, a mix of contemporary emo, post punk, and pop rock plus the overwhelming musical and lyrical themes of early 1900s cabaret scenes, drinking, prostitution, and mental health. Fast forward to 2016, and Death of A Bachelor sees the removal of Dallon Weekes as official bassist (and back as touring member) and marks Brendon Urie’s power as a solo artist. Filled with sexy melodies, catchy hooks, powerful vocals that really capture Urie’s amazing vocal range, and unique use of horns and electric guitar, Death of A Bachelor marks Panic! At The Disco’s new era.

Death of A Bachelor is marked with confidence; the album starts off with “Victorious”, one of the most powerful tracks of the project, and does not diminish in the level of hype until the ending track, “Impossible Year” (the only slow song on the album). Every track is marked with Urie’s amazing use of heavy drums, sexy electric guitar licks, and his main musical influences of the album: Queen and Frank Sinatra. In nearly every track, Urie starts with interesting mini intros that lead to pumped, sexually charged verses, and it’s a winning formula. A prime example is “Golden Days”, as Brendon sings “I found a pile of Polaroids/ in the crates of a record shop/ they were sexy, sexy looking back/ from a night that time forgot”.

The tracks in the albums have all catchy choruses, like in “The Good, the Bad, and the Dirty”, usually with Urie’s harmonious gospel-like choir that get the audience to not only want to join Urie, “Stand up [and] sing hallelujah (hallelujah!)” – as the track “Hallelujah” exemplifies – but also feel a part of and one with Death of A Bachelor. Urie plays all the instruments except the horns in the album, and fills the album with steady beats and 5 second drum solos in between transitions. Urie takes from Queen’s Freddie Mercury as the album becomes dictated by the singer’s amazing vocal range – hitting the upper octaves in almost all the choruses as well as all the impressive and numerous vocal runs. The nadir of the album is the chorus of “Golden Days”: the drum beat is really fun, but the melody seems to be a sort of cheap sell out in attempts to fill in the song, especially when compared to the very racy and playful verse. The verse in “House of Memories” loses sex appeal as Urie seems to take a 1940’s slow, broadway influence that poorly melds into and takes away from the super pumped and firey chorus.

Lyrically, the album takes the audience to a 33 minute party with a 3 minute cool down at the end. More than half the album is about Urie’s life as a champion, a party animal, a power addict, a fighter, and a lover. “Don’t Threaten Me With A Good Time” exemplifies this trend perfectly with not only run ins of betted cross dressing, but a chorus of “all right/ it’s a hell of a feeling though” and mentions of his holy trinity “champagne, cocaine, gasoline” as well as the obvious “if you go out you might pass out in a drain pipe”. The other half is still equally hyped, but is more about Urie’s confessions as a sinner, as a married man, as an imperfection, as well as reminiscence of the old days. Not as poetic as Pretty. Odd., the album is still filled with witty lyrics and allusions to the Beach Boys (in “Crazy= Genius”), astrology (“L.A. Devotee”), and other cultural references.

Death of A Bachelor is not only one of the best albums lyrically and musically of Panic! At The Disco, but arguably poised to be one of the best of this year. The album is confident in sound, composed in theme, and most importantly, skillful in its musicality. Brendon Urie has outdone himself, and as a solo artist, Brendon Urie has breathed new life into Panic! At The Disco through this new album, and it certainly will keep on living with its impressive panache.