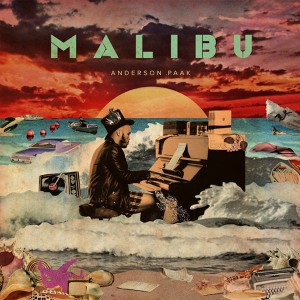 It’s both easy and comforting to draw lines of similarity from the artists of today to the musicians of yesteryear. Many compare Miguel to Marvin Gaye, both relaying messages about peace, love, and sexuality with powerful inflection, or Frank Ocean to Stevie Wonder, with their collected, spiritual aura, and general sound/delivery. Anderson .Paak, the 29 year old R&B artist who holds California in his heart and wears his heart on his sleeve, defies this sort of easy categorization. His debut album, Malibu, comes on the heels of his collaborations with The Game and Dr. Dre on their latest albums, the audacious projects The Documentary 2/2.5 and Compton, respectively. Previous collaborations with hip-hop producer Knxwledge, under the moniker NxWorries, as well as a handful of EP’s, led Paak to work with those heavyweights, featuring and working on a staggering 6 songs on Dre’s long overdue comeback album. Though not his debut album (2014’s under the radar Venice would be saddled with that designation), Malibu is essentially another album to be placed in the long line of confident and idiosyncratic debut albums that artists who tend to stick around come out of the gate with.

While most R&B albums these days tend to look for pared down, minimal, slow-burning sounds, especially those by white artists, Anderson Paak is in full embrace of the funk, soul, and R&B on display here. One moment you’ll be hearing him rap-sing over an ear-worm and off-kilter hip-hop beat that wouldn’t be out of place as a Kendrick Lamar track, and the next moment Schoolboy Q is rapping over a full on classic funk track. From the opening ballad “The Bird”, whose lyrics recall the poetic stylings of artists like Nina Simone and Aretha Franklin, to album closer “The Dreamer (feat. Talib Kweli & The Timan Family Choir)”, no two songs sound the same. Production by the likes of 9th Wonder, Kaytranada, Madlib, and a few TDE in-housers, all perfectly complement the “L.A. R&B artist” aesthetic that Paak embodies so effortlessly.

That he draws comparisons to the kind of intelligent, creative, out of the box thinkers like Kendrick Lamar and Flying Lotus isn’t an accident. With that being said, there is a glaring Achilles heel to Malibu, and that is over-indulgence. While none of the songs here run full steam off of a cliff, the production and Paak’s singing can occasionally feel like he’s trying to cram every single idea he has in one song. It’s no wonder that the same kind of detractors are lobbed at the aforementioned Lamar and Flying Lotus, but Paak has less of a deft hand at hiding it. Too many instruments all crashing over each other, vocal harmonies layered to the point of ridiculousness. It’s rarely overwhelming, but it would benefit Paak to spread things out a bit. That being said, Malibu at it’s highs is a triumph. From the infectious grooves and boasting of “Come Down” to the 90’s boom-bap of “Without You (feat. Rapsody), Anderson Paak has a special voice for describing his environment and bringing a fresh perspective to the struggles of money, family and love. Like young artists before him, he doesn’t give excuses or try to frame anything to emotionally manipulate the listener. These are the way things are, and how he sees them, and they’re all part of the narrative of this inspirational album.