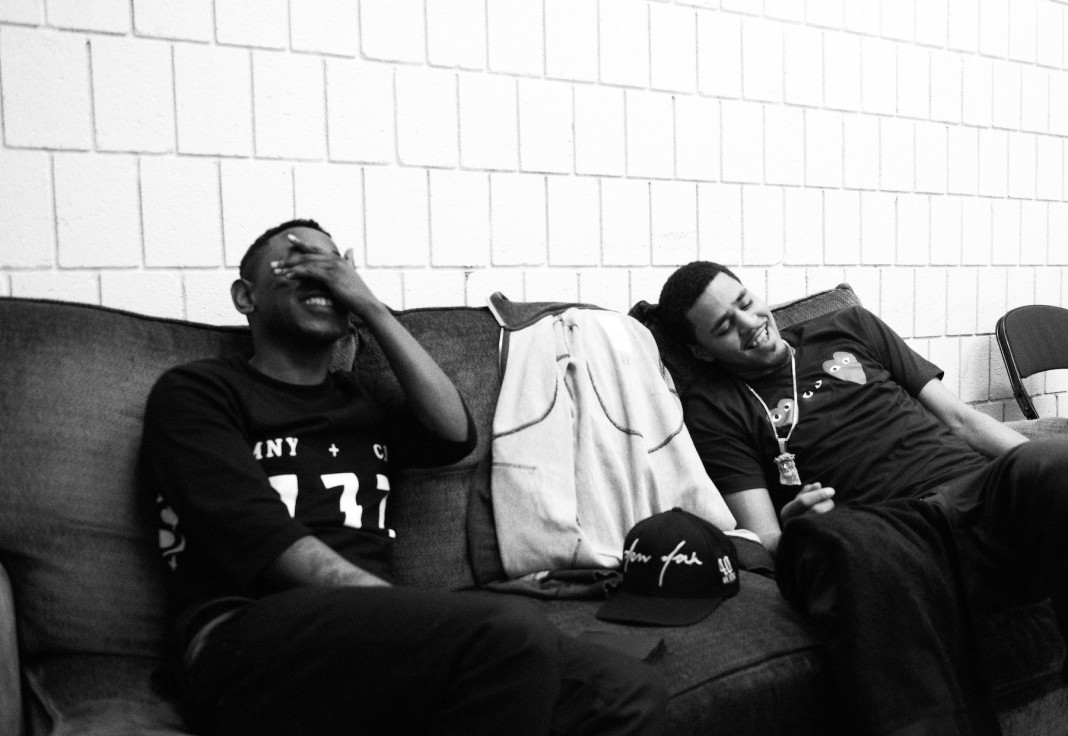 Welcome to The Weekly Rap Up for the second half of November. A lot happened in the first half of the month, but plenty of things have happened in the second half of the month to set 2016 into motion. Big projects from hip-hop heavyweights, moves from up-and-comers, and collaborations we never saw coming. We’re also gearing up for the new year, and every publication is posting their end of the year lists, many of them including albums like Vince Staples’ debut album Summertime ’06 or Kendrick’s masterful To Pimp A Butterfly. What do you think the best hip-hop album of 2015 is? What about your favorite song? Let us know in the comments, and without further ado, let’s get into it.

First and foremost, we’ve got to cover the surprise collaboration from Kendrick Lamar and J Cole. The two dropped remixes of eachother’s songs on Black Friday, and appropriately titled the collaboration “Black Friday”. Rapping over popular songs from eachother’s latest albums, Cole showed his songcraft and rapping skills over Kendrick’s popular resistance anthem “Alright” from To Pimp A Butterfly, and Kendrick proceeded to absolutely body J Cole’s “Firing Squad” beat from last years 2014 Forest Hills Drive. Even more exciting than this is news that the long rumored collaborative mixtape from the two rappers might be coming sooner than expected. A deleted Instagram post from Kendrick’s sister claimed the mixtape would be releasing February 16th of next year, and was taken down soon after for obvious reasons. Whether or not Kendrick and Cole will finally release the project in February is yet to be seen, but what we do have is two blistering verses from two of raps young greats. Check out the songs below.

Pusha T’s upcoming second album, Darkest Before Dawn (scheduled for release on December 18th), isn’t just an empty title for the rapper to use as a placeholder. In fact, in an interview with Rolling Stone, the new president of G.O.O.D. Music stated that “In regards to the sound, I feel like My Name Is My Name is a bit more lighthearted than what I just created. I sat with Timbaland, I sat with Kanye, I sat with Sean Combs, Boi-1da, Nashiem Myrick… and got from each of them the darkest part of their souls on these beats, and it marries everything I’m doing right now lyrically.” He also spoke a bit about a possible sequel to Cruel Summer, G.O.O.D. Music’s 2012 label collaboration album that spawned multiple hit singles like “Clique” and “Mercy”, saying that it’s “definitely on my mood board. I’m totally on that and I’m going to make that happen. That is a goal of mine and I reach my goals.” Read the full interview here and check out the video for the first single off the album, the Timbaland produced “Untouchable”, below.

Lil Wayne recently released his long awaited follow-up to one of his best and most beloved mixtapes No Ceilings. However, No Ceilings 2 hasn’t been getting that much love, and many are saying it’s the final proof that Wayne has fallen off. The mixtape features Wayne rapping over some of 2015’s most popular songs, including “Hotline Bling“, “Don’t“, “Milly Rock“, and “The Hills“, just to name a few. Check out one of the mixtapes highlights, Wayne’s remix of Drake and Future’s “Where Ya At” from DS2 below, and let us know what you think of No Ceilings 2 and Wayne’s career in the comments.

After the release of his first mixtape, MTV1987, Kevin Abstract established himself as one of hip-hop’s brightest young voices with songs like “Drugs” and “Save“. Now, gearing up for the release of his second project, They Shoot Horses, the rapper, originally from Corpus Christi (a Texas native!) has released his newest single, “Echo”. It’s his best song yet, and proves he’s willing to take artistic risks many others aren’t. Shoegazey guitars, a driving beat, and an incredible bridge transition, Echo is one of the finest songs of the year, and all this from an up-and-comer. Kevin Abstract not only continues his tradition of great music, but also of great music videos, and this is his best yet in both department. Check it out below, and be on the lookout for They Shoot Horses in 2016.

Kid Cudi is gearing up the release of his newest project, Speedin’ Bullet 2 Heaven, but after performing only 1 show on his promo tour, Cudi took to twitter to cancel the rest of his tour dates and issue an apology to his fans. As an apology, Cudi released the album’s eponymous song as a single, and if the album sounds anything like the song, then the long-awaited artistic return of Kid Cudi might be upon us with this newest album. Listen to “Speedin’ Bullet 2 Heaven” below and lookout for the double album of the same name on December 4th.

Kanye West collaborator and friend, and fashion designer Virgil Abloh was DJing at XOYO in London earlier this month, and he took the opportunity to play some unreleased music from Kanye, which could possibly be appearing on SWISH. “Fade”, which features vocals from Post Malone and Ty Dolla $ign, and samples a classic Chicago house track by Mr. Fingers, was first played on the runway at Kanye’s YEEZY SEASON 2 showcase, but the full version had yet to be heard, and even though it’s not CDQ, we’ll take what we can get. If the future of Kanye’s music is Detroit Techno and Chicago House, or just electronic music in general, then the future is bright. Check out the video of the song being played below.

Atlanta’s very own Makonnen has been relatively quiet for a star who had hits like “Tuesday” and “I Don’t Sell Molly No More”, but the release of his ILOVEMAKONNEN 2 EP should keep hungry fans satiated for a while. Check out the lead single “Second Chance” produced by DJ Mustard below, and peep the whole mixtape, which features the likes of Santigold and the aforementioned DJ Mustard, here.

Missy is gearing up for a comeback, and after her releasing her first song in a really long time earlier this month (WTF, a collaboration with Pharrell), the rapper is doubling down and featuring on R&B singer Monica’s newest single, Code Red, off her upcoming album of the same name. Check out the song below.

Travis Scott debuted some new music at the Fillmore in Maryland, and it sounds like there’s some more bangers on the way. The second song he performed is rumored to be called “Bake Sale” and features Wiz Khalifa, and while the 1st song doesn’t have a title, it sounds like some of the most insane and well-done work Scott has debuted yet. Check out the performance below and let us know what you think.

Jay Rock’s second album 90059 was a great development for the TDE leader, and one of the fan favorites from the album “Easy Bake” just received an official remix featuring a great verse from Kendrick Lamar, who’s continually establishing himself as a future GOAT with every new verse, and SZA, TDE’s resident R&B goddess. Check it out below.

We don’t hear much from the elusive MF DOOM, but this video released on Hypetrak’s youtube channel might mean something. You never really know with the guy.

Erykah Badu’s newest project, a Hotline Bling inspired mixtape titled But You Caint Use My Phone, was recently released, and features a rare guest verse from ex-husband and elusive rapper André 3000, one half of legendary Atlanta duo Outkast. Badu and Dre have a son named Seven together, and the rapper shows up here for a characteristically fantastic guest verse. We might get them incredibly rarely, but we savor them so much more. The track is a sort of remake of The Isley Brother’s 1974 classic “Hello It’s Me”, and is the last song on the tape, which toy can download exclusively on iTunes.

The Drake & Adele “Hello” remix rumors are heating up, and when the rapper was asked about it, Drake stated “I’d do anything with Adele. I’d literally go to Adele’s house right now and do laundry for her.” When previously asked about a possible collab, Adele shared Drake’s sentiments, commenting “I really want to do an official remix. I love Drake. I love Drake so much. I even got the coat that’s in the video, I got it delivered the other day, I ordered it. The red one.” If this happened, it might the biggest and most inescapable song in the world, so as much as we’d love to see what a “Hotline Bling” or “Hello” remix would song like, we hope it won’t be anything that we’d get tired of. You’ll be sure to hear more Adele though, as she just broke all kinds of sales records with her newest album 25.

Rick Ross is gearing up for the release of his newest album, Black Market, on December 4th, and as we covered in the last Weekly Rap Up, he’s been releasing songs with some of his most blistering and soul-baring verses to date. Ross’ latest single, “Color Money”, the Miami rapper once again addresses the beef between Drake and his MMG signee Meek Mill. Ross hasn’t exactly been in Meek’s corner fully, as shown on this year’s “Foreclosures”, saying “and I never took an L back when Meek fell”, and his lines on “Color Money” don’t really take a clear side on the matter either. Check out the track here.

And finally, we’ll do our section on up-and-comers who need more shine. Kevin Abstract was previously mentioned, but there are plenty of other newcomers who deserve your attention as well. Mysterious London artist NAIKA combines dancehall, hip-hop, and industrial for some of the most interesting sounds coming out of the city in a while. If you liked Yeezus or any of Arca’s work, check out his song below. P Reign isn’t exactly a newcomer, but he’s really not that famous, and his new collab with Young Thug and T.I. is actually pretty decent. The OVO signee seems to be improving as well. Jazz Cartier, another Toronto native, had his new song “I Know” debuted on OVO Sound Radio, and he’s probably the most promising young artist from Toronto who hasn’t blown up yet. His newest mixtape, Marauding In Paradise, is also excellent. 20 year old rapper/producer Frank Leone is all over the place, and that’s a good thing. His latest project EnterWILD was just a taste of his eccentricity, and his latest song “Supertramp USA” is just further proof of it. Boris the Lucid released an abrasive, almost metal like track in the form of THE THREAT, which you can check out below. And finally, Von Alexander released his V O N EP earlier this month, and it’s one of the most promising projects of the year. Listen to “D R E A M S (Hey, Hey)” below.


Hopefully that covers everything from the latter half of November. If there’s anything we missed, be sure to let us know in the comments, and we’ll see you in 2 weeks. Peace.