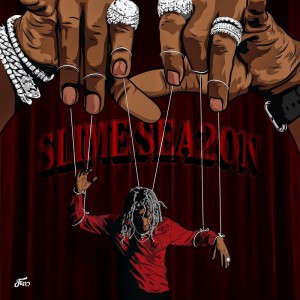 Young Thug, the always flamboyant, slightly crazy, and very vocally eccentric rapper has finally released his highly anticipated mixtape Slime Season 2, the follow-up to September’s original Slime Season mixtape. Thug asked fans to choose between Slime Season 2 or his mixtape length collaboration with Migos, Migos Thuggin, to release, and on Halloween night the world spoke and Thugger released Slime Season 2 for the denizens of the night to turn up to. The original Slime Season brought us some great tracks like “Rarri,” and “Best Friend” which saw Young Thug sexually pleasing himself in the music video. These songs expanded upon Thug’s repertoire and proved that his erratic vocal stylings and playful melody’s haven’t been exhausted yet. Slime Season 2 is Thug’s second mixtape in only 2 months, and after a recent beef with Metro Boomin and Future about rappers with too prolific of an output, it seems like history might err on the side of Metro Boomin. That’s not to say that Slime Season 2 lacks excellent tracks, but sometimes a succinct single like “Stoner” or “The Blanguage” can be far more satisfying than an entire mixtape’s worth of tracks.

Yet, as far as a Young Thug goes, this is a pretty consistent album. The mixtape features many familiar faces like Birdman, Thug’s own Vito Corleone to his Michael, and his BFFL Rich Homie Quan (R.I.P. Rich Gang), along with newcomers to his feature roster like Yak Gotti, Shad the God, and Trouble. Right off the bat the mixtape is daunting, at an overwhelming 22 tracks. It is a hefty compilation of music, and some of the tracks could have been left off the tape. Songs like “Phoenix” and “Up” sound like either regular fare, or even uninspired, a song rarely used for Young Thug songs. Sonically there could have been a bit more diversity as well, with traditional trap beats galore. London on da Track and Metro Boomin make some of the better productions on the tape, but they don’t stop it from dragging at certain points. Maybe a 10 track tape with more diversity would have been better suited for such a quick release.

Some of the standout tracks on the album include “Don’t Know (feat. Shad Da God)” and “Twerk It”, an unabashedly amazing club track about exactly what you think. “Raw (Might Just)” actually sees Thug rapping on his most interesting production in a while, as cloud rap sounds envelop his vocals, and his elongated notes almost sound like indie-rock. With lots of braggadocios lyrics about money, drugs, and women these songs will definitely be getting lots of spins in the club, but Young Thug also gives us a little bit of his softer side with trap love songs like “Love Me” & “Hey, I”. Overall, Slime Season 2 was a bit of an unfinished project, but hopefully Migos Thuggin or Metro Thuggin will reinvigorate Young Thug in the future, and let us see one of hip-hop’s most prolific and exciting acts in a full return to form.