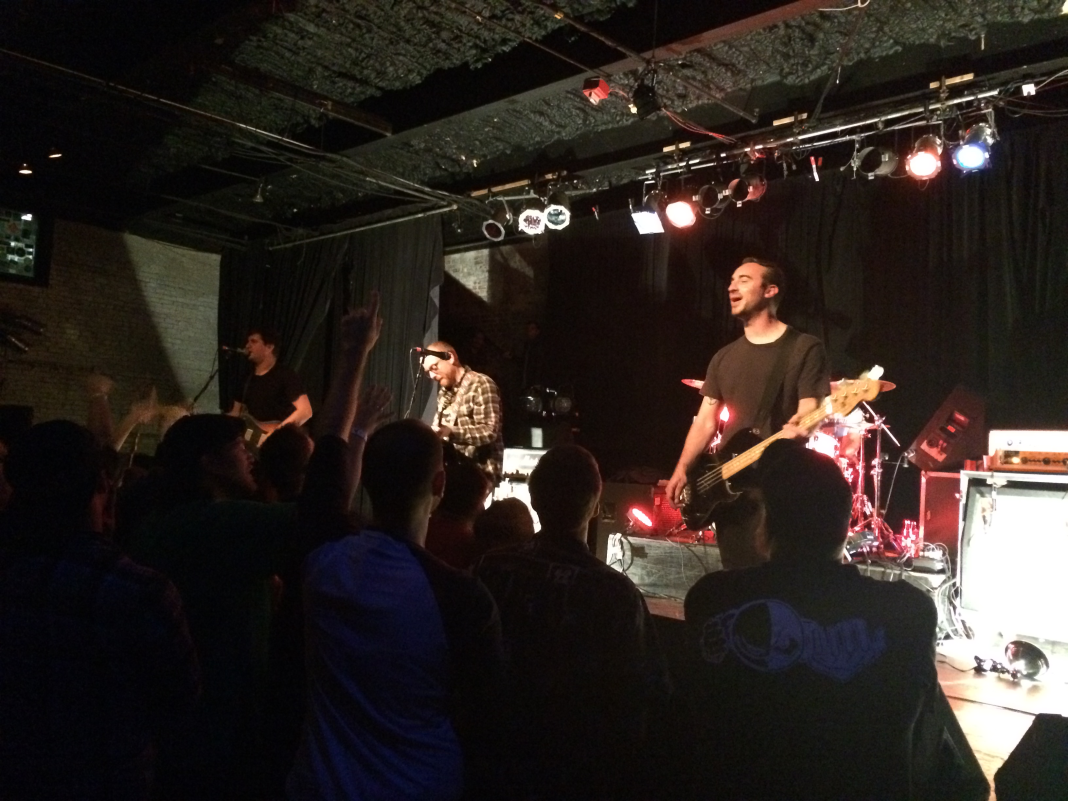 Given the popularity of the two co-headlining bands, and that mewithoutYou’s last Dallas show at Club Dada sold out, The Door was surprisingly unoccupied on Wednesday night. Traffic on 75 was particularly bad that evening, and people certainly did trickle in as the night went on, but the audience only ever loosely packed about half of the large room. The four bands on the bill all fit somewhere beneath the largely vague umbrella of punk, and each brought remarkably different energies to the space. Such a high energy package would have been better suited in a smaller venue that the audience could have filled. Nonetheless, it was a satisfying evening. Restorations, from Philadelphia, were the youngest band on the bill. The audience as a whole were unfamiliar with their material, especially songs from their latest release titled LP3. Despite playing to a small and unprepared crowd, Restorations warmed up the room with a mellow brand of rock, featuring a subtle twangy warmth. I found that I didn’t agree with the shoegaze description that I’ve often heard applied to Restorations. Instead Restorations came across as a more straightforward rock band: think post-hardcore influences with vocals reminiscent of heartland rock. I suspect that within the next few years a greater portion of the audience will be coming to see Restorations, because they are good at what they do, Dallas just wasn’t aware of it before.

In stark contrast to the previous act, members of the audience were singing along as early as the first line of Pianos Become The Teeth’s set. They opened with “Hiding,” a track that shocked fans upon its release in 2013 due a major stylistic change— vocalist Kyle Durfey sang on this track. On 2014’s Keep You, Pianos dropped the screamed vocals of their past altogether, favoring the emotional clean vocals that won people’s hearts on “Hiding.” While Pianos may have given up some degrees of aggression on this most recent album, they did not sacrifice any amount of intensity. They filled the space with their loud, full, and distorted post-rock-esque atmosphere, and Durfey’s strong vocals were moving. Audience members passionately sang along to emotionally loaded tracks like “Ripple Water Shine” and “Repine.” Although Pianos delivered a fervidly intense set, I couldn’t help but crave the aggression of their earlier material, and was wished they had incorporated a couple songs from The Lack Long After into the set. The room was at its fullest during mewithoutYou’s set. A wonderfully diverse band, mewithoutYou perfectly balanced soft songs with aggression, new material with old. The band has been around for fifteen years, and satisfyingly included a blend of songs from their newest album as well as well-aged fan favorites. Vocalist Aaron Weiss is incredibly dynamic, almost theatrical in his performance. It’s clear that every member of the band just pours themselves into their music. Audience members gave the set everything they had too, piling on top of one another during “My Exit, Unfair” and softly singing along to “Aubergine.” Just as there aren’t many bands that share the unique tones and structures and the fantastically smart lyrics of mewithoutYou, it’s hard to think of artists who put on a live performance as dynamic, entertaining, and cathartic.

mewithoutYou are a tough act to follow, and while a handful of people did leave after they finished, The Menzingers did not disappoint. The crowd was more active during their set than at any other point in the evening. Their high-energy pop-punk music invited the audience to enthusiastically sing and dance along. The Menzingers have gained quite a following in their near-decade of existence, and the crowd had an interesting range of ages. Older dudes as well as teens were jumping around, and there was even a toddler sitting on his dad’s shoulders watching from the back. Crowd surfing happened frequently and the audience, although still rather loosely packed, did a good job of helping each other out. The songs were heartfelt and angsty, clearly influenced by ska punk bands like Leftover Crack (lots of those shirts in attendance that night), and lots of fun; however, to an unfamiliar ear, the set could seem pretty homogeneous following the highly diverse set that preceded them. The Menzingers ended with “The Obituaries,” a popular song that got previously stoic members of the audience bouncing and singing along.

All in all, this tour package was entertaining and interesting. The lineup worked for a well-paced night of great musicians and dedicated fans. If only the event had fallen on the weekend, I think these bands could have filled the room, but the performances were strong enough to ensure repeat attendance next time.