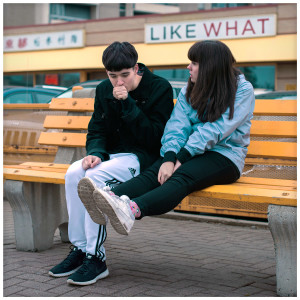 A new face to the expanding world of musical young talents, brother-sister duo Tennyson of Edmonton, Canada set the tone for what seems to be a new sound for thought. Utilizing extraneous yet pleasing noises of everyday life in combination with meticulously thought out themes, their Like What EP exemplifies the two teens as up-and-coming musicians with a passion for quirky fun.

If you can’t buy into the idea of another electronic duo, perhaps change perspectives on the image on Tennyson; it does them more justice. What sets them apart stems from multiple things. For one, formal musical application – notably of the jazz variety in intonation, flow and anticipation – something you don’t see too much of. Another is their exploitation of sad themes juxtaposed to stirring jazz riffs too fast to mock and too quick to catch. Last, and most impressively, Tennyson never repeats a song. Even from the early uploads of their Soundcloud has there been a steady shift and discernibly unique movement, all leading up to whatever is happening now in the Like What EP.

Like What is the culmination on all aforementioned ideas, and some new, spread between 6 dynamic tracks. The release can be explained well by its intro/title track “Like What.” The slow, ambient rhythm evolves into a somber-toned glitch-hop production, but continues progressing into a different idea somewhat startling. Humanistic sounds, such as the familiar echo of heavy steps ascending a narrow stair corridor with low-passed effect present the illusion of day-to-day life, probably relative to the two. The song ends on the polar opposite from how it started, and I, the listener, thought back to all the themes that occurred just in this one song. This as a whole parallels the track listing, as each song transgresses its prior in style and keenness.

This is the first release from Tennyson that also fashioned lyrical elements of substance. With strong resemblance to Ryan Hemsworth’s 2014 Alone for the First Time, tracks on Like What such as “Beautiful World” and “Fault Lines” mirror the emotional efficacy. The songs are more structured, less climactic but still cutesy and swinging. What these slack on is the finesse of the vocal recordings; a relatively flat sound all across the board of the lyrics brings down the energy, but not so much to deflate. Redeeming tracks such as “7:00am” and “L’oiseau qui danse,” out do all else as the next and best of Tennyson material, everything from the erratic jazz riffs to the whistles, alarm clocks and claps.

In summation, Like What EP sounds somewhat like it reads. A new ear to Tennyson might be derailed by what is going on, or may embrace its variance and fluid lack of lucidness. Some context could aid in swaying the listener to keep listening, but Like What EP is a one of a kind. Despite some bumps and dry spots, it seems to be progress for the Canadian teens.

The EP is free to download from their recent feature on Yours Truly.