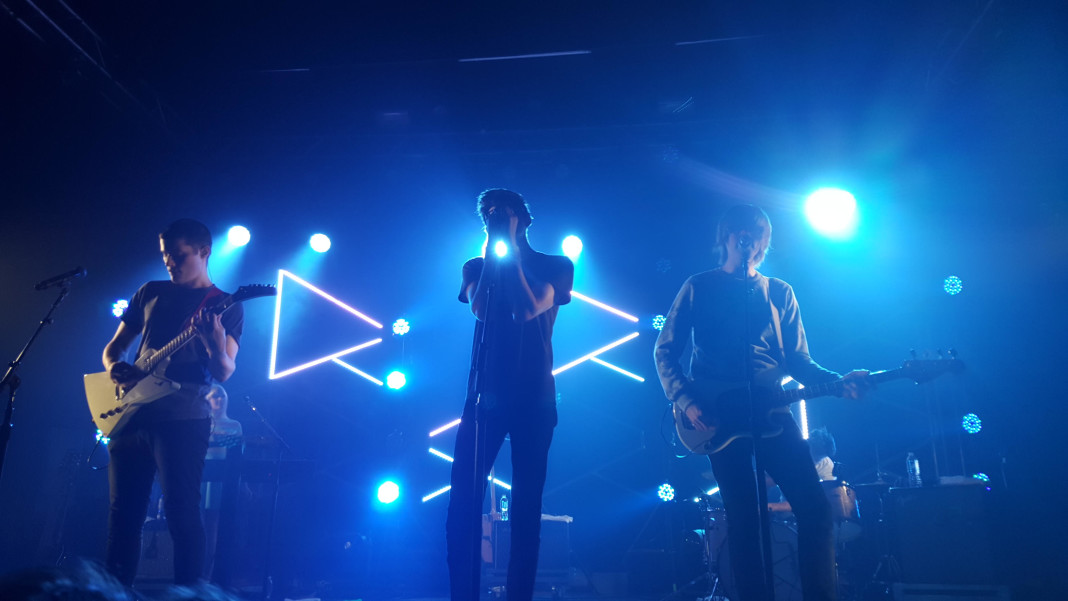 As groups known for their established “paranoid electronic” genre of music, Big Data and RAC presented a stellar performance Sunday night. Big Data started out the night, and their “simulation”, as they called it, opened and closed with their hit “Dangerous”. For forty-five minutes or so, the band exposed the “humanoids” to a rave of light, sounds, and tasteful robotic dances. Like well oiled machines, the lead singer Mr. Big Data and his band were conducting synchronized robotic moves constantly. This paralleled nicely with their projection screen which was constantly rotating videos of old-school pc design and new internet propaganda.

As a set, it was complete – digital music, crew, media, and lights. The commitment went so far as to the way they talked to us between songs, and the costumes they changed into, like a neon dress, and matching neon glasses. The audience was dedicated to the performers and wore their Big Data shirts with pride, most of which being there as preexisting fans. Needless to say, they were not let down, and enjoyed the ride. As a whole, it was a performance coordinated correctly, and enjoyable to spectate. RAC, short for Remix Artist Collective, has seen a very different light than most bands when it comes to establishment, and their performance reflected a conflict in such grounds. For a little background, the band was founded off of remixing various artists hits, and rose to fame by getting on B-sides and singles. Most of their remixed songs were genre conversions that resulted in a more club focused beat. With that said, the expected performance would be a group behind their keyboards and computers mixing it up. However this was not the case. The focus of the performance was on their newer material which was a series of collaborations, and independently created music featuring more guitars and less mixing.

As a fully functioning band, RAC, opted out of using any pre recorded songs, audio snippets, or produced material. Everything was done there on the spot, through imitation. For example, they sang Two Door Cinema, Foster the People, The Cranberries, and many other remixes, instead of using the original audio. For some this really pulled away from the clean, older RAC, and re-emphasized on the new band approach they are currently taking on. Regardless, the crowd loved it, and everyone sang along where they could beating the audio coming from the speakers ten-fold — so would it really matter if it was the original audio or not? Bottomline, if you’re looking for the old RAC, like the Toyko Police Club remixes or even the newer collaborations with guest singers, don’t get your hopes up. There isn’t a mixer, and they sing everything themselves. However, if you’re looking for newer originals like Cheap Sunglasses or Hollywood, prepare to be sated, for the newly reimagined band is full of overwhelming energy and completeness. I guess now you can actually call it a collective.