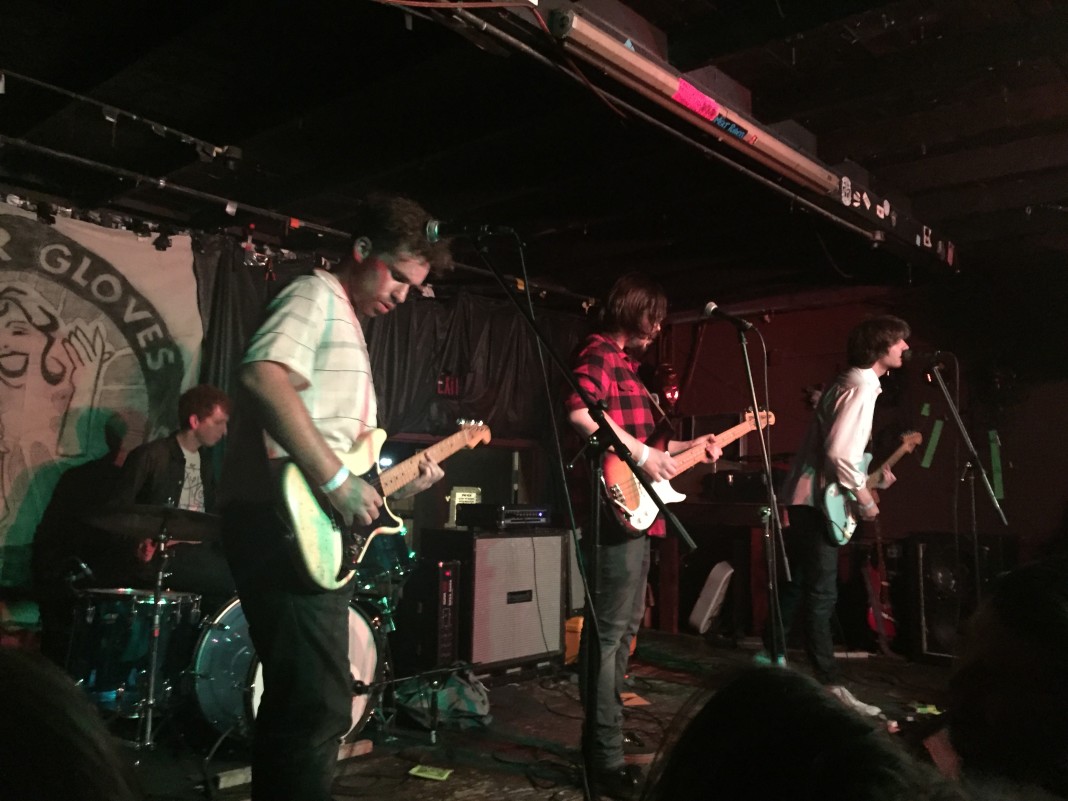 Following an erupting night of Soundcloud jams from Slow Magic and Giraffage at Trees, I decided that becoming deaf by attending Parquet Courts’ homecoming show at Denton’s Rubber Gloves Rehearsal Studio was a good idea. The Noids instigated a roll call to the stage by doing a soundcheck with booming guitar feedbacks. They kept the crowd assembled through short and fast garage punk beatitudes. The trio kept a calm composure throughout their brief and energetic set, the complementing showcase fit the dark room green lighting very well. The set was just loud enough for my soon-to-be deaf ears.

Sin Motivo immediately picked up where The Noids left off after a long intermission. The band played long, heavy ballads that were warmly received by the crowd. They showed their love by moshing as much as possible, but the gathering was just too small for a formal one to break out (more on that later). The drummer vibrated the room thoroughly from sitting front and center, and the lead singer’s charisma and animated persona emulated the band’s loudness. During their last song, the singer dropped the mic once his duty was fulfilled, and paced out of the room through the crowd. He was last seen smiling. By the time Party Static went up, the room was enveloped by the smell of PBR. Something was definitely in the air. Their energy was fully present throughout their set. They regrouped often within themselves, those fifteen seconds or so were littered with extremely loud feedbacks. The girls’ bromance was refreshing to see, and the 90s riot grrrl aesthetic was preserved and fully on display.

After the longest intermission of the evening, the hometown heroes were armed and ready to go, and so was the crowd. The room filled to the brim, and the band opened the show with three songs from their new record Monastic Living and then dived right into the good ‘ol stuff. The moshpit broke out during the third track and was on and off for the rest of the show. Parquet Courts entertained with interesting anecdotes that sampled some of their stand-up comedy material, and played music from all of their projects. The long, rewarding set made it worth driving to Denton during a tornado warning. And yes Austin, you were using “matriculated” correctly.

The packed showcase of stormy performances went well with the stormy day. The radiating performances painted the walls and ears in attendance full of colorful sound, and Parquet Courts laid down the final brushstrokes with precision. It was the best possible way in which to lose your hearing.