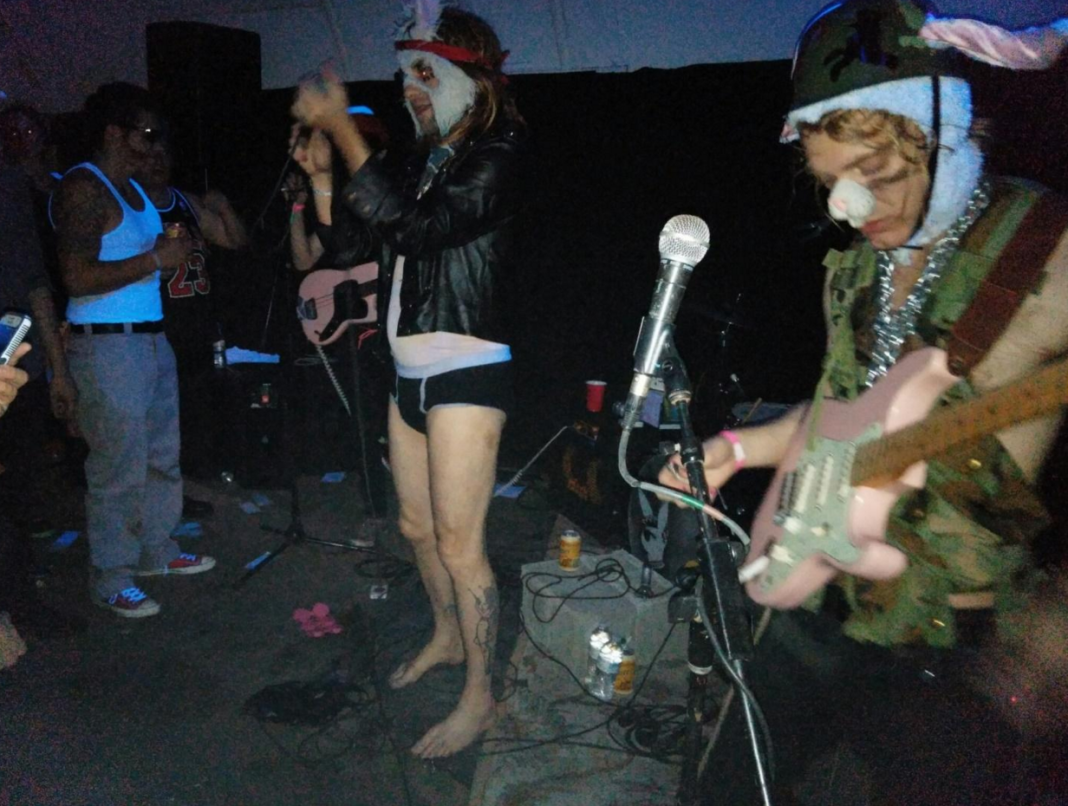 Pariah Arts is hidden in a cove of produce storehouses and living areas, but that didn’t stop the freaks from coming out this Halloween. Of course, the wild Nobunny, with his reputation for theatrical performances and casual costuming, ensured a fine All Hallows’ Eve. Throw in Atlanta’s trio The Coathangers, Denton’s Pearl Earl, and Dallas’ own Party Static, DJ Shooknite, and Yung Wave, and you, my friends, have got a Halloween sure to make your toes curl and body shake.

The Pariah seems to be a World War II-era storage facility, and if the wet chill of the night doesn’t give concert-goers the heebie jeebies, then the droves of costumed young people around the building’s semicircular husk surely would. The performance room was decked with little glowing ghosts, and the lights stayed low while assorted wigs, Guy Fawkes masks, and animal ears bobbed in and out for a cigarette break or a drink from the makeshift bar. Somehow, there is simultaneously barely enough room to squeeze by and more than enough room to flail any extremities you’d like. This dynamic was optimal for the performances of the night, as successful (and potentially dangerous) pits could form, yet one could still grab themselves a corner of the room and admire the spectacle that was both musical performance and audience enthusiasm.

Shooknite and Yung Wave started the night, bringing a solid soundtrack for those arriving to look around and wonder if the person in the Rick Sanchez costume was the guy who worked at the Starbucks on their street. As more and more bodies flood in, the focus on the music becomes more and more prominent as the possibility of sensory overload becomes more likely.

As Pearl Earl took the stage, dressed as members of KISS, the audience who came for the psychedelic garage superstars swarm around them. Their costumes were incredibly detailed, and lead vocalist Ariel Hartley must have been channeling Gene Simmons, as both the attitude and visual resemblances were uncanny. The four-piece band jammed through most of the tracks on their Karaoke Superstar EP released earlier this year, attaining a near-perfect grooving streak during “Witches Brew”, their title track “Karaoke Superstar”, and “Head Up”. Keyboardist Charlie Beaman kept a spooky organ-sounding tone behind the brilliant fuzz of each song, further accentuating the witch-crew vibes of the group, while drummer Bailey K. Chapman and bassist Stefanie Lazcano seemed to lose their souls while keeping time. The audience became one jumbled dancing mess, with cat ear headbands and Lennon glasses littering the floor while everyone shook heads and shimmied shoulders.

Dallas natives Party Static were also appropriately clad, playing as members of the Village People. Bringing a shift from melodic trippy rock to slamming sweet nonsense, the fast and steady rhythms of bass player Alex and drummer Billy set a solid base for guitarist Billy’s powerful riffs to slide over. This spirited cacophony was topped with the double shouts of their vocalists, Laura and Kjersten. The result was music that allowed for dancing of all types- from subtle body waving to spirited power punching. The band exuded friendship, and kind of made you feel like you were allowed at their cool hangout while they were having band practice. When the sound system cut out during the debut of their newest song, they all shared a laugh and a joking look before it was promptly restored and the whole party started again with a tune no one had heard but everyone loved. The enthusiasm Party Static brought to the Pariah has surely made Dallas proud.

Nothing says cool like matching cheerleader skirts and jackets with your names on them, and The Coathangers were the epitome of cool this Saturday night. With the beginning of The Coathangers’ set came true madness in the audience. Where painted-on animal noses once were, makeup stained sweat streaks dripped, all while Atlanta’s all-girl trio launched through tracks from their albums Suck My Shirt, Larceny & Old Lace, and their self-titled debut from 2007. With slick choruses and powerfully chopped riffs, the combination of old jams and newer favorites all performed with the same force caused a continuous pit of varying intensities. A wall of audience members formed around the band, shielding them from the hurling bodies of their most physically intense fans, and attempting to protect the stage setup itself.  As boxes of candy cigarettes rained on the crowd, elbows were thrown and shins were kicked, even after members of the band told us (and I’m paraphrasing here) to get ourselves together. There was no calming the audience down, however, and The Coathangers were the very reason.

While the face of Nobunny- stage persona of Justin Champlin- is often covered with a bunny mask during performances, his performance theatrics were surely amplified for his Halloween headlining set. In nothing but a mask, a leather jacket, and a pair of underwear, Nobunny took the stage with the air of a marching band leader, and led the audience in sing along of his song “Your Mouth”. His backing band, also curiously dressed and wearing bunny masks, waved their arms and clapped along, as though the freak parade was finally on our street and the stage was the prize float. As the audience went from timid anticipation to howling lunatics, Nobunny stood on a monitor and towered over us as the true overlord of Halloween, shaking his barely clad hips and hollering the catchiest hits. The power pop-style tunes coupled with the overall raw and fuzzy garage sound brought the best of both worlds, and left the audience with a choice- do I throw my body around like a pinball, or do I shimmy-n-lightly-flail in a personal jam? In the end, it didn’t matter, and everyone ended up doing a combination of both. As Daylight Savings time took effect, it really did feel like time had gone backwards as we lost ourselves to sound and dance, and even though Halloween is over, the effects of Nobunny’s spell on Dallas is sure to last.