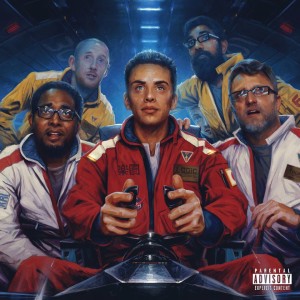 Logic’s debut album, Under Pressure, rose to critical acclaim for his honest reflection of growing up in a low-income crime-ridden Maryland neighborhood, but critics across the board lobbed disapproval at the album, saying it un-abashedly ripped off hip-hop’s biggest names, Kanye, Drake, and Kendrick in particular. While his storytelling and quick-witted punchlines captivated listeners, he was also subjected to more harsh criticism, being called him out for his dependency on repetitive melodies, excessive emulation of the rappers that influenced him, and even his own validity as a rap artist due to him being half black and half white. Regardless, the hype surrounding his second album and whether it would fall victim to the dreaded sophomore slump kept him under a very critical eye as he started promotion for The Incredible True Story, in early September, something Logic had expected and was more than prepared for.

Unfortunately, it seems like Logic is back to his old ways. The Incredible True Story starts off with the track “Contact” and opens with an exciting Japanese Taiko drum, that’s essentially a blatant rip of the drums off 808’s and Heartbreaks “Amazing” with Young Jeezy. This is even more shocking when you remember that Logic started off Under Pressure with the same sample Kanye used in Bound 2 just a year before. It’s at first familiar, then jarring, and finally a wave of embarrassment washes over you, resigned to listening to the same old song and dance. The sample is followed up with a subtle choir and sharp violins, something one would hear while watching a trailer for a summer blockbuster. The orchestra breaks and a faint whistling begins as a conversation between astronauts opens the scene Logic is creating for the entire album: a space mission. A familiar voice appears, Thalia, our narrator from the last album “Under Pressure”, but it doesn’t seem like she’s talking to us anymore. Instead her attention is directed at the two new voices that appear, they are referred to as Thomas and Kai. They have clearly defined personalities and it is obvious that their mission to find mankind a new planet and potential home called Paradise, serves as a metaphor for our own mission to navigate through the album. Logic, while not as intimate as he was in his previous album, is more self-aware. The scene at the end of “Fade Away” has Thomas asking if he’s upgraded the AI (Thalia) to which Kai responds “Nah man! It’s the same shit with a different title!” an obvious dig at Logic’s critics who find his work relying too heavily on the same structure of long verses with fast flows and repetitive hooks. Songs such as “Like Whoa”, “Upgrade”, and “Lord Willin” do become minor casualties of this format. Logic repeats the titles in his chorus over and over again, while at first with “Upgrade” the effect was quite captivating. The beat and his dynamic inflections mix well to create a lively refrain. However, when he repeats it again in “Like Whoa” and “Lord Willin” the melodies are slower and they sound more perfunctory as compared to Logic’s usual well thought out verses and production. What’s appealing about Logic’s use of this technique is he is aware of the critics’ disdain for it. In “Never Been” he slams back “Talk all you want about me homie, Imma let it live/ Hater this, hater that, know I sound repetitive”. Logic likes it, and he’s going to keep doing what feels right for him.

This doesn’t go to say that Logic’s new album is a prosaic result of a bolder attempt. Where “The Incredible True Story” beats “Under Pressure” is Logic’s ability to flesh out many different type of themes for this record. “Young Jesus” an obvious homage to the nineties with all the classic elements such as looping samples, electronic drum beats, and clever punchlines is memorable and can be enjoyed on its own. In classic Golden Age hip hop style, he mentions his roots and the struggles he lived through, but also how now that he’s made it he doesn’t care when people want to bring him down. He feels like a winner no matter what. “Innermission” a play on the words “intermission” and “inner mission” acts as a great point in the album for the listener to reflect. Logic raps over a simple beat with faint, discordant electric guitar and clarinet samples. The chorus is sung by Lucy Rose, who uses a breathy voice that moves wherever the melody takes her. A welcome reprieve right before the second half of the album starts. “I Am the Greatest” samples Muhammad Ali’s spoken word album and “Fine for You” by Grizzly Bear. These two components seem like oil and water. Those listening for Muhammad Ali’s Cassius Clay record are vastly different to the ones listening to Grizzly Bear, yet Logic creates one of his strongest tracks from this blend. This seems to be a part of Logic’s identity, mixing two vastly different ideas into one.

Where Logic excels most is in “City of Stars” a self-proclaimed break up letter with hip-hop. While personifying the hip hop industry into a woman, he sings “her” a break up song. “You did me so wrong for so long, so long/ no I never thought I could live my life without you” Logic croons right before leading into the hook. The motif of personifying hip-hop as a significant other is a well worn one, but it’s done with a deft hand here. He knows he will never receive the proper accolades for any of his albums, because there will always be something he did wrong. “City of Stars” is not just a break up letter, but a declaration of freedom for Logic. From now on he will produce the music he wants to hear, and dismiss the haters. The title track ends the story in the most dynamic manner. It starts off pretty typical with a soft electric guitar and drums backed by a saxophone. Logic sings “Who am I” and then it shifts to Alan Watts famous speech about living life to the fullest, to Kai and Thomas’s last banter while they’re descending into Paradise. The moment they land the music abruptly changes to a beautiful piano arrangement. The sound of the breeze, insects, and birds chirping get progressively louder as Thomas asks “what is that noise?” The sound immediately cuts off as Thalia responds “life”. This dramatic but simple end leaves the listener in awe and that he or she has just experienced the journey Logic intended for them.

It’s hard to say if The Incredible True Story is one of the better albums of 2015. Not many tracks stick out and leave an impression, but the entire album feels like it’s going to be around for a while. Logic’s boldness in calling out the hip hop pundits and creating an album that was influenced only by his vision proves that he has the capability to adapt and thrive. The most important aspect is that the album was intended to inspire his listeners as well. He wants us all to rid ourselves of our albatrosses and pursue our dreams. He is truly leading us to Paradise, but he hasn’t fully embraced what makes him an interesting rapper, or even really learned how to put it together.