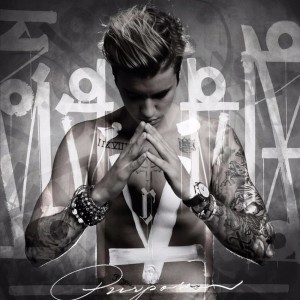 RT: “What Do You Mean?”, “Love Yourself”, “Company”, “The Feeling”
RiYL: Justin Timberlake, The Weeknd, Jack Ü

Justin Bieber, international sensation and arguably the worlds biggest musician, started off in his hometown of Stratford, Ontario as a kid with a drumset. At the tender age of 13, he was discovered on accident by a popular American talent manager Scooter Braun. From then on, Bieber went on to debut his first album My World in 2009, getting certified platinum, releasing more successful albums such as Believe in 2012, and eventually going on world tours and having his own documentary. However, through all of this, many seemed to have forgotten that Bieber is a growing teenager. The time of innocent fame turned into a career riddled by defamation due to poor decisions within a few years.

However, JB is back, and he’s making sure people “Mark {his} Words” when he says he’s ready to give his all because he doesn’t want to lose anymore trust from his fans. This album, from the start, gives a sort of softer Jason Derulo Undefeated vibe. The lyrics are very raw, simple, and revealing as Bieber is indirectly referencing much of his recent troubled past. However, this realness, coupled with his soft voice, adds an alluring trance to this album. The use of synth in many of the tracks adds a nice dance-pop feel to many of the songs, specifically the tracks “What Do Ü Mean” and “Sorry” the albums two biggest songs, which induce a super dance-pop vibe with a touch of EDM. “Love Yourself” is a much simpler acoustic track, which reminds of “Stand By Me” because of its nice campfire, clap-along sort of vibe

The album’s transitions from track to track seem to weave Bieber’s outlook on life right now and his message to people. He starts out by talking about himself, what he stands for now, and apologizing. Next, he transitions to more fun, light tracks that talk about loving oneself and those around you. After that, “No Pressure” until “Where Are Ü Now” features his collaborations with various equally talented artists, like Skrillex and Diplo. Bieber flexes his clout in the hip-hop world and has tracks with some of the genre’s biggest names like Travis Scott, Big Sean, and even Nas on the bonus track “We Are”. Tracks like “Life Is Worth Living” and “Children” are more upbeat, motivational songs. Bieber sprinkles in some references to his personal life, the concept of love, and togetherness with the tracks “Been You” and “Trust”. The sort of “wrap-up” track to the album is “All In It”, which talks about how one should put their all in whatever they are pursuing. A few of the tracks, including “All In It”, have chunks in the middle of the tracks where Bieber stops singing and starts a sort of soliloquy. He talks about people’s perceptions of him, what those perceptions mean to him, and how his own perspectives on life and recognition have changed.

Overall, the album has a strong classical base with romantic piano and acoustic usage, but the primary feel of all of the songs is dancepop and hip-hop. The sounds become repetitive after the title track ‘Purpose’, which is the 13th track on the album, and nothing new is really introduced after that, but that is the ending to the regular version so it is a forgivable misstep. However, more than the vibes or anything of the sort, the lyrics and vulnerability of Bieber are quite notable. He uses the popular music of today’s generation mixed with a huge chunk of, well, himself. The collaboration with Skrillex and Diplo is probably the most successful of all the collaborations because the track ‘Where Are Ü Now’ brings a pleasant twist to the overall style of the album. Other than that, Bieber has just delivered a solid album and an evolution of his sound, but with no real standouts other than the singles, but maybe some of the albums deeper cuts will grow with time.