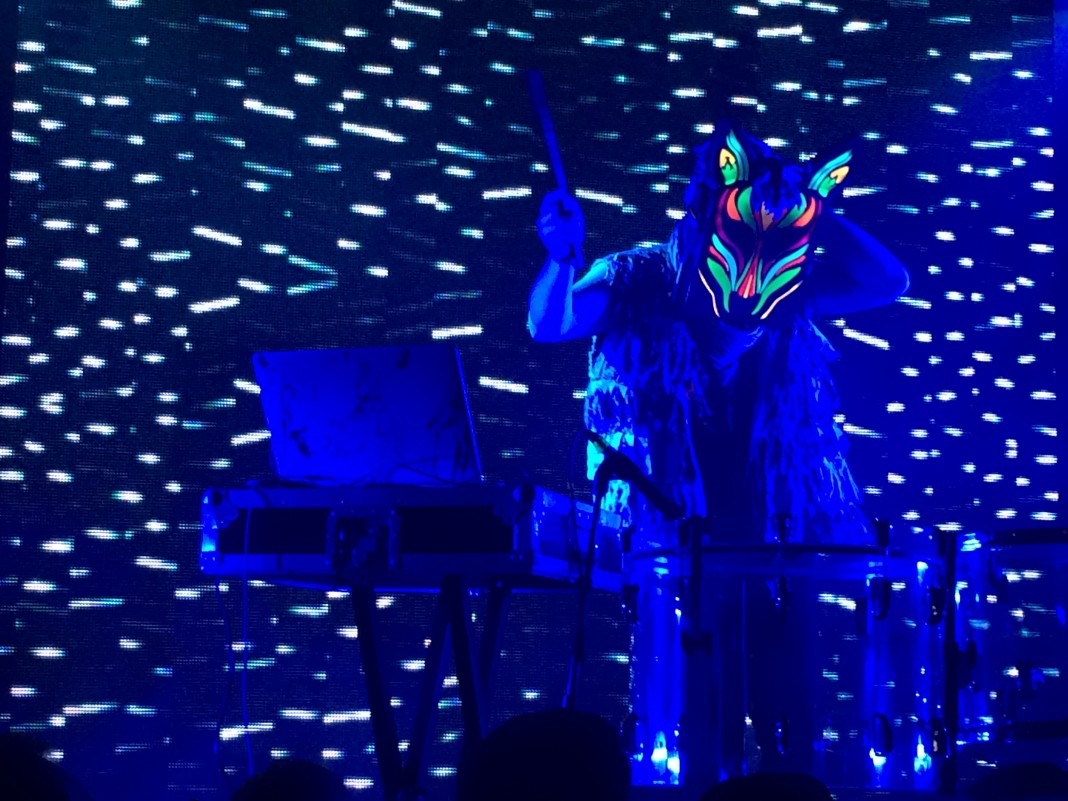 The So Cute! Tour, featuring Giraffage and Slow Magic, is the composition of a 3 year relationship between the two, co-evolving from their analog sampling projects into full-fledged, polished electronic artists. Possibly in their now adolescence as experienced touring producers, the two reunited for a tour showered in lights, pink, internet memes and casual fun. Dancing recommended. Dallas being the first stop of the expedition, it was undisclosed prior to what was really in store. Both Giraffage and Slow Magic boast their own respective fan-base, notably existing in Dallas, probably the same people, and those same people appeared to resurface for the arrival of the two with rapport.

The curtains reopened to reveal Giraffage assuming the stage along with a massive LED panel as the backdrop. Brilliantly colored visuals and imagery modulated and created the casual silhouette of Charlie Yin as he clicked on his distinguished APC, laptop and microphone. Remnants of his oldest fan-favorite, “Moments,” faded in and oscillated for a smooth opening. Tactile rhythms panned in and steadied the music to a beat, intensifying the audience to ready themselves for his first track climax. Without a hitch his music was welcomed by a jumping crowd. The music sounded fantastic; an ultra full sound with a bass so phat it shook you. This persisted throughout the set, but that wasn’t all. Images of anime stills superimposed on rainbows and acid-trip backgrounds came beamed in on the LED panel. Live action as well as cartoon figures made out in looping fashion. Recognizable Giraffage tracks such as “Waste Yr Time,” “Close to Me,” “Feels,” and many of his remixes were accommodated to the So Cute! flavor with blended in vocals and chirps that twinkled in and out. The least subtle but funniest was “Who Let the Dogs Out” integrated into “Money,” something UTD has experienced when Giraffage visited us last Spring. Unfortunately, midway through the set the audio began to sputter and eventually cut out, leaving the floor in patient chatter as we waited for the revival of his house remix of Tinashe. In time, the music jumped back in and Yin finished his set, of course with the inclusion of his remix of Slow Magic’s “Feel Flows.” Now we see what’s going on.

A short break interluded Graffage from Slow Magic. The curtains reopened to show an added dual light panel, bilateral to the laptop stand and large transparent tom drums mic’d up to maximum. The LED beamed a superbly pink omniscient light over the audience and the masked man in flowing cloths and vest entered. A wall of static morphed into piano of familiar chords that ambiently reverberated. Slow Magic raised his drum stick and intently hit the tom for the first time. It was such a pure acoustic sound, perfectly amplified and resonant in everyone, plus a nice tone that complimented yet contrasted the electronic nature of the night. The first chorus came in and he rapidly changed to a thunderous rhythm that made every start dancing. It was such high energy. The lights blared and swayed in synchronization up and around the venue, producing nothing short of stellar atmosphere fit for Slow Magic’s presence.

He continued his set with tracks from his latest album like “Hold Still,” “Waited 4 U,” and “Bear Dance,” in their entirety if not extended renditions. What captivated most people and enticed them to dance a bit was all the drumming and it didn’t seem to get old. Slow Magic took it to another level though and pointed once to the crowd, picked up his smaller of the two tom drums and made his way off the stage and into the abyss of people. The audience swelled to make room and face him, interacting with the zebra-masked dude as he rapidly drummed and everyone jumping in unison; truly entertaining. He retreated back to the stage as the fog machine enveloped the stage and front rows. The crowd cheered wildly. This was pretty common for next 30 minutes. Variances in his performance included unheard tracks, live drum renditions to remixes and an epic tom solo sensory-overload strobes and lasers. Chipmunk-vocals laced various tracks countless manipulations were made throughout without error. He ended his set by waving a finger for one more song. He built a wall of noise by spastic-ly pressing a drum pad overhauled with reverb. He high-passed in the sample of “Corvette Cassette,” causing many people to pulse in anticipation. The initial rhythm broke the suspense and nearly the whole front standing area pushed and shoved in mosh. The song ended and he turned on an extensive piano riff, that was rather pleasant, and exited the stage.

At this point no one would say it was over. The piano riff continued for probably 5 minutes, but the lights stayed on. Soon enough, Slow Magic reentered with his buddy Giraffage to play one final song. Charlie Yin took the microphone to speak for the two and mentioned how great the start of the tour was. The two have a co-produced song and they haven’t played it live, until right then. Giraffage took a drum stick along with Slow Magic and played the appropriately titled “So Cute!” to end the night. 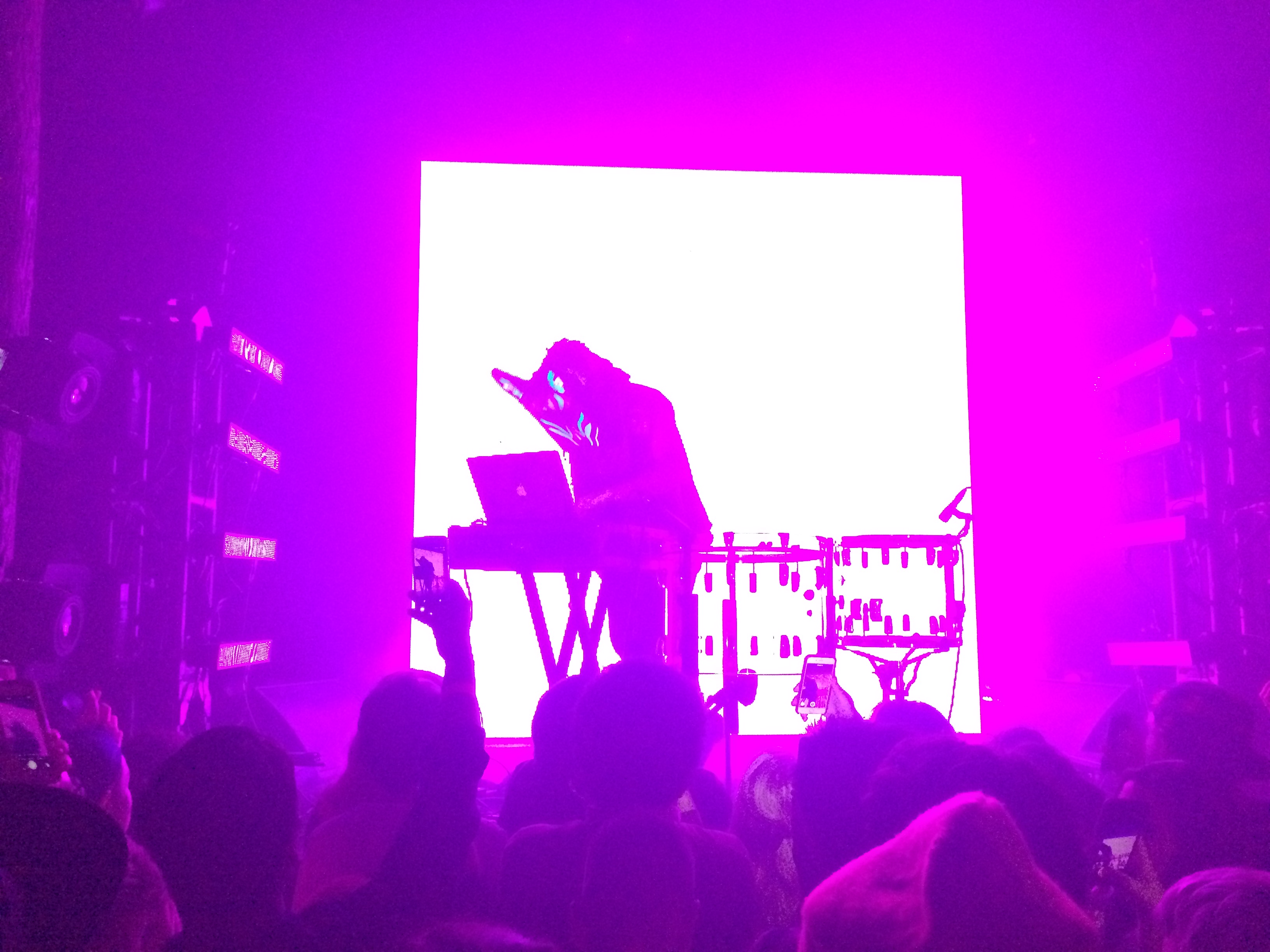 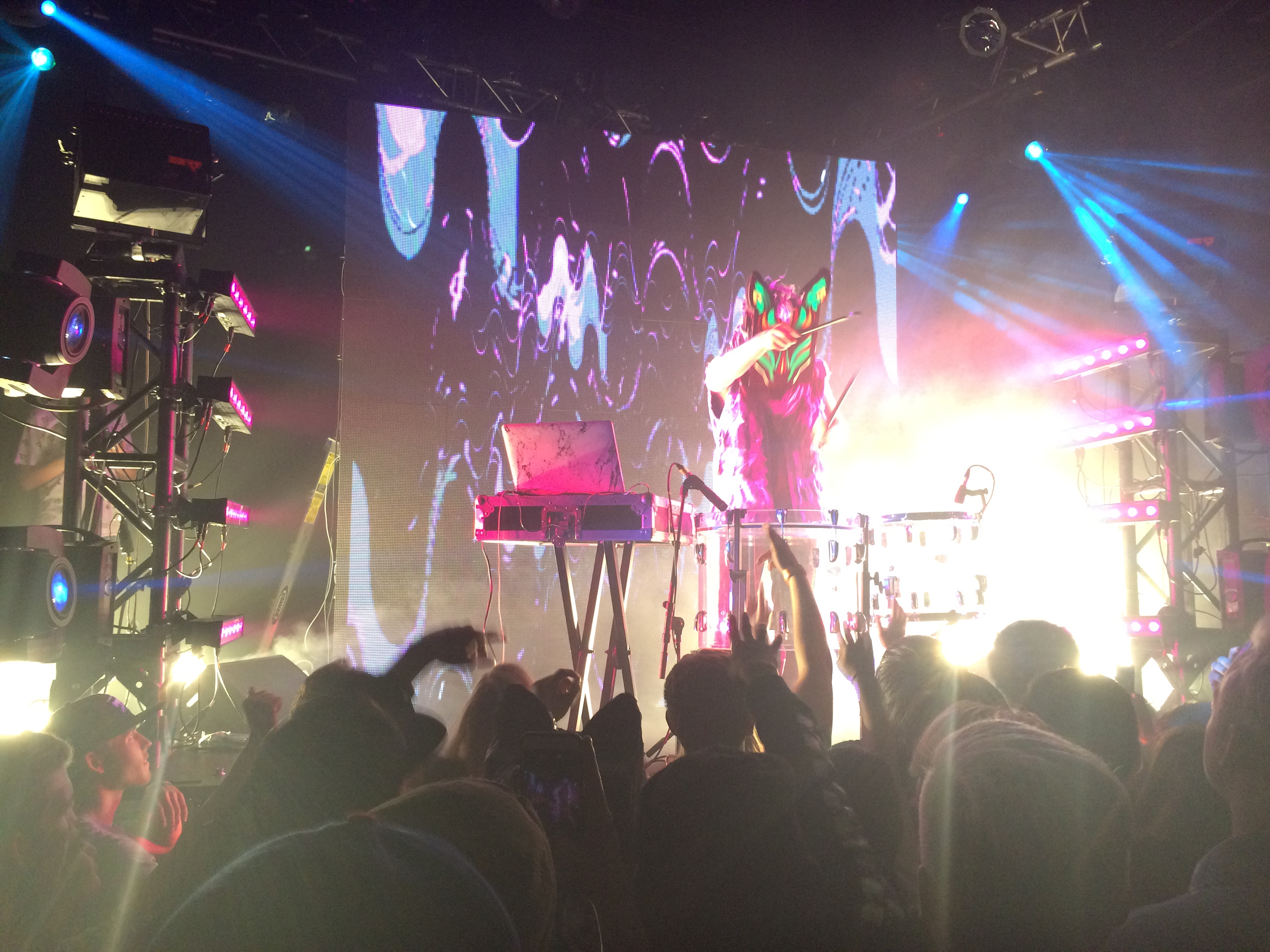 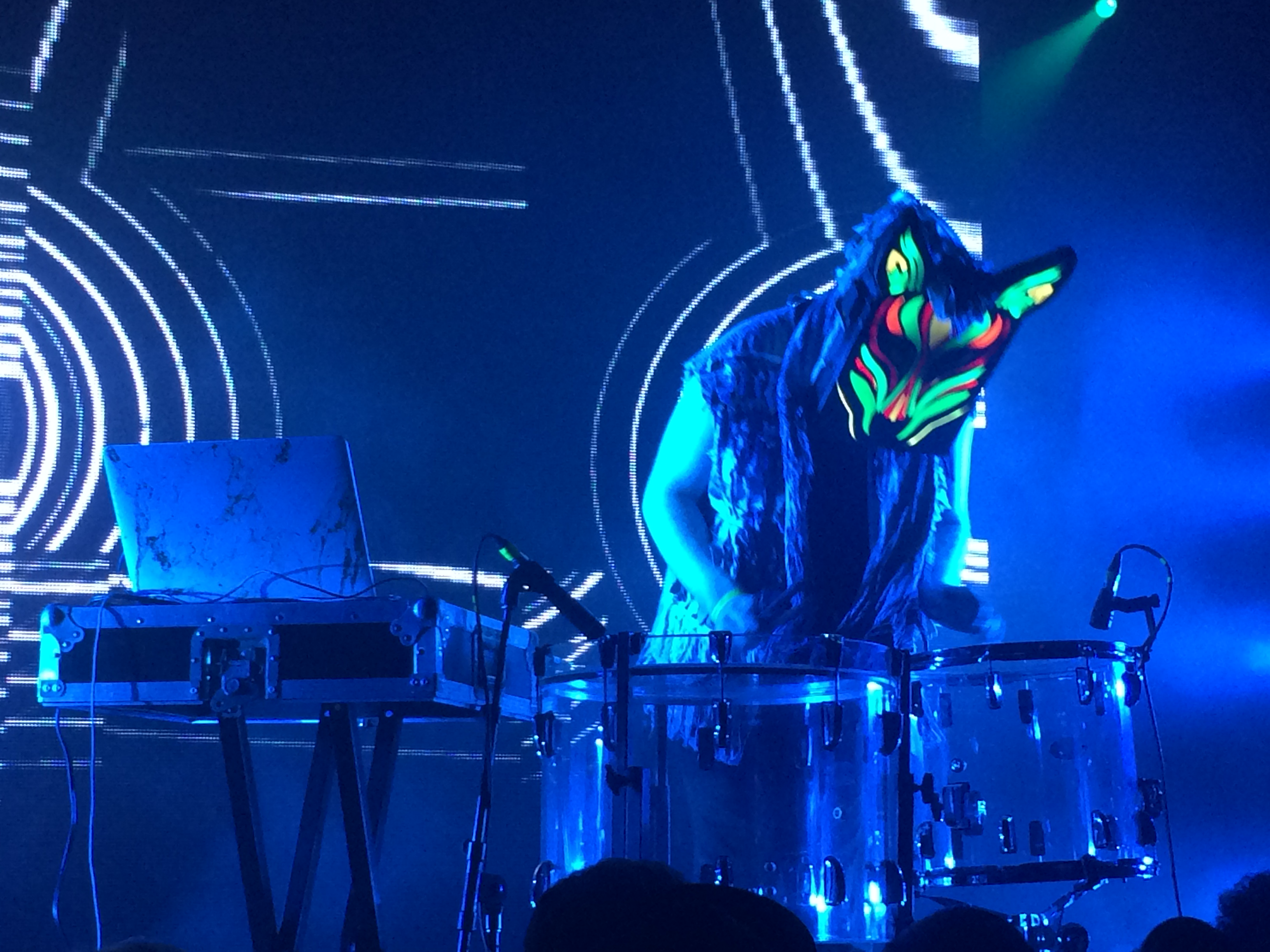 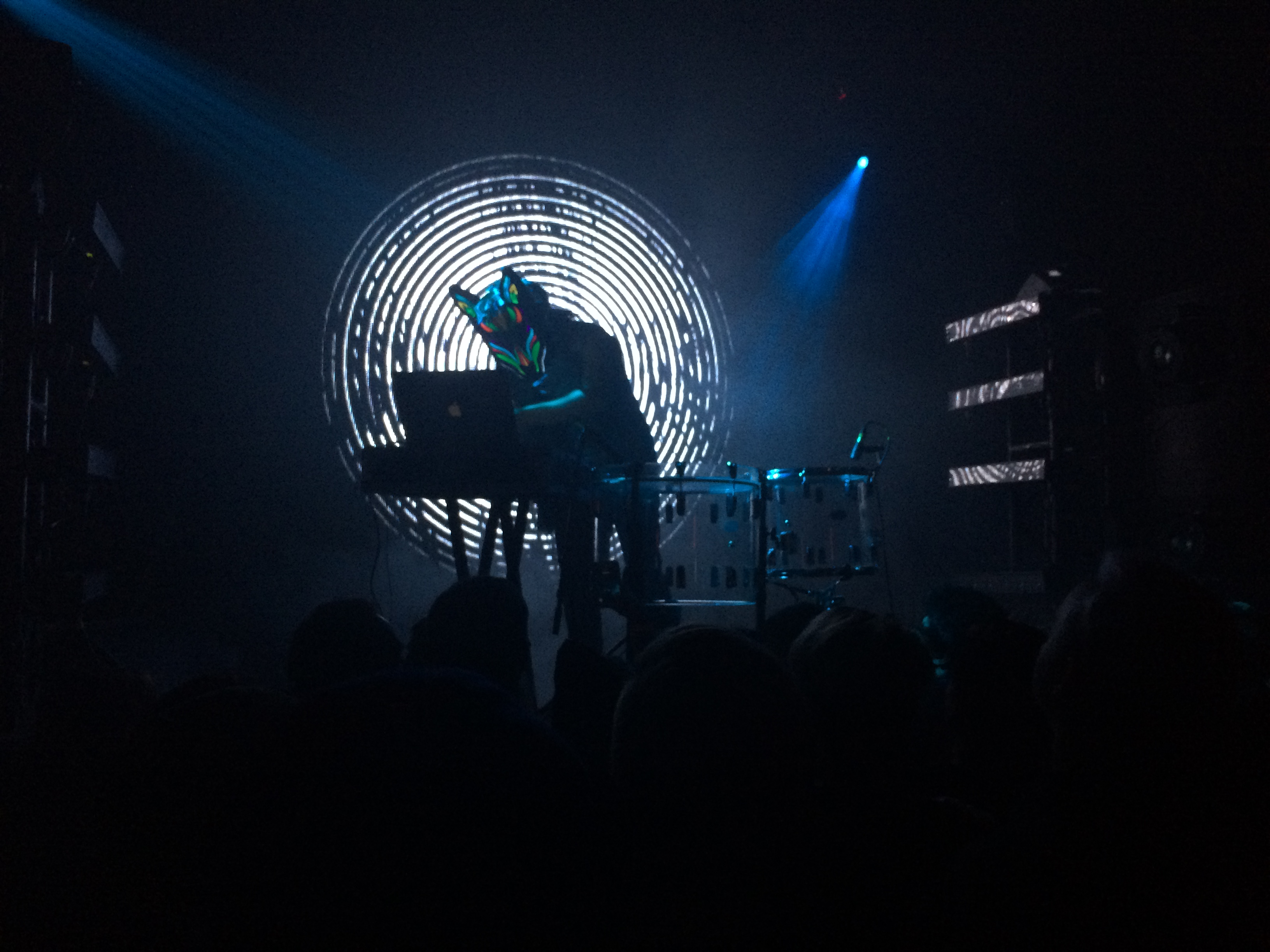 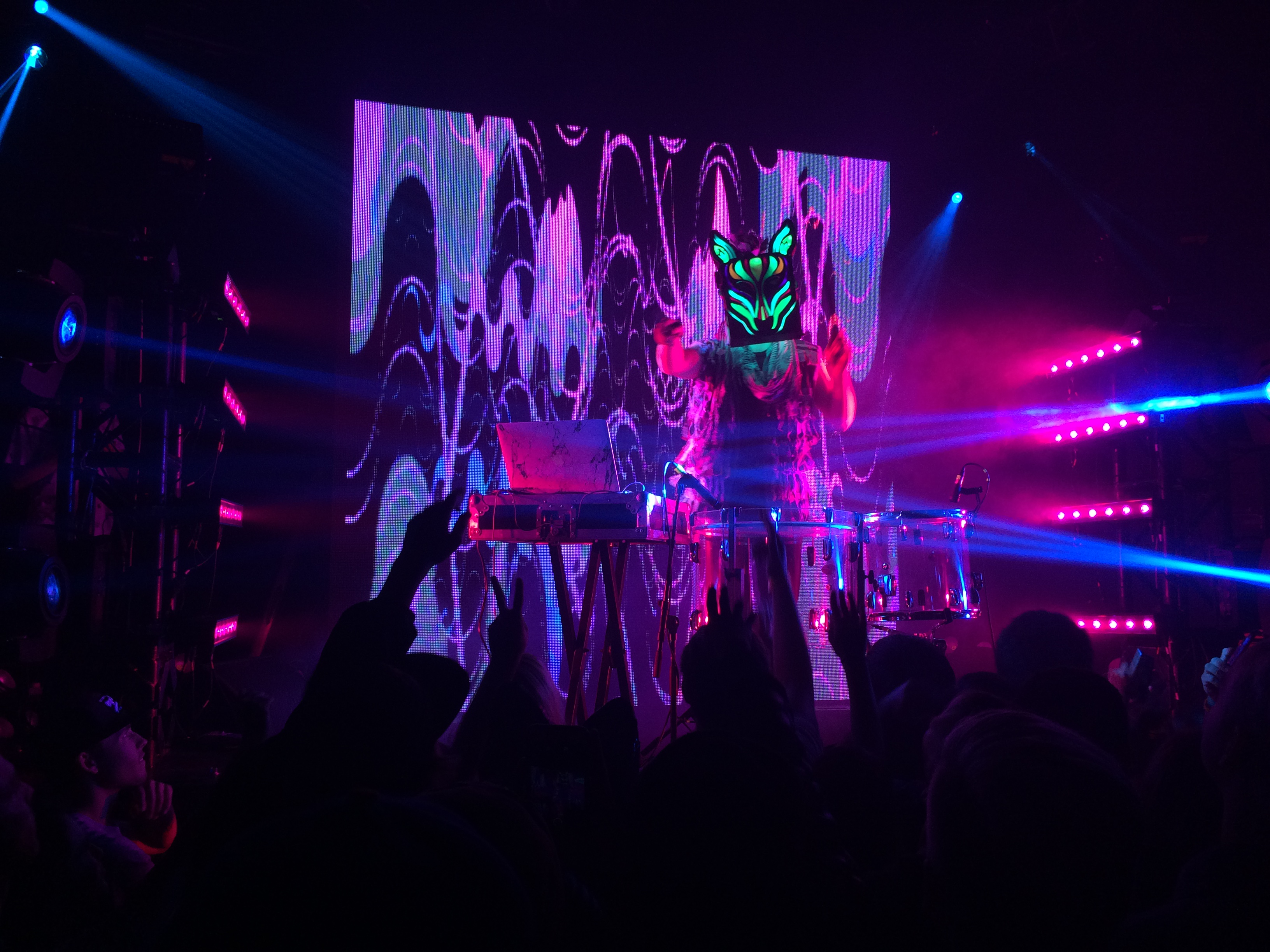