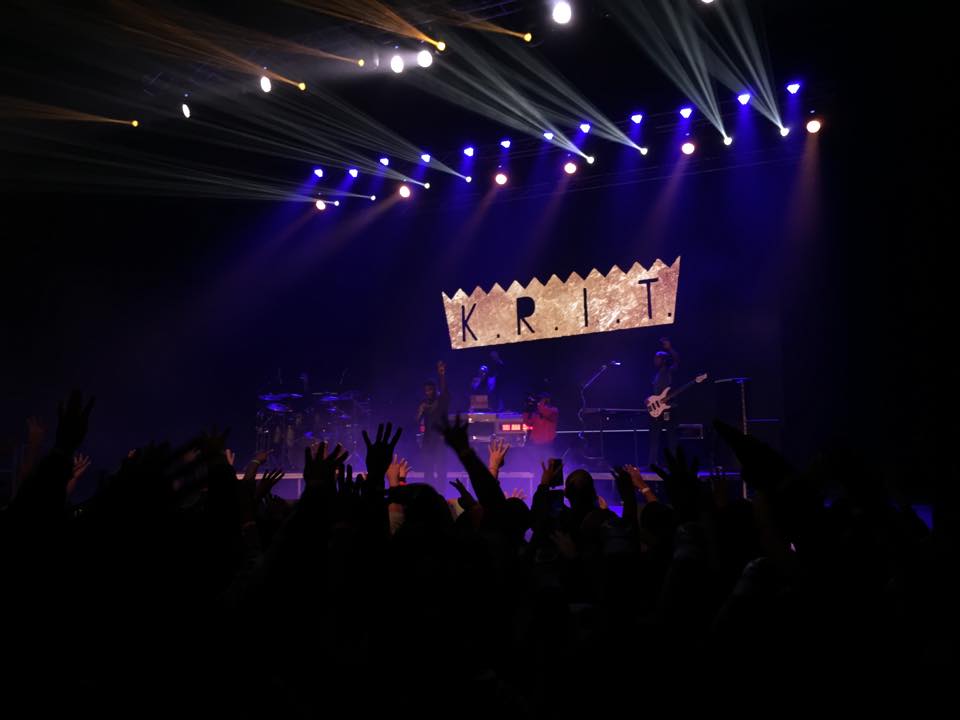 The King of the South, Big K.R.I.T. made his return to the streets of Dallas last night for his Kritically Acclaimed Tour. As we walked into the Bomb Factory, BJ The Chicago Kid was blessing the audience with his soulful voice, and his church like vocal runs. The audience was mainly filled with brothers and sisters who were born in the late 80’s so everyone had this old school type of groove going while BJ was performing which was really dope see. As BJ The Chicago Kid’s set was coming a conclusion, the Bomb Factory was starting to get packed out and the vibes were set for Big K.R.I.T to rock the stage. During the intermission I was choppin’ it with different folks, and seeing how they were feeling about Krit’s upcoming set. The majority of the people said that they have seen Krit perform every time he came to Dallas, so they already knew what to expect. That ultimately showed me how loyal Krit’s fan base in Dallas is. Once 10:30 hit, the curtains reopened, lights dimmed, and Krit’s logo was projected onto the Bomb Factory’s ginormous display screen. That’s when my friend and I had to conclude our raps with the random dudes at the bar and finesse our way to the front of crowd. A band called The Band of Brothers was accompanying Krit during his set, which made me things a lot more more interesting. His band consisted of two biological brothers, the younger brother was the drummer, the older was on the keys, and the bass. Once the band and his DJ got the crowd on their toes, Krit then came out on stage with full force performing his energetic song 86’ and surprisingly the crowd did not match Krit’s energy. For the next twenty to thirty minutes I was a little confused on why the crowd’s energy was so low. But then my senses finally kicked in and I remembered that grown folks don’t want to turn up; they’re already passed that phase in their life. Everyone had there own lil groove though, so it was all good. Krit then left the stage for about five to ten minutes; no one was quite sure what was going on. But during this time his DJ was mixing all of his hits from the K.R.I.T Wuz Here Mixtape to 4Eva N A Day like “Time Machine”, “My Sub”, “Rotation”, and “Glasshouse”. As I looked/listened around a good amount of people seemed a little upset that he did not perform any of these songs. These were the projects that built his “day one” fan base, so I am sure everyone wished that he had performed those. As the show concluded and the venue cleared out Krit and the band came out on the venue floor of the Bomb Factory to give his gratitude to the fans that stuck around after the show. Overall Big K.R.I.T held it down for the city once again and everyone left the concert satisfied. If you haven’t checked out Big K.R.I.T.’s last mixtape “It’s Better This Way” make sure you make your way to your nearest music streaming service to give it a listen.