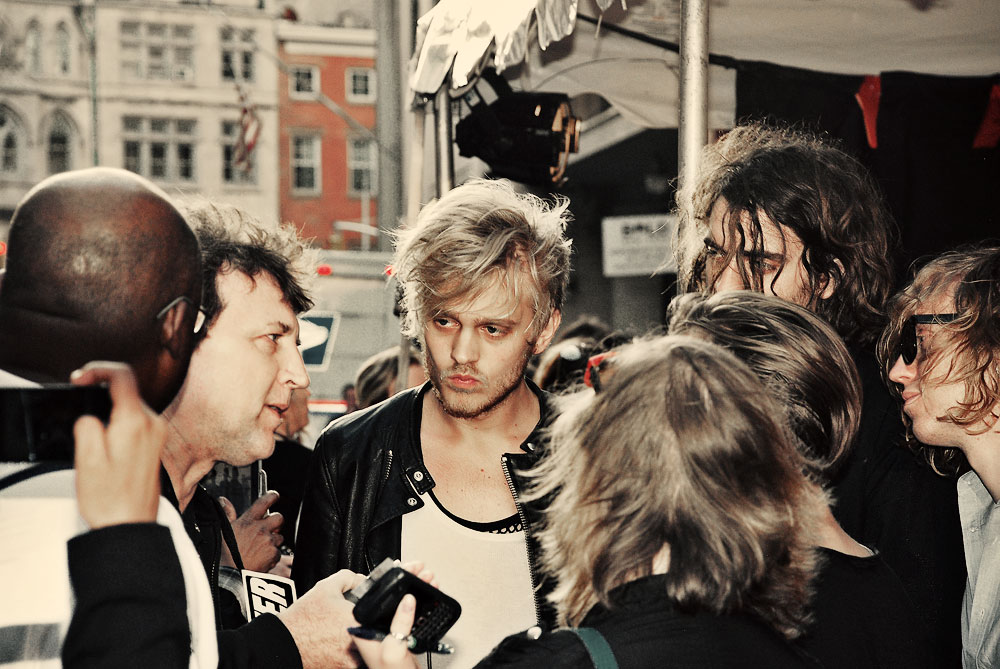 With their recent release of the Smile EP, The Royal Concept launched a mini 3 destination Texas tour. They visited San Antonio, Austin, and finally to our luck, Dallas. Unlike their previous Dallas show in 2013 with American Authors in the House of Blues, this year the show was inside the cozy intimate walls of Club Dada. All the way from Stockholm, Sweden, The Royal Concept gave Deep Ellum a royal night, making us wanting for more. After opener Parade of Lights finished off their great set by warming up the crowd, the main act took the stage, and when they did, they opened up with their new song “Smile.” Lead vocalist David Larson and guitarist Filip Bekic shared a mic while they sang deep resonating “yeah ooh yeah’s” while the rest of the band folded in and crashed in beautifully. The crowd was swaying along, many of the people unsure of the new lyrics, but enjoyed the upbeat instruments nonetheless. The band’s live sound resembled the sound of the record almost seamlessly, but there was some personalized touches that made the show feel cherished. The Royal Concept played songs from various discographies, despite the fact they only released two EPs in the US. Adding to the charm, the crowd felt even warmer (and went a tad wild) when Larson charmingly replaced the main lyric “D-D-Dance” to a personalized “D-D-Dallas.” They mixed up old songs with their trademark voice synthesizer keyboard and employed guitar solos full of fire and soul. The Royal Concept not only reminded you how genuinely human the five people on stage were, but also of how much musical talent they possessed. Lead singer David Larson was very interactive with the audience from beginning to end. He made the audience fall in love with the band even more with his charming conversation-like stories. He kept thanking the crowd for coming to their show, even after all the massive rain, which ensued the next song “Hurricane.” He kept the audience very engaged, reminding them that the band was from Sweden and there will be a lot of grammar mess ups and cheesy jokes. The way he worded his phrases when he continually thanked the audience and the sweet commentary all around incited many “AWWs” throughout the show. He even opened up the window for requests of songs, mentioning how he had no idea if the crowd knew old demos or found unreleased tracks on Pirate Bay (which the audience did).

Throughout the concert, both David and Filip constantly went to the front of the stage, standing tall and close over the audience. As David sang pop-fueled melodies out into the audience, he made eye contact with probably everyone there, smiling and purely enjoying the energy of Dada. He leapt off the drum set, jumped up and down the stage, and spun around in circles. Notably, his moves were particularly sassy when he sang “Fashion,” moving like a Vogue model. Percussionist Frans Povel powered the show with every beat, feeding the crowd every crashing cymbal and sharp snare. The harmonies filled the new tracks, truly showing a glimpse of Frans’s multitasking and musical skill as he sang and drummed flawlessly.

Towards the end of the show, the whole band lined up in front of the stage. They all exchanged words in Swedish, making the crowd excitedly try to read their lips as if they understood. It looked like the band was going to take a final bow, but they knew Dallas wasn’t done yet. David asked the crowd if they heard a song called “Cabin Down Below,” in which the crowd shouted for them to play it. There were some people who knew every lyric to this song unreleased to the US; everyone else was dancing to the really good vibes. The band finally ended the night with another non-US track “Girls Girls Girls,” bringing the audience to sing along to the catchy words they learned on the spot.

Before they left the stage, the band was extremely sweet. David told the crowd that they will take a short break and come back to meet people. They stayed true to their word and talked with fans and took pictures with them, which is something that main bands from across the ocean don’t normally do. Hopefully they come back for another night of nonstop gushing, dancing, and singing. Out of all the flooding rain outside, The Royal Concept remarkably gave Dallas life.