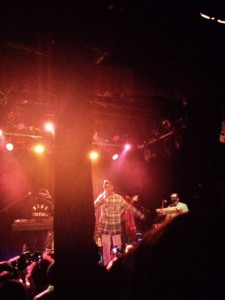 The Internet, a neo soul band from Los Angeles and OFWGKTA affiliates, drew a pretty large crowd at their show Thursday night at Trees. The crowed was filled with the typical neo soul/black indie types, huge afros, dashikis, frilly septum piercings, and I felt right at home. Trees, which is a small venue in downtown Dallas, was packed. The lights dimmed and smoke filled the room as the first opener came on stage. Bobby Earth, a native Houstonian, is a producer, singer, and songwriter whose mysterious sound filled the venue. His one man show, consisting of his voice and a synthesizer, captivated the crowd. Crowds can be pretty apathetic, even hostile towards openers, but surprisingly the crowd was really supportive of everyone who walked on stage. Next up was St. Beauty, an indie soul duo from Atlanta Georgia. Their performance was a bit of a mixed bag. The main vocalist was lackluster, and the group only performed about three original songs and a cover of “Twice” by Little Dragon. The final opener was Moonchild, a soul band from LA who sound vocally similar to Norah Jones, and sonically similar to Erykah Badu. The band even covered “Bag Lady” and the crowd was elated.  The most impressive thing about this band is that the vocalist was able to incorporate her flute and saxophone into the set, and it was amazing. The band eventually finished and the anticipation for The Internet could be felt permeating through the room. Unfortunately, the show did not have a resident DJ, and the house playlist that was on inbetween sets was randomized and not curated for the show, like someone took the aux chord and preceded to put it on shuffle. Finally, The Internet graced the stage, and immediately came out with one of their most popular songs, “Gabby”. It’s never easy to identify what kind of energy an R&B or soul singer is going to bring to a show. For example, a song like “Girl” off of the Internet’s latest project is a slow ballad, and many of their songs have a similar tempo. Despite my assumption, the show was really upbeat with great energy from the vocalist! The show continued with more hits from previous projects and the current project, Ego Death, which the tour is named after. The highlight of the night was when the band introduced a new song that tackles the philosophical question of “If God is real why does he allow suffering?” This song is somber and heartfelt. It arouses questions of our own existence. The beat slowly faded and changed from this to a more upbeat song “Dontcha.” The Internet’s performance was amazingly heartfelt, soulful, eclectic, and beyond expectations.