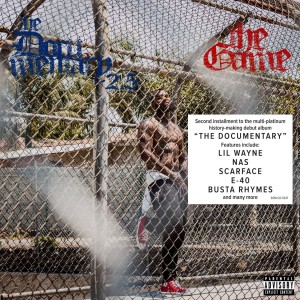 The Game comes back swinging hard with The Documentary 2.5, a follow up to The Documentary 2, the second part to his Documentary 2 release, thus making this The Game’s first double album, an achievement very few artists can claim, and even fewer can claim successfully. The album is an organic mix of old school hip-hop mixed with newer production methods, and it sounds extremely crisp and tight. Major names in the hip hop and rap scene join him, from the classic Nas and Busta Rhymes to up-and-comers like Schoolboy Q and Sevyn Streeter. A mix of serious topics like gang violence and drugs are interspersed with personal moments during the length of the album, which gives an intimate and personal touch. The Game continues to excel at what he does best: documenting vivid emotions and stories behind hard hitting production.

Documentary 2.5 starts off with The Game detailing his recent feud with 50 Cent and the rap crew he belonged to, as well as describing the Hot 97 incident in which a confrontation led to the death of one of The Game’s crew members. The next three songs are throwbacks to classic rap, with liberal use of trumpets and drum sets. The outro between “Gang Bang Anyway” and “The Ghetto” seems to signal a change in the album, especially relating to The Game’s transformation from a West Coast underground rapper to an established artist with a family. While the first  part of the album, Documentary 2, had features from some of hip-hops biggest names like Kanye West, Drake, Dr. Dre, Ice Cube, Q-Tip, Diddy, Future, and Kendrick Lamar, The Documentary 2.5 focuses more on west coast rappers like E-40, DJ Quik, and YG, and up-and-comers like Anderson .Paak and Seevyn Streeter. That’s not to say that 2.5 lacks in star power, because heavyweights like Nas, Will.i.am, and Lil Wayne still show up in spades. If you work in hip-hop in any capacity, you’re probably on this album.

“From Adam” cements this view, with Game saying “I’ve been at the bottom of the pits, you feel me?” The next few songs are much more mellow, delving outside the harder tracks that Game has previously released in his last Documentary. Muted drums, soft piano licks, and modern synths set the mood. Midway through the album, Game introduces the radio station WBALLS led by, laughably, DJ Easydick. This jazz and funk station sets the stage for a smoother section of the album, with “Quiks Groove”, “Outside”, and “Up On The Wall” having some of the funkiest beats of the album.

The rapid shift in mood with the brief interlude of Sex Skit turns the next two songs of the album back into the rough, hard rap that Game is known for. However, “Like Father Like Son 2” and “Life” interrupts this trend, providing one of the most intimate and personable looks into Game’s life. Featuring his younger sons on the track, the song shows how far Game has come from the rough environment of Compton to providing for a loving family who supports what he does. The album ends with the surprising collaboration “El Chapo” between The Game and Skrillex, injecting the classic hip hop with the dirtier sound Skrillex is known for.

The production on the album is incredible. The Documentary 2.5 sets an extremely high standard with how cohesive and full a hip-hop album can be. Furthermore, the album sets this standard while still maintaining relevance and quality throughout a wide variety of audiences and genres. Regardless of whether or not some critics believe The Game has departed from his old life to settle down, he continues to impress as a forerunner of hip-hop, making some of the grittiest and polished hip-hop today.