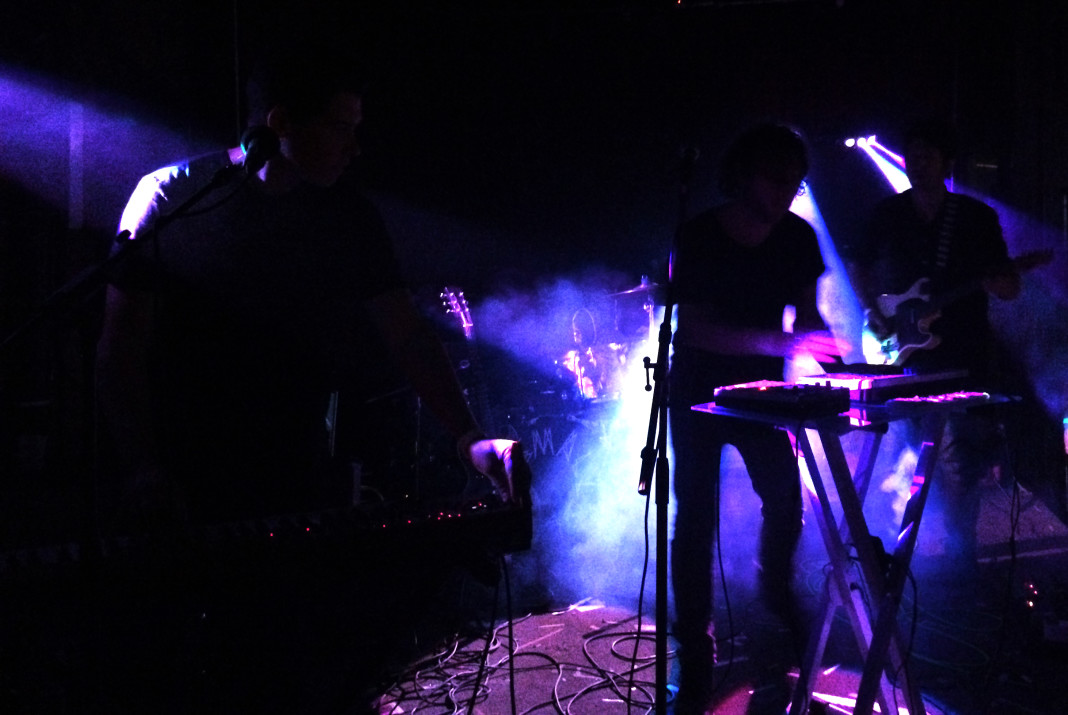 Club Dada was near bustling already at 9:00PM. People trafficked their way from the entrance to the bar and in between to get ready for the lineup. Nite was already set up and took to the mic to introduce themselves.

The Denton new wave brothers have been in and around Dallas in the recent years, including a couple times at UTD. They played their usual repertoire from their EP, singles and a cover. If you’ve heard their set before, nothing much has changed, but its good to see locals opening for bigger artists. Painted Palms impressed the crowd with their minimal setup yet intricate sound. The talented singer whaled on the guitar with crunching riffs and tinged solos as he beautifully chorused the songs in a way best related to The Virgins. The drummer kept perfect rhythm, also with stunning intricacy that puts a drum machine to shame, which they in fact had going in the background for the deep deep kicks for fullness. The combination of riding hats, noise, singing and a full synth setup played by a third band member was a nice followup to Nite and stellar opener for the soft, synth pop of Small Black.

The final act took about 20 minutes to setup, a large array of pedals, synth keyboards, fog machine and lights, but it was well worth the wait. I realized that the lighting dynamic was mild at best for the other two acts, and they could have used some color other than the dim red from overhead. Small Black planned ahead and readied themselves, so once each member was in position the main singer intensely cued the soundboard man to kill the stage lights and they began.

A jarring synth chord escalated from nowhere and prompted the crowd’s head toward the stage. The room was mostly dark and a haunting noise from the band filled the venue. A familiar track from their second album Limits of Desire was banged through the speakers, a cool afro-beat rhythm and associated ghost synths to set the tone of the show. The singer at this point was manning the keyboard in front of him, bobbing intently while looking down. The crowd began to sway a little as they made more elbow room from dancing. The front row stuck to their spot, probably mesmerized by all the lights. It was actually all very cool. The aforementioned fog had built up and diffused its way into the first few rows of audience members, creating an electronic atmosphere of cloud, colorful ambient lighting that strobed in-sync with the beat and beautiful music.

The chillwave is still strong with Small Black, but their new record Best Blues, released on 10/16, veers a little from the formula. The band aspect has taken the majority over drum machine and synth, creating a better lively setup fit for touring and performance. The older tracks, such as their first single “Despicable Dogs,” were modified to tie in better with the timbre of their show and sounded more updated to 2015. Other older tracks, such as “Free At Dawn,” and “Canoe” sounded fine in their original respected version, especially live, which was nice to hear not just from the new album. I waited to hear songs like “Camouflage” or “Photojournalist” but we can’t all be so lucky.

The set was a nicely constructed list and they didn’t fault on any fronts. Small Black ended the night with “Breathless” and then a followup encore. Half of the original crowd population had already left by this point, but a healthy amount of dedicated fans still lingered. I left during the encore into the now chilly fall evening from another satisfying Club Dada show.