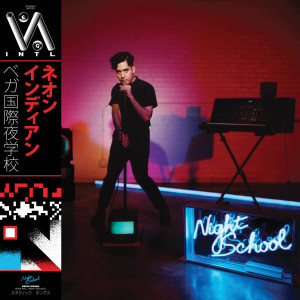 Denton’s own Neon Indian is back, and the chillwave progenitor sheds that long-dead genres vestiges for an album that is full of colorful synths and funk induced dance rhythms. It’s been 4 long years since the bands previous album Era Extraña, but front man Alan Palamo got the band together with new members to create an album that is not only a breath of fresh air, but incredibly inventive and original, whilst still paying an homage to genres of times past, like disco, funk, classic techno, and much more. VEGA INTL. Night School, the band’s 3rd album, is full of dance tracks that are catchy and vibrant. The group continues to draw inspiration from the early 80’s but this time in a spectrum, a more nuanced sense, rather than the heavy handed sound jacking of chillwave’s heyday.

This means that you hear some funk, disco, and R&B, not just variations of 80s synthpop like before. The variety in VEGA INTL. cannot be understated, from tons of different beat changes to genre influences from all over the electronic music map. For instance, you hear some Grace Jones or Howard Jones styled reggae-pop tunes like “Annie” and “61 Cygni Ave”. Also, there are some 80’s R&B sounds that are reminiscent of The Mary Jane Girls and New Edition in the song “The Glitzy Hive”. Front man Alan Palamo doesn’t let us forget that he is a songwriter and a great one at that, and wrote (what sounds like) a fantastic a to Prince with “News from the Sun (Live Bootleg)” with guitar chords that jump and are followed by some heavy drums. Meanwhile, his sunken voice is filtered by some echoes.  Don’t get it twisted though. This is not a cover album.

This album obviously draws from some diverse influences, whether it’s pop, funk, or R&B. However, Neon Indian have made it their own. There are still one minute interludes included in the album that make you wish they were longer like “Hit Parade”, “Bozo”, and “Slumlord’s Re-Lease”, but they serve as good connecters between longer movements, and make the album more artful as a whole. The band still does chillwave-funk slowburners like “Baby’s Eyes”, but with a more deft hand. There’s not a lazy moment on the album, as the whole project feels high stakes. In a blog-driven music scene where critics will eat you alive for not progressing or immediately label you something you might not necessarily want (which this band probably knows better than anyone else), it’s refreshing to see Neon Indian not only exceed expectations, but truly destroy any pre-conceived notions people have about them and their music. They focused on songwriting in their own music while keeping the classics from the 80s in mind. The result? An album that sounds slightly nostalgic but gets you to the dance floor immediately, and one of the most exciting of the year.