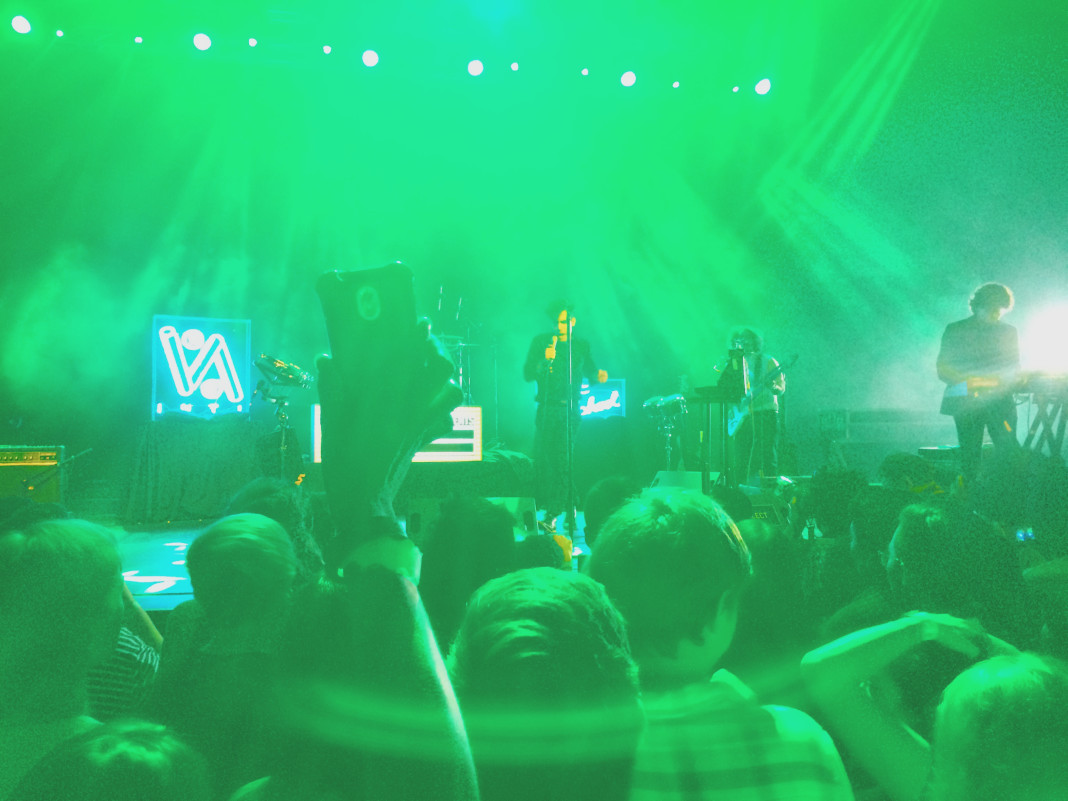 The Bomb Factory, in its most recent history, has been gathering larger and larger crowds to fill its vast space, fit for the rising local and renowned acts alike to perform in front of. The kickoff to the autumn concert season couldn’t have displayed this any clearer, as people piled into the venue. Whether they were in attendance for The Outfit TX, Bayonne or the anticipated return of Denton based Neon Indian, a wide mix of concert-goers swayed, moshed and danced along to the solid set the Red Bull Sound Select in association with FFF Fest brought together in one large-scale single night event . Bayonne started off with a one-man electronic set, setting the ambiance with a loud reverb mesh of kicks and claps to a slow, mellow tempo. The massive backdrop pulsed in-sync with the wide rhythms as light flashed, creating an expansive vibe that many of the early-comers definitely seemed to enjoy. Bayonne himself bobbed to his own music on stage, headphones on and fingers on the decks as he modulated the frequencies of his synthesizers. More people trickled in throughout his set and settled into the standing room or the side balconies. He thanks the man on the visual effects and the audience, allowing the prep crew to make room for The Outfit TX.

It seemed there were just as many people outside as inside in the designated smoking area. I made my way outside to check it out and caught some bright fluorescent light and the smell of an alluring food truck food aroma. All of that was masked by the haze of cigarette smoke that oscillated in density as people came in and out through the door. That’s when I heard the first instance of The Outfit TX talking into the mic and the nasty bass drop as the hype ensued. Making my way inside, I confirmed this.

The trio, all with mics in hand, enticed the crowd to get wild with the tracks. Hip-hop production swelled the zone and clicked steadily, having everyone on the floor bounce along in a smooth jig and grinding sensation. Later into the set, some people about 3 rows from the front got a little too rowdy, probably just what The Outfit wanted, and a moshed ensued. The faces of the first and second row people were either amazed or furious, but it didn’t hinder the harsh pushing of the mosh. The member of The Outfit with his shirt off smiled and approved of the ruckus. The last track he mentioned to the audience that they were happy to be back in Dallas, their home town, and that their last song was going to be the most restless of them all, so they brought out a few masked hype-men to get the crowd jumping. A couple of them actually jumped down into the pit and joined in on the mess, adding to the sweat saturated air of the crowded front area, shortly finishing their set afterward. After a quick intermission, the headlining act Neon Indian walked on stage. The full 5-piece band assumed-role of their instruments. Neon signs blared; the VEGA Intl: Night School logo shown bright next to the amps matching the album cover of their upcoming release. Alan Palomo, the handsome front man of the act, took to the mic and began singing a unheard track from their new album. In a script-like manner, he mentioned his “3-year” intermission since his last Dallas appearance and how crazy it was to be back with so many fans. He immediately jumped into the next song. Absorbing the look of the set-up, the canned light coordination, the gentle haze floating on the stage and the sheer size of the event, it seemed very rock & roll. Only pertinent due to the contrasting history that Neon Indian once was. This was all emphasized by the music. Neon Indian very much were touring on the new record, a strong majority of the songs being unheard, except for the few pre-released singles, “Annie” and “Slumlord.” But, of course, it would be a disservice to neglect the older hits, so in an apologetic manner Palomo introduced “Psychic Chasms” as the “what-would-be-hit” in his eyes and played it amazingly. The finesse of the live band playing older sample-based, electronic songs was nice, prompted from years of touring and performing them without a doubt. “Deadbeat Summer” was also a crowd favorite as the classic phaser-guitar enveloped the room and the simple beat thumped through.

Palomo’s singing was also a something to note. His attempt at a large falsetto repertoire seemingly unphased him as he glided from front of the stage to the middle to the side around his Korg MS-20. He should have been exhausted. Regardless, he pitched through the tracks and brooded at the back of the audience in a focused glare. He intermittently directed the mic to the audience, as if we new the words to every old track, and smiled, maybe from the fail of lyric articulation or the sound of 200 people mumbling at the same time.

Granting a little room for analysis, the new record seems to be very much pop-ska-rock oriented. The aesthetic of the neon signs and future-disco style sort of confuses these aspects together, so whatever was played live probably shouldn’t be judged until the record is officially heard in its entirety. It is a very different approach from the group, nonetheless. All analysis aside, Neon Indian’s appearance back in Dallas was a cool occurrence and made for a good event. Red Bull Sound Select proves to be the pro curators they make themselves out to be and we’re down to see what else they bring to Dallas. 3-dollar shows are awesome.