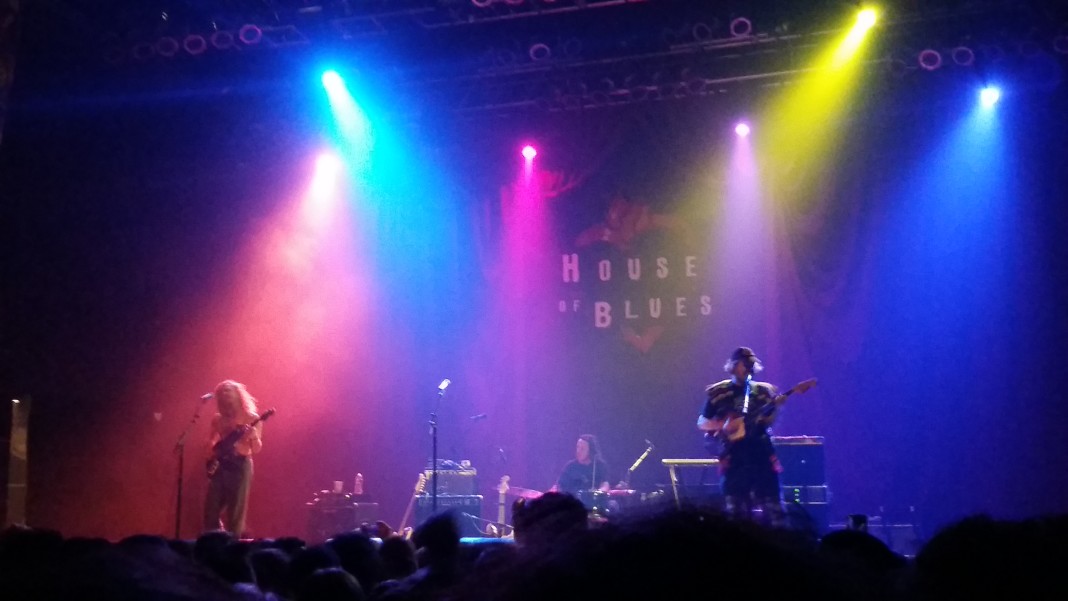 The hum of jubilant chatter echoed in-between elated Mac fans. The crowd was an endless sea of snapbacks, red Vans, and Marlboro Reds. The level of coolness was off the charts. The ages of those in the crowds from every age in between high school students to middle aged adults, all anxious to witness the Pepperoni Playboy grace the stage with his charisma.

As the clock struck 7:59 PM, the first act advanced onto the stage. Walter TV is a band comprised of Pierce McGarry, Andy White, and Joe McMurray, all of which are part of Mac Demarco’s ever-growing gang of affiliates. With modulated vocals, Pierce jammed out on stage with the energy of a pack of dancing kangaroos. Walter TV brought an altogether solid set of songs mostly from their album Appetite, thus, succeeding in only feeding the fire in the tummies of the Mac Demarco fans in the crowd.

After a long break, Alex Calder and his band walked on stage. With a Fender Musicmaster in hand, Calder drew the attention of his audience not only with his dreamy jams, but his polite demeanor by thank them after each song. Calder’s relation with Demarco can not only be noted from their times in Makeout Videotape, but can be heard through their solo music. Both have a very laid back vibe in their style of composition. Calder’s music excels in providing atmosphere, and busier bass lines than his contemporary. His set contained some new material that was tantalizing to the ears. But as he thanked the audience one last time, the audience knew what was just around the horizon.

The lights turned down. Haddaway’s “What Is Love” boomed through the PA system. The crowd roared for their mellow master. Mac Demarco and his crew waltzed onto the stage with a sense of triumph, like heroes returning from a long quest. Demarco hasn’t performed in Dallas since a free show in 2012 at Bryan Street Tavern, and since then, has become a star in a short amount of time. Demarco greets his audience and insists that they, “Relax”, and enjoy the show. Opening with “The Way You’d Love Her”, the opener for his most recent release, Another One, Mac played into what the crowd ached for. Mac Demarco gyrated his hips to his own silky grooves and sultry melodies. He hopped around the stage as he went from crowd favorite to crowd favorite. With selections from 2, Salad Days, and Another One, Mac was able to efficiently keep the audience in a state of pure bliss, and the audience ate it up. His Stratocaster acted as a wand, with which Demarco was able to elicit a cheer from his endearing fans.

Although extremely fun, Demarco’s set was predictable. As the set went on, it was as if the next song could almost be smelled. And this is in no way a negative characteristic for Mac Demarco and his audience. Mac fans enjoy him for his solid compositions and consistent catchy melodies. And even with his virtuosic abilities, Mac Demarco decides to focus on writing and performing songs that he and the audience can both enjoy. Demarco knows that he and his audience will “always go together”.