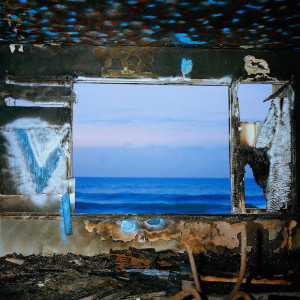 Two years have passed since the release of Monomania and Deerhunter are back once more, this time with their seventh album release, Fading Frontier. The new album sees the band ditching the gritty garage-rock sound they adopted during the Monomania era and instead has them creating music that could be set in an alternate underwater-reality. It’s not only Deerhunter’s sound that has seen an overhaul, the band as well as its members have undergone many changes over the past two years. This new album sees the band ditch Frankie Broyles who had joined them as guitarist during the Monomania era. Guitarist Lockett Pundt, on the other hand, recently became a proud father to a baby girl, while Bradford Cox was in a car accident that nearly took his life. Perhaps it’s a result of getting older, or perhaps it has to do with the magnified attention to the beauty and fragility of life, but Deerhunter seems to have found some contentment amongst the madness, and the new album is a reflection of this.

Album opener “All the Same” with its entrancing guitar intro and the incessant thumping make for a buildup that climaxes with Bradford snarling the lyrics “You should take your handicaps / channel them and feed them back / Till they become your strengths”. The conviction with which Bradford delivers these lines makes the listener feel as like they are overhearing what was once an intimate moment between Bradford and his thoughts regarding living with Marfan syndrome, only to adopt this empowering motto into his onstage antics. “Living My Life” which is the latest single off of the album, and “Ad Astra” are both embodiment of the dream-like guitars and textured synths, all which seem to cascade into one another that are found throughout the album. “Ad Astra” might have been Pundt’s only lyrical contribution to the album, but just as his Halcyon Digest standout track “Desire Lines”, Lockett makes his efforts count and builds a wall of sound. It is increasingly difficult for listeners to not get lost the textured tides created by Pundt.

However experimenting with the sparse and atmospheric sounds doesn’t always work out for the band, the sixth track of off the album, “Leather and Wood”, attempts to create a similar somber ambience but it fails to evolve into anything. It is the longest track on the album and drags out with no real culmination, not to mention its odd placement mid-way through the album. Any momentum the band had gained gets lost all thanks to this almost six minute-long song.

“Breaker” and “Snakeskin” which are both singles, represent a Deerhunter we are more familiar with, loud and abrasive all tied with Bradford’s use of sardonic lyrics. “Snakeskin” is the grittier of the two songs and its upbeat tempo sure to get anyone out of their chair. “Breaker” with its rhythmic and jangly guitars and the first ever duet between Bradford and Lockett make this song one of the highlights of the album. “Breaker” references Cox’s near death experience the closest, nowhere else is it more apparent just to what extent the accident affected Bradford than when he sings “and when I die/ there will be nothing to say/except I tried/ not to waste another day” about his newly acquired outlook on life.

The cover art of the album appears to be the aftermath of a room on fire, the walls remain standing despite the damage, a window space remains, its still showing the unobstructed beautiful view of the ocean. The picture is overpowered by the blue hues of the body of water, although our point of view shows the debris left by the fire its not difficult to imagine oneself running and swimming in the ocean. While the building will be rebuilt and we’ll be able to enjoy the ocean once more, Bradford notes on “breaker”- “I’m still alive, and that’s something”.