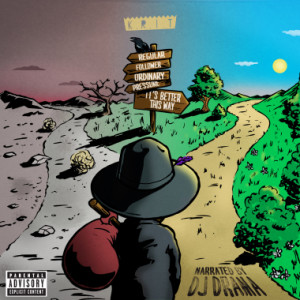 Let’s get this out of the way. Big K.R.I.T’s new surprise mixtape It’s Better This Way doesn’t bring anything particularly new or innovative to the table, or even to his rapping career. It’s exactly what you expect from Big K.R.I.T: heavy kick beats, catchy hooks, and solid flows. His latest release isn’t meant to inspire or revolutionize; rather, this mix is meant to be enjoyable and approachable. With features from the likes of Ludacris, Young Dolphin, and Warren G, it’s hard to deny the appeal of his southern sound. Although a few gems are scattered throughout his mixtape, this release doesn’t offer anything particularly new. What it does offer is more Big K.R.I.T., and if you want that, then dinner is served.

It’s Better This Way starts off strong with “King Pt. 4”, a smooth jazz opening featuring warm trumpets that immediately clash with the follow up “86”, a song with a hard beat and steel drums. The album is filled with these contradictions, with Big K.R.I.T effortlessly flowing between trendier hip-hop styles and classic rap beats. “Piece On Chain” is a self-produced song filled with instrumental samples and vocal patches, accenting the flow of his lyrics. From here, the album is a little more scattered, with songs like “Shakem Off” and “How Bout That Money” taking a brief detour into older rap styles, with its heavy emphasis on the break beats.

“Vanilla Sky”, “Got Me Thru”, and “Can’t Be Still” brings back the same smooth ambience we heard earlier on the mixtape, making good use of an ethereal sax layered with K.R.I.T’s more serious lyrics about his lifestyle and yearning to find meaning, mentioning how “it’s lonely at the top, but the view is beautiful.” The album ends on a more serious note with the title song “It’s Better This Way”, an anti-modern rap song criticizing the current industry. Reflecting the low-key release of It’s Better This Way, the mixtape is both a nostalgic throwback that signals modern trends.

It’s Better This Way serves as a great summary to Big K.R.I.T’s career. It takes the more polished aspects of his previous releases like Cadillactica and Krit Wuz Here and mixes them. Overall, the album has a more mellow tone then what we typically see from K.R.I.T. The release does a great job in appealing to his diehard fans, while remaining relevant to new listeners. Don’t let the slight lack of innovation or new styles dissuade you from giving this mixtape a listen, but if you seek a mind-bending and revolutionary musical narrative, look elsewhere. Although the consistency in quality throughout his discography points to an artist who is fully comfortable and skillful with his style, It’s Better This Way is a sampling of only some of what Big K.R.I.T has to offer. For those looking for a progression and evolution in Big K.R.I.T’s sound, we can only hope to look forward to his next release.