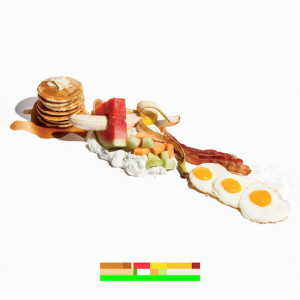 Battles has always been a band with multiple, complex dimensions. On one hand, they are well respected by hardcore fans of both rock and electronic music, and on the other hand they have songs featured on the Little Big Planet and Twilight Saga’s soundtrack’s (to be fair, those soundtracks did have some fire on them). The New York trio’s brand of experimental rock; a blend of art-rock, math, electronic, hip-hop, and a lot more, brings about some incredibly emotive and layered tracks, as seen on their 1st album Mirrored. When the bands vocalist and guitarist (and also a great electronic musician in his own right) Tyondai Braxton left the band in 2010, founder Ian Williams and crew decided to take a slightly different direction on their 2nd album, Gloss Drop. It was more good “Battles music”, but critics were split, not heaping on the same praise that Mirrored was lauded with. With the bands latest project, and their first since 2011, La Di Da Di sees the trio go in familiar directions with mixed results.

Battles continues their experimental streak, though no new crazy genre bending is introduced here. What you have is experimental rock songs with heavy electronic influences, and for the most part the tracks succeed in this area. What’s lacking here is diversity. No real freshness is added to these songs, and a sort of routine begins to set in. The fact that these songs can even get repetitive is the most shocking part, because the music isn’t as apparently loop based as most other experimental electronic music, and the songs can feel like they’re piling on too many ideas at once. Album closer “Luu Le” is a good example, and even though it stands at 6 minutes long, it feels a lot longer by the time you’ve reached this point in this relatively short album. It would have been nice to see the introduction of something like jazz elements into the album, or even more harsh electronic sounds. It feels as if La Di Da Di can’t settle on something harsher or something funkier and ends up not even being a middle ground between the two.

The many interludes and shorter tracks on the album, excluding “Cacio e Pepe” and “Flora e Fauna”, are generally some of the most boring bits introduced here. However, there are some high points that almost reach brilliance. An almost Indian like sample introduces an infectious rhythm in the last few minutes of opener “The Yabba” and the layering of guitars on top make this an auditory pleasure. The more subtle and understated ending of “FF Bada” and the entirety of “Dot Com” are Battles at peak form, and truly show that the band can balance infectious grooves with experimental sounds. However, some huge missteps like “Summer Simmer” bring the album down to the low points where the interludes reside. Who exactly this song is for isn’t exactly immediately knowable, but what is sure is that it’s beachy guitars only shine through in select moments, and most wouldn’t choose the chaos of a song like this over the latest top 40 hit to soundtrack their summer escapades.

Battles hasn’t lost their touch for what they do best, and this is evidenced by songs like “FF Bada” and “Non-Violence”, but what they fail to do here is innovate on their established sound. The lack of vocals and diversity in tracks adds up to an album that feels all too familiar. Battles still manages to create a soundscape that is all their own, and that few bands can replicate, but a much more clean and sterile one, and from a band of this caliber, much more is expected. However, when La Di Da Di is firing on all cylinders, few other bands can match its, and Battles’ inventiveness and energy.