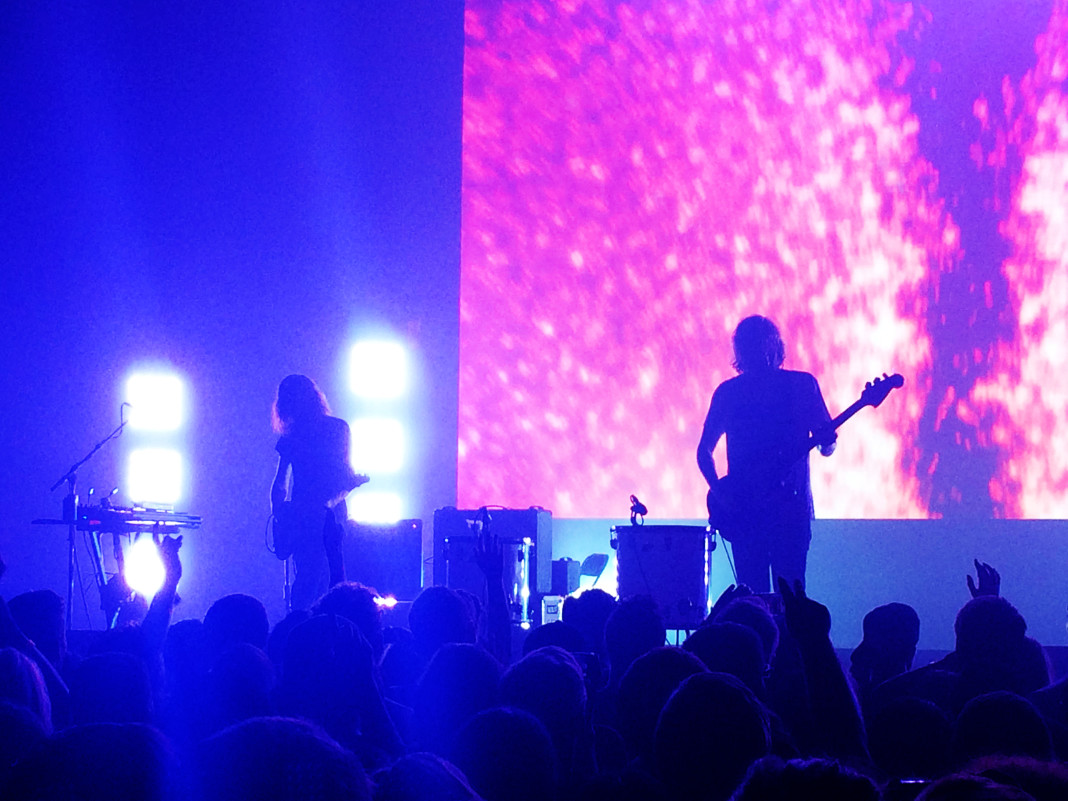 The Bomb Factory had a small line outside its ticket booth. I had arrived fairly late; Hot Sugar had already performed and left, and I could here the low-passed bass of “Loud Pipes” in the background vibrating through the open door of the venue. Upon entrance to the main floor, the place was packed. Even the sitting room near the back had little mingle room around the tables as people passed between to chat with the next person or grab their beer. Ratatat was already in full swing.

Ratatat were 3 songs in as the stage boomed thick bass notes and synth cords in the crowds direction. From the back, it sounded pretty good. Considering the massive size of The Bomb Factory, I was surprised at how balanced and clear the music was. It was a thrilling experience to feel such loud music, and if you are familiar with Ratatat then all the better. “Falcon Jab” was the next song on the set list. The familiar pedal-steel guitar was strummed by Evan Mast as he established the build. The beat came in, a tribal rhythm chopped and sampled together in a syncopated head-bobber. Then enter the wailing guitars, the most iconic of Ratatat sounds. The reverse sound effect blared and at that point I knew I was at the Ratatat show I anticipated.

The set consisted of a thorough, broad selection from their discography, barring the bootleg remix mixtapes they made from Ratatat Remixes Vol. 1 & 2. Tracks from Classics seemed to evoke the most response from the crowd, such as the progressive “Mountanita,” “Lex,” and “Nostrand,” the latter dropping into a stellar atmosphere of crunchy guitar, lasers, lights and epic conclusion. Other songs such as “Neckbrace” and “Drugs” were also reported favorites, entering with their respective spoken-word intros and hitting immediately into the thick bass riff typical from their LP4 album.

What I didn’t hear much of were tracks from their latest release this year, Magnifique. Perhaps within reason, due to the mild nature of the album and its tendency to avoid catchy afro-beats or any real music depth. You can read our thoughts of Magnifique here. They did play the title track and one other, serving as interlude fillers between harder hitting songs. They made up for the lack of energy with stunning visuals, really a different and equally great video loop on each and every song, that was projected large behind them. As stated before, lasers were efficiently used and very potent in audience effect. The beams shined low just above the audience’s reach, creating a surreal canopy of fluid light and color that oscillated with the rhythms. In fact, the most impressive part of the show were the effects. The imagery was a beautifully crafted array of geometric volumes being manipulated into textures and hypnotically panning into and out of the plane that is the screen. The parakeet of LP4’s album cover was duplicated across the backdrop many a time and utilized for effect as well. Shattering greco-busts collapsing to the heavy kicks on one of the tracks was my particular favorite. Towards the end of the set they flashed the updated RATATAT logo during a guitar flare solos, sending guitarist Mike Stroud’s pick hand windmilling into the air and the crowd’s ‘rock-on’ fists skyward as well. It was all very metal.

The two finished on “Seventeen Years,” naturally, and left the stage only to return for the encore. The finale, “Shempi,” was a very interesting choice and a nice one at that. The two brought forth large tom drums and played an extended instrumentation on the loop of the climax riff and ended in a sparkling explosion. The RATATAT logo came back on and they waved goodbye, shaking a few front row fan hands first then exiting for the last time.