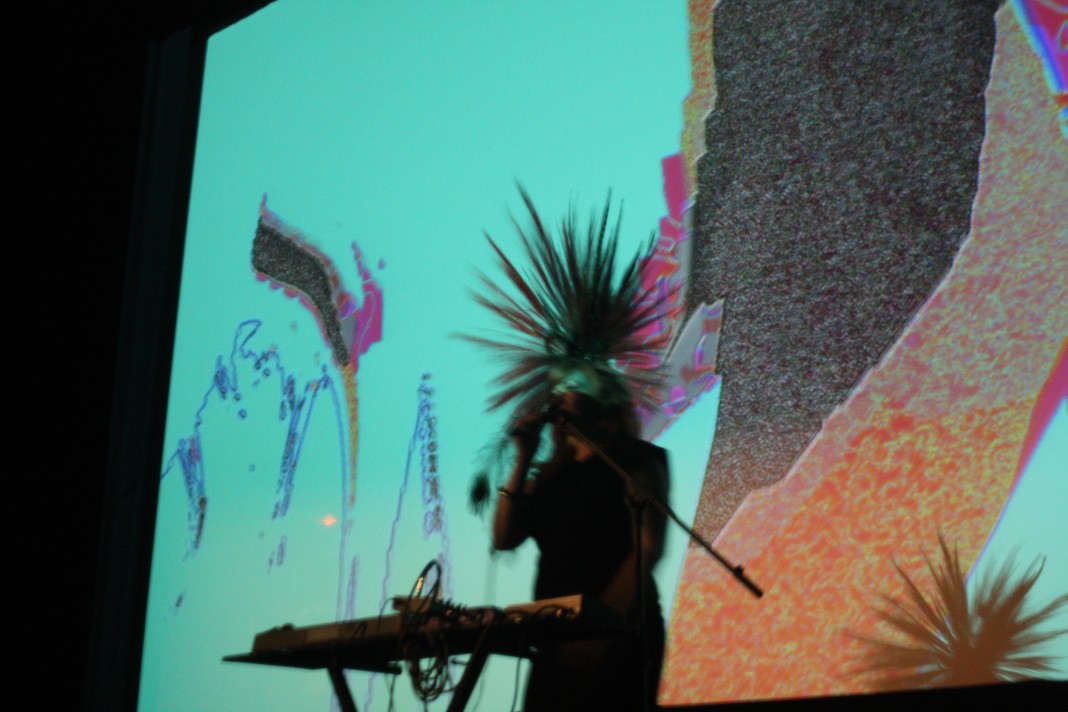 Friday night’s Dallas Ambient Music Night VII (DAMN) saw a transition for the series into a new atmosphere at the historic Texas Theatre. Generally held in the more DIY-friendly, and less formal Green Elephant, the night was immediately colored by a combined sense of austerity, and a “from malt liquor to craft beer” confirmation into the big leagues. DAMN is a monthly event held in North Dallas for ambient and noise artists, combining these with visual animation artists for a multi-sensory immersion into a different, calmer realm.

To kick off the night, Merica lit up the theatre with his first live performance. Paired with visual artist John Barker, Merica swept the audience into a world of dusk and darkness. Using a minimal setup with only a mixer or two, his sweeping low synths and darkwave rhythms paired perfectly with Barker’s “special Super-Harvest Blood Moon Eclipse edition, capping an epic Lunar Tetrad”—a series of city and cosmo-scapes projected across the theatre’s 38ft screen. Even if it was a brief one, Merica’s inaugural performance proved him to be a promising new artist on the North Dallas ambient scene.

Second up was the jazz-guitarist turned lullaby technician Neil Coburn, paired with the psychedelic projections of Thor Johnson. The duo paired the heat of Coburn’s quick licks and fade-ins with a cool side of a smooth warping visual backdrop. A complex and stylistically scattered performance that stimulated the auditory cortex, the visual cortex, and the chaos cortex in equal parts. The synergy was palpable, and was a study in the complexity that can be achieved in the realm of “ambience.”

Shattering the curated complication of jazz ambiance, Bare Mountain, alongside visual artist Brian Tomerlin, introduced the noisier dimension of ambient music. Bare Mountain brought an unadulterated raw sound to the stage, improvising where appropriate and ravaging the airwaves around him. A more industrial set than usual, Bare Mountain provided the crescendo for the evening. Tomerlin’s visual set was remarkably different in that his was the only of the night that was a performance, rather than a prerecorded clip. Live mixing visuals on a variety of CRT sets and mixers, technical difficulties stood no chance before the dually digital and analog chaos Tomerlin was hellbent to create. The sonic and visual assault demanded the unwavering attention of all, and wracked minds in its wake.

The centerpiece of the evening, Lilly Taylor, took breaths away. Paired with visuals from her husband Sean Miller, and sporting a peacock headdress, her persona transcended the theatre she was in and transformed into the performance of a rite. Surreally slow geometric visualizations framed a voice and figure that haunted all. Taylor’s control and talented utilization of her voice as both an ethereal and haunting instrument spoke to the souls of all present. A wholly unique and infinitely deep cross between Juliana Barwick and Karin Dreijer Andersson, Taylor swept from soaring cries to abyssal loops seamlessly in her performance. The combination of her talent, visual presence, and dreamlike unity formed a celestial vision gracing the Texas Theatre. A cut gemstone among sediment.

I unfortunately did not catch the subsequent performances by synth pop duo Ethereal and the Queer Show or the ever-angelic moth face, nor their paired visual artists. I well know that these artists never disappoint, and it’s to my regret I had to leave early.

The next DAMN show will occur on October 24th at the Green Elephant.