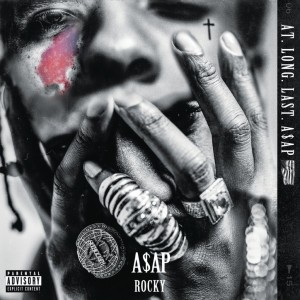 A$AP Rocky’s third project, aptly titled At.Long.Last.A$AP, can’t be mentioned without the recognition of the untimely death of Steven Rodriguez, better known as A$AP Yams, de-facto leader of A$AP Mob and hip-hop tastemaker extraordinaire.  Starting from his hip-hop centered blog, realniggatumblr, Rodriguez was instrumental in the rise of A$AP as a brand and as a music collective. Curating their persona, style, and sound, it came as no surprise when Rocky’s first real project, Live.Love.A$AP, made waves across the internet in 2011 like few other mixtapes do in this era. Thus began the era of A$AP. Millions of kids across the globe wearing Hood By Air, Jeremy Scott Adidas & gold grills, the rise of cloud-rap, swagged out flows, the out-of nowhere rise of A$AP Ferg, and so much more that seems commonplace now. Now, after Rodriguez’s death, A$AP Rocky has released what is probably his last album with Yams’ oversight, that serves as both an evolution of the sound he popularized and embedded in culture, and as a touching love letter to his leader and best friend.

Whereas his debut album in 2013, Long.Live.A$AP, saw Rocky taking his signature sound and pushing it to its most exciting and explosive conclusion, A.L.L.A makes almost a full 180 degree turn towards psychedelic rock influences. From the constant appearance of singer-songwriter Joe Fox, a homeless 27 year old that Rocky picked up off the streets of London, to the albums standout use of psychedelic influences, L$D, Rocky wears his influences on his sleeves. It’s a bold move, but one that doesn’t necessarily work all the time. L$D in particular is the most experimental song of Rocky’s career, mixing cloud rap and Jimi Hendrix guitar riffs, but suffering from some off-key singing from Rocky. Songs like M’$, featuring a spastic verse from a recently rejuvenated Lil Wayne, and Everyday feature some of the same singing problems. Everyday in particular ham-fistedly samples Rod Stewart and has Miguel crooning Stewart’s hook verbatim again for no apparent reason. It’s a huge misstep and something only Mark Ronson could think was a good idea.

For every experimental misstep, there’s moments that work very well and are borderline brilliant. Canal St. paints a vivid picture of Rocky’s upbringing with a vocal interpolation of the word “hustle” and a hard hook from internet cloud-rap progeny Bones. You can’t say Rocky never took care of his own. Songs like Excuse Me and Jukebox Joints are fresh takes on soul sampling beats and allow for Rocky to showcase his new and improved rapping. Jukebox Joints in particular features another classic Kanye guest verse and Rocky rapping at his finest over a Kanye-produced drumless soul sample. One of the albums biggest highlight’s, Lord Pretty Flacko Jodye 2 (LPFJ2), comes roaring out of the gate with amazing g-funk synth production and some of the most intense bass on any album in recent memory.

Rocky’s subject matter has expanded with his sonic palette. He still speaks about being the biggest fashion influencer in rap since Kanye, women, and the opulence of the rap lifestyle, but with his improved rapping comes an expansion of his themes. Max B in particular flips the parable of the jailed Harlem rapper who was on the brink of stardom, into a song about police brutality and institutional racism. Rocky explores fame, love, and social issues in a way he only touched on briefly in his prior 2 albums. It’s refreshing and gives the project a lot of life coupled with Rocky’s wildly improved rapping ability.

Rocky ends the album with Back Home, a nice closer that features a M.I.A Mos Def back in full form, and a message to the world from A$AP Yams talking about what “coolness” is and plans for world domination. Rocky realizes that is was with Rodriguez’s help that A$AP was able to take over the world, and it’s a beautiful send off to what was one of the most important voices in hip-hop, and our generation’s Dame Dash or Diddy. While A.L.L.A might not be the most consistent or well-thought out album, it is cohesive and has a vision for the future. Experimenting and inviting guests like M.I.A. and Future (on the same song at that) to experiment with you can come with a lot of hazards, but Rocky takes a brave step forward and honors his friend Yams with a great blueprint on how the future of rap could look. It’s important to look at At.Long.Last.A$AP as a bold experiment in where the art-form could go, and while it has a few missteps, it truly has a vision and verve that should be applauded.